Emma Raducanu was put in an awkward spot during her on-court interview after thrashing Victoria Azarenka at the Cincinnati Open on Wednesday. The Brit showed no signs of fatigue after breezing past Serena Williams less than a day previously as her momentum continues to grow before the US Open.

Raducanu took just over an hour to dismantle 23-time Grand Slam champion Williams on Tuesday night, coming through 6-4 6-0. In the process, she became the first person to ‘bagel’ the American since compatriot Johanna Konta back in 2018.

She followed up that eye-catching win with another over Azarenka on Wednesday. The 6-2 6-0 scoreline was similarly emphatic against a player who has two Australian Open titles on her CV and reached the US Open final as recently as 2020.

With a 40-year-old and a 33-year-old both cast aside by Raducanu, the teenager received a comment about ‘respecting her elders’ that took a moment to sink in. 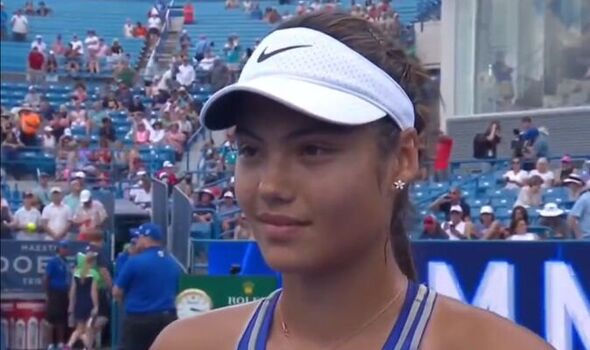 Fresh from the win over Azarenka, the interviewer for Raducanu’s on-court chat began: “I’m not sure if anyone has ever taught you about respecting your elders because… yikes!” The Brit initially looked puzled before the interviewer added: “Serena, Vika, bagels sets against both of them.”

The comment was then eventually well-received and talk swiftly turned to her performance. She said: “I just had to focus on what I could control, and in the points you can’t think about who is on the other end of the court. You’ve just got to play the ball.

“I think I have tried a lot of things, and this year I think some matches, I have lost a lot of matches from leading situations and probably just played too tense. I think that I just need to swing, and I just said that these two tournaments, or this tournament especially, I’m just going to swing freely and take that and see what happens.”

Next up for Raducanu is an intriguing clash with American seventh-seed Jessica Pegula on Friday. The break between now and then will surely be welcomed by the Brit after a delayed clash with Williams was followed by a showdown with Azarenka just 18 hours later. 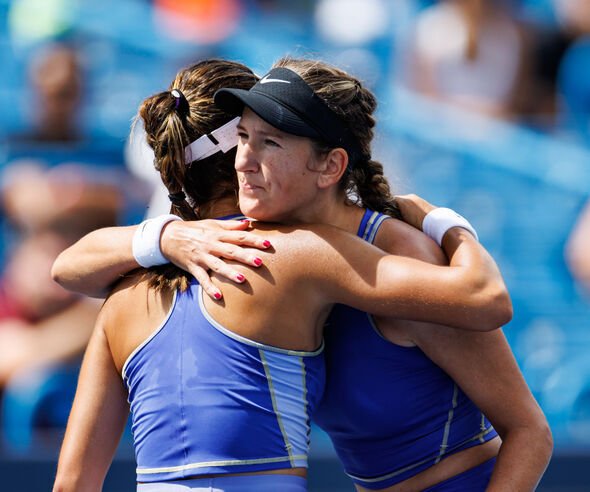 Pegula is in good form this year and reached the quarter-finals of both the Australian Open and French Open. She will be hoping to better her previous-best run at Flushing Meadows with proceedings due to kick off in just over a week, having never gone further than the third round.

Raducanu wrote her name in the history books at the US Open last year by winning as a qualifier without dropping a set. Her Grand Slam performances have left plenty to be desired since but momentum appears to be moving in the right direction ahead of her title defence.