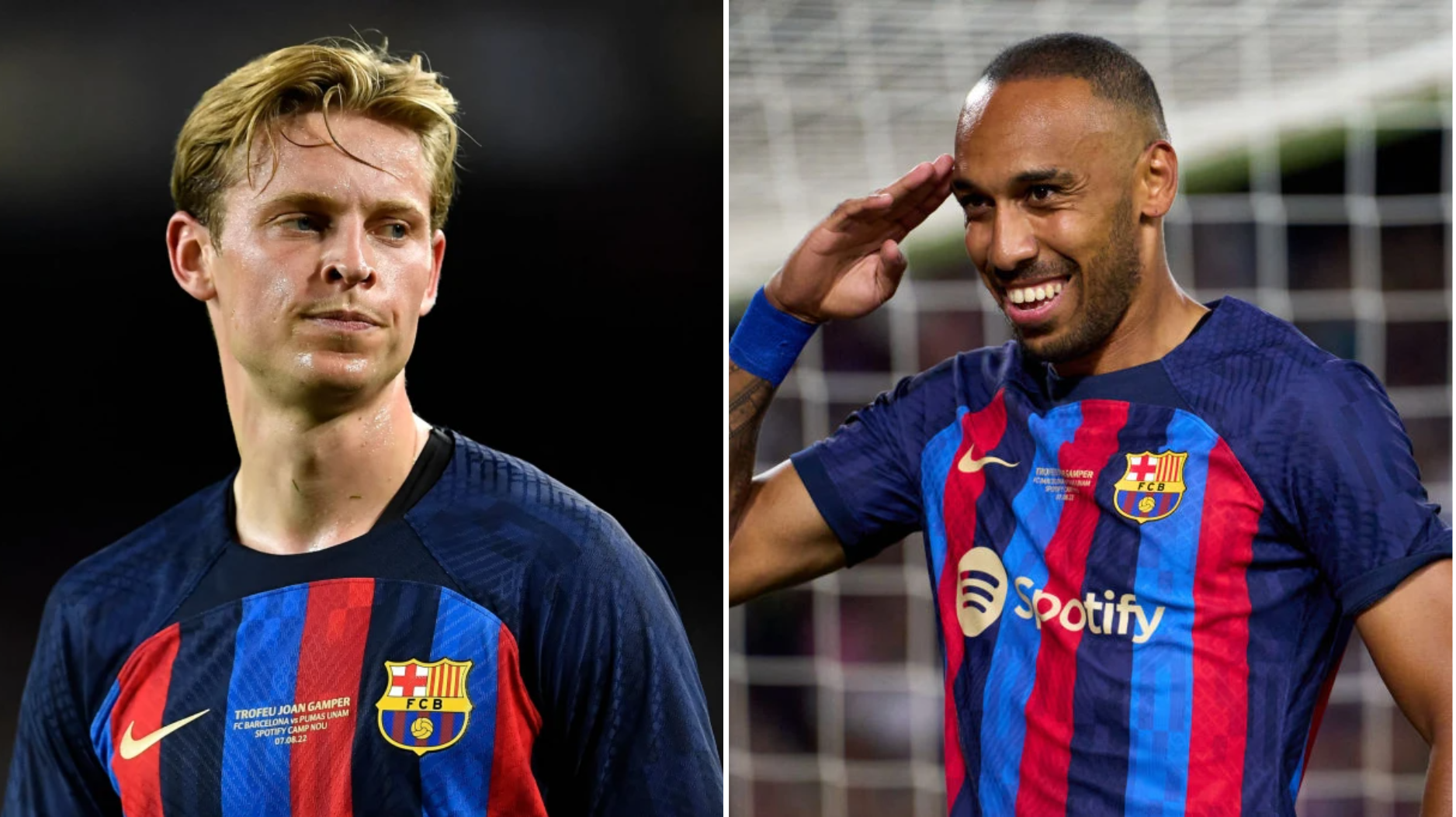 Barcelona manager Xavi insists he is counting on both Frenkie de Jong and Pierre-Emerick Aubameyang but has not ruled out both players leaving before the transfer window closes.

Manchester United have been chasing a deal to bring de Jong to Old Trafford throughout the summer with Erik ten Hag identifying him as his no1 midfield target.

Chelsea are also eager to sign the Netherlands international and believe the incentive of playing Champions League football this season can lure him to Stamford Bridge.

Aubameyang meanwhile has also emerged as a transfer target for the Blues, with Thomas Tuchel eager to add more firepower to his squad following the departures of Romelu Lukaku and Timo Werner.

Both players have expressed a preference to remain at Barcelona this season despite Premier League interest. Xavi however has suggested exits are still possible in the coming weeks.

‘I am counting on him. I’m really delighted with him, he can help us,’ Xavi said of Aubameyang, speaking at a press conference on Friday.

‘Those I am not counting on already know, they know won’t play. Between now and 31 August, different things can happen, but I like Auba, he can help us.’

On de Jong, Xavi added: ‘It is the same as Auba, he is important for me. He’s in the squad and we will use him. I don’t know what will happen between now and 31 August, but not just with Frenkie or with Auba, with almost everyone in the squad.’

United have relentlessly chased de Jong all summer, agreeing a fee with Barcelona in the process, but the midfielder’s preference is to remain at the Camp Nou.

United have now begun looking at alternative options in midfield, opening talks to sign Adrien Rabiot from Juventus with Sergej Milinkovic-Savic another target.

Chelsea co-owner Todd Boehly has spoken directly with de Jong in hope of luring him to the capital and while Barcelona are keen to cash in on one of their top earners, his desire to stay his holding up the move.

Barcelona meanwhile have been unable to register new signings, along with Ousmane Dembele, this summer as they are still in breach of La Liga’s squad cost limit.

The Catalan giants however are hopeful of registering Franck Kessie, Andreas Christensen, Raphinha and Robert Lewandowski ahead of their season opener against Rayo Vallecano after activating their fourth ‘financial lever’ on Friday.

The post Xavi sends warning to De Jong and Aubameyang to give boost to Man Utd & Chelsea first appeared on europesportsnews.com.