It was a historic day at Wimbledon on Sunday as the first-ever Sunday of the tournament that staged play as part of the two-week schedule, and the 100-year anniversary of Centre Court. Roger Federer returned for a special presentation and was reunited with Rafael Nadal, Novak Djokovic and Andy Murray.

The Championships also saw its longest match of the tournament between David Goffin and Frances Tiafoe, as well as a crazy final set match tiebreak between Jamie Murray and Venus Williams against Alicia Barnett and Johnny O’Mara. Here, Express Sport brings you all the best bits from Day Seven at Wimbledon.

Centre Court fans went wild as the top seed took his top off ahead of his fourth-round match against Tim Van Rijthoven before bursting out laughing at the response. The six-time champion at Wimbledon was forced to wait until 8pm to take to the court following the centenary celebrations earlier in the day, which pushed back Heather Watson’s match against Julie Niemeier before Jannik Sinner took three-and-a-half hours to beat Carlos Alcaraz. The crowd screamed and woo’d again at the end of the first set when Djokovic stripped down to his bare chest. This time, he was laser-focused and gave no reaction.

There is just one Brit left standing in the draw after four made it to the third round, with British No 1 Cam Norrie through to his maiden Grand Slam quarter-final. After Heather Watson made her maiden fourth-round at a Major she was unable to go one further with Niemeier beating her 6-2 6-4. And the German was apologetic after the match, telling the Centre Court crowd: “I just want to say sorry that I had to kick out a British player today.” 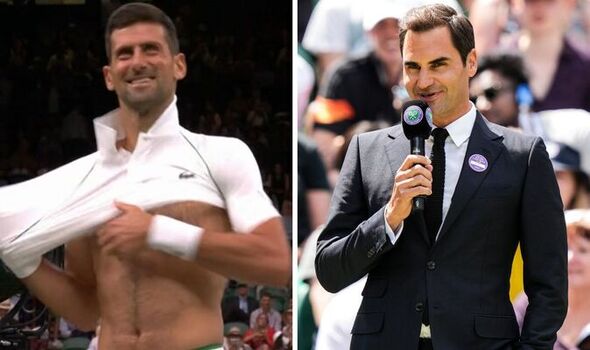 Roger Federer made a surprise appearance at the All England Club on Sunday to take part in the Centre Court presentation. The 40-year-old was spotted on the grounds before he was introduced as the eight-time champion alongside a glittering list of fellow former Wimbledon winners, including his Big Four rivals – Nadal, Djokovic and Murray. And the duo dubbed ‘Fedal’ were snapped having a chat in the clubhouse more than a year after the last tournament they both competed in.

Carlos Alcaraz faced fellow young gun and “friend” Jannik Sinner in what was a Centre Court debut for both men. A Wimbledon official explained to a nervous-looking Spaniard how he would walk out onto the court before addressing his opponent. After telling Sinner to just follow Alcaraz, he added: “Don’t trip him up.” Both men laughed and stepped onto Centre Court, where Sinner didn’t trip Alcaraz and instead defeated him in four sets.

It was Court 2 that witnessed a record-breaking match at this year’s edition of The Championships despite all the focus being on Centre. David Goffin defeated Frances Tiafoe in the longest match of the tournament so far, 7-6(3) 5-7 5-7 6-4 7-5 in four hours and 36 minutes. The crowd got a chance to be involved as the American shook hands with spectators in the front row when he broke with a stunning winner for 2-2 in the first set. And the epics kept coming as Jamie Murray and Venus Williams lost in a 18-16 match tiebreak to Alicia Barnett and Johnny O’Mara. 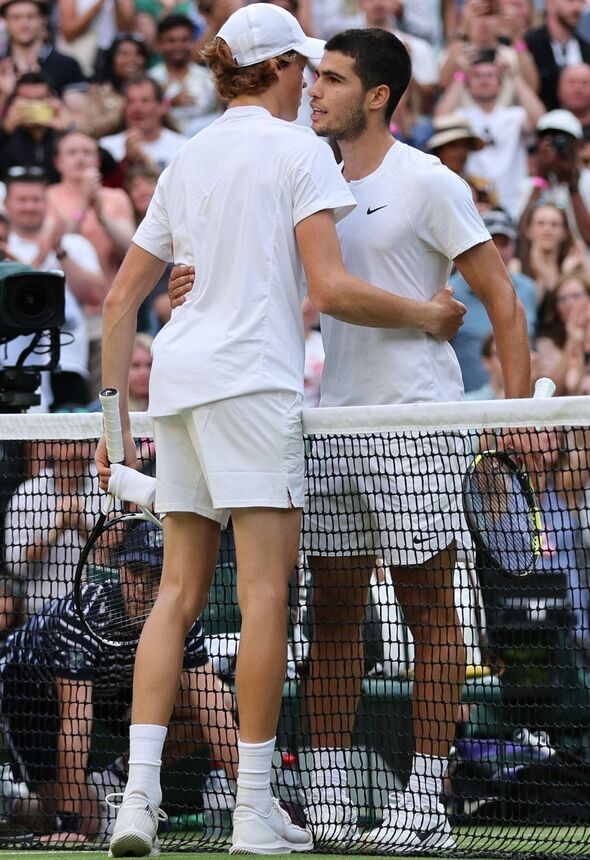 Sir Cliff Richard has been the talk of Wimbledon this week, turning up almost every day to enjoy the Centre Court matches. And he was part of the centenary presentation as he sang Summer Holiday before John McEnroe began to make an awkward joke about his former relationship with “Wimbledon queen” Sue Barker in the icon’s last year as BBC anchor for the tournament. “Sue, didn’t you have a thing with that guy,” he laughed as the 66-year-old stressed: “Stop, stop, stop. We’ll move on, thank you John” before later joking he would be relegated to Court 17 commentary for going off-script.