Manly are likely to dig their heels in by not releasing Martin Taupau from the rest of his contract to join rivals Parramatta – because he could line up against the Sea Eagles days later.

Taupau, 32, added to the Sea Eagles’ turbulent week when he requested an immediate exit to link with fellow top-eight contenders the Eels, who are due to play Manly at 4 Pines Park next Friday night.

According to sources familiar with the situation, the Sea Eagles are reluctant to grant Taupau his wish to find a new home with five weeks of the regular season left as they fight for a finals spot.

There would be benefits to a release for the Sea Eagles, who would save money on their salary cap if a rival club picks up Taupau’s tab for the rest of the contracting period until October 31. They could use the money to help front pay a player – or players – to alleviate stress on next year’s salary cap.

But the draw complicates matters as it pits Manly against Parramatta at Brookvale next week.

If the Sea Eagles are to be any chance – however slim – of sneaking into the finals, they would have to beat the Eels at home next week. Losing one of their most experienced players to a team they are chasing in the top-eight race would be hard to fathom. 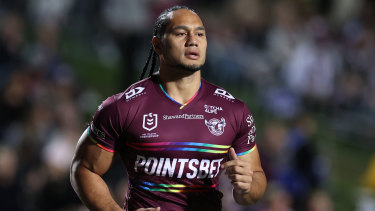 Martin Taupau has requested a release from the rest of his Manly contract.Credit:Getty

The clubs could discuss an agreement where the Sea Eagles release Taupau before the August 1 deadline, but stipulate he doesn’t play against them four days later. That would give him only four regular season games with the Eels and any potential finals.

Manly will welcome back seven players – Jason Saab, Tolu Koula, Toafofoa Sipley, Haumole Olakau’atu, Christian Tuipulotu, Josh Aloiai and Josh Schuster – for the clash against the Eels after they all missed Thursday night’s loss to the Roosters due to a boycott of the club’s inclusivity jersey.

Taupau is without a deal for next year and is on the hunt for a new home. The Eels might offer him the chance to play a 14th NRL season.

The Eels are hoping to bolster their bench rotation and view Taupau as a potentially solid addition to complement a power game built behind by State of Origin props Junior Paulo and Reagan Campbell-Gillard.

Wests Tigers winger David Nofoaluma has already flown to Melbourne to join the title-chasing Storm for the rest of the season, allowing the joint venture wiggle room in its salary cap next year. Nofoaluma will return to the Tigers in 2023.

Meanwhile, the saga of Australia’s selectors for the World Cup is over, with Laurie Daley and Darren Lockyer accepting nominations to return alongside coach Mal Meninga for the Kangaroos’ title defence.

Origin coaches Brad Fittler and Billy Slater turned down requests from the ARL Commission to fill the roles, which had previously been held by Daley and Lockyer.

The NSW Rugby League and Queensland Rugby League nominated Daley and Lockyer respectively to return to their positions, and the two league legends have agreed to the positions.

It means the pair will work with Meninga in finalising the Kangaroos’ World Cup squad, with ARLC chairman Peter V’landys to act as the chairman of selectors and break any potential selection deadlocks.

The post Why the Sea Eagles will dig their heels in on Taupau’s release request first appeared on europesportsnews.com.