Des Hasler is one of the few people at Manly to emerge with their reputation intact following the rainbow jersey fiasco, but he has been dealing with another big issue that could explode as a result of the split at the club.

Hasler has five games to save his career with the Sea Eagles, despite guiding them through the most trying of weeks. Under the terms of his contract, Manly have to finish in the top eight this year in order to trigger a new deal with the club.

It is a condition that Manly put into his contract, which was negotiated when Hasler was facing life in the coaching wilderness after his celebrated falling out with the Bulldogs in 2017. He had to agree to clauses that coaches in a stronger position would knock back.

There had been negotiations for months between former Manly chief executive Stephen Humphreys and Hasler’s agent, George Mimis, to restructure the deal. That all came to nothing when Humphreys made a sudden exit from the Sea Eagles in April.

Seven Sea Eagles players did not play in Thursday’s 20-10 loss to the Roosters after refusing to wear a jersey featuring rainbow colours that was designed to promote inclusivity. It would have taken a strong finish to the year to make the top eight, but the Roosters loss has left Manly 10th on the ladder and in danger of missing the finals.

Hasler has been left to coach with a cloud hanging over him, and, with new Manly boss Tony Mestrov starting on Monday, his future is sure to be a hot topic. 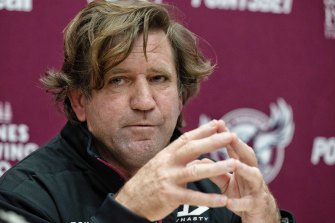 Des Hasler was widely praised for his response to the Manly jersey controversy.Credit:Nick Moir

Hasler’s situation also raises another interesting issue about the jersey boycott. If Manly don’t finish inside the top eight to trigger a renewal for Hasler, the coach may have a case against the club.

Manly’s management has admitted the decision to wear the controversial jumper was not communicated to the coach, and we have seen the fallout since.

If Hasler’s deal is not renewed due to their finishing position, the role the “inclusivity” jersey played in their demise could be something Mimis seizes on. The obvious solution is to ditch the clause and allow Hasler to coach without the doubt surrounding his future.

It is remarkable that even a fourth place finish last year didn’t assure Hasler would keep his job beyond this season.

Members of the Manly seven are standing strong and want it made clear assertions from club management that they are ready to backtrack on their decision and wear any kind of “rainbow” jersey in the future are well off the mark.

The players contacted management to tell them their position has not changed, that they will continue to refuse to wear such jumpers and that they are angry the club has made them look weak.

They have told the Sea Eagles they refuse to compromise their religious beliefs by wearing a rainbow jumper next year.

A few minutes after Nathan Cleary became the NRL’s latest headline in an amazing week, a representative of the group contacted me to let me know they will not be changing their minds.

“I can speak on behalf of all the players, the seven, plus another player who was asked to replace the players – the view of the group is united, the players will not be taking part in a pride exercise,” the representative, who did not want to be named, said.

Josh Aloiai, one of the seven, broke the players’ silence on social media on Friday night, saying: “No amount of public scrutiny or internal pressure will cause us to fold our stance, you can’t backflip on beliefs or turn them on and off.”

An intermediary provided me with a statement saying: “The players will not be told what to believe. Or wear something that is in contrast to their beliefs. Whatever religion or culture is important to people, the players have no issue with that. They won’t tell others how to believe or behave and want the same respect given to them.

“While consultation was important, the real issue relates to their religion. The players have been criticised for playing in a sports betting jumper at a beer field. The critics may not have read the Bible. There is nothing to say it’s not OK, just not in excess, but the same goes for food.

“The players also want it known they are not homophobic. They are not telling people what to do. But they don’t want to be told what they need to represent when they don’t believe it.

“They won’t have words or thoughts put in their mouth.”

Manly’s rainbow jersey was proposed by their apparel company as part of a deal with the club worth close to $6 million over six years. At first, Manly were not keen to take up the idea – not because they feared creating controversy but because they already felt they had enough different jumpers to wear in 2022.

It is understood Dynasty Sport was keen on the other clubs they supply – the Sharks, Cowboys and Titans – also wearing a rainbow jumper. In the end, Manly went with the idea as they were negotiating a new apparel deal at the time. They were not backed into a corner, but it was obviously a sweetener in the deal, because apparel companies and clubs make more money when there are different jumpers to sell.

The Sea Eagles jersey was never meant to be a demonstration of gay pride, rather it was supposed to be all about including everyone. And everyone, including the football department, knew about the idea. Only the players and the coach were left in the dark.

The email chain can be traced back to February, which supports the idea there was widespread knowledge of the jumper plan.

A group of Roosters players made a statement on Thursday night, and it was inspired by Sam Verrills.

If you looked closely, some players wore rainbow laces in the Brookvale clash to signify their support for inclusivity. 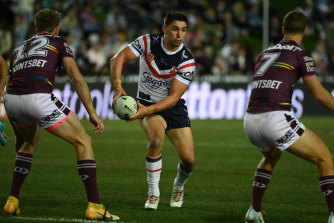 It is something that would have pleased the man who established the “Rainbow Round of Sport” in Australia in 2016, Jaimie Fuller. In that case, a number of sports, including rugby league, adopted the idea of wearing rainbow shoelaces. It was taken from an idea in the English Premier League.

Fuller, who was chief executive of international company Skins from 1998 to 2019, has provided another interesting insight into the broader issue that has been the topic of the week.

“What a lot of people don’t really know about is there’s an interesting cultural position with a number of communities and islander cultures, primarily with the Samoans the Tongans, and also the Tahitians and Hawaiians, and it’s very normal in those societies, if you’ve got multiple sons, for the youngest son to be brought up as a girl,” he said.

“I’ll give you an example. The Tuilagi brothers, Samoan brothers, five Tuilagi brothers played rugby for Samoa. The sixth brother played rugby for England. The seventh brother was brought up as a girl [reports about which sibling are conflicting]. So it’s very normal in that culture. It’s depicted as a third gender as opposed to a transgender. So you have a culture that accepts this, but I can’t have a rainbow on my shirt because it denotes LGBT.”

It is difficult to understand the argument of those comparing Israel Folau’s stance to that of the Manly players. The seven Sea Eagles were not outwardly condemning anyone from the gay community to the fires of hell.

I understand their stance has a serious impact, but it is not as outwardly aggressive as that taken by Folau, who stated on social media in 2019 that homosexuals, among others, were destined for hell unless they repented and turned away from their “evil ways”. Rugby Australia subsequently terminated Folau’s multimillion-dollar contract.

Folau’s wife, Maria, on Thursday attacked ARL Commission chairman Peter V’landys for excluding her husband but accepting the Manly players who refused to wear the jumper. 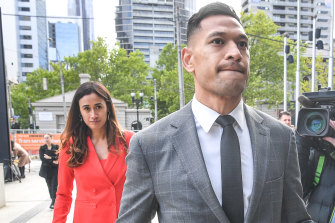 On his second day as ARLC chairman, V’landys made a strong statement when asked about Folau, saying: “The game is inclusive. The comments of Israel are not inclusive.”

The situations are entirely different. The Manly players did not create the jersey issue and knew nothing about it until a few days before the match, while Folau generated his own controversy.

Having covered a large portion of Ian Roberts’ career, it’s hard not to sit back and admire the person he is today. Those close to him know just how tough this week has been for the only “out” rugby league star.

I remember the conversations I would have with him when he was thinking about coming out and the difficulties he faced. He has worn hate from small-minded people for years and stood tall for those without the strength or platform to do so.

He knows deep down that the Manly seven have shone a light on what he has been talking about for so long, more than he could have in the past week.

Let us hope in years to come he is given the acknowledgment and support he thoroughly deserves.

The post Why rainbow jersey could cost Hasler his job first appeared on europesportsnews.com.