New Western Force coach Simon Cron has set his sights on turning his side into one of the buffest teams in Super Rugby Pacific, and says simply making the finals won’t be considered good enough.

Cron has been tasked with turning the new-look squad into a powerhouse after taking over as coach from Tim Sampson. 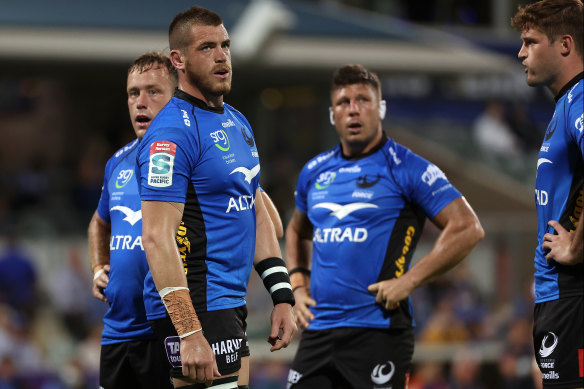 Simon Cron is setting out to add size and strength to the Western Force squad.Credit:Getty Images

Pre-season training doesn’t officially start until October 1, but Cron is keen to get the ball rolling early.

One of his initial aims is to add significant size and strength to his squad to help transform the Force into a beefed-up unit.

“One of the things we need to do is dominate the contact zone,” Cron said.

“Rugby is a pretty simple game. If you win the gain line, it goes a long way to winning the game.

“So right now we’ve increased the focus on weights and the mass.

“We’re looking at nutrition, and our strength and conditioning coaches are working on world-class weights programs.

“It’s about putting on lean muscle mass, not fat.”

Super Rugby Pacific is a 12-team competition, with eight of those clubs qualifying for finals.

The Force only narrowly missed out last season despite posting a woeful 4-10 record.

Billionaire owner Andrew Forrest wants to turn the Force into one of the best rugby clubs in the world, and Cron is embracing the challenge.

It’s why merely making the finals in 2023 won’t be considered a success.

“I would not set the bar at finals, because it’s too low a bar,” Cron said.

There has been plenty of player movement at the Force since the end of last season.

Veterans Jeremy Thrush, Richard Kahui, and Greg Holmes all retired, while Fergus Lee-Warner, Kyle Godwin, Santiago Medrano, and Jake McIntyre are among the players who have left the club.

The Force’s acquisition of former Reds playmaker Hamish Stewart on a two-year deal was crucial after five-eighth Reesjan Pasitoa suffered a serious knee injury that could rule him out for the entire 2023 season.

Cron, a former NSW Waratahs assistant who was coaching Japanese club Toyota Verblitz when he was poached by the Force, wants to introduce an exciting style of play next season.

“The type of rugby will be high skill, high tempo type game, which I think suits the squad we have,” he said.

“For me, ball beats man. We’ve got to make sure all our players can catch, pass, run, tap, trigger – all those things.”