West Coast coach Adam Simpson says the club will investigate why Elliot Yeo keeps getting struck down by leg injuries after the star midfielder suffered a calf strain last week.

Yeo was due to return from a hamstring injury in Sunday’s clash with Gold Coast at Metricon Stadium, but those plans were binned when he injured his calf at training. 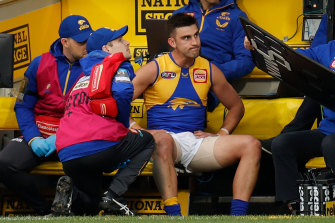 Elliot Yeo looks on from the bench after leaving the field with an injury during the Eagles’ round 16 match against Richmond.Credit:AFL Photos

Simpson also confirmed forward Josh Kennedy would be rested for the trip to the Gold Coast.

Yeo missed the first four rounds this year after tearing his calf in a pre-season game.

He suffered a heavy concussion in his second game back and was then hit by COVID-19.

Yeo returned in round 14, but lasted just three games before injuring his hamstring.

The run of setbacks continues a frustrating run for Yeo, whose 2020 and 2021 campaigns were heavily affected by osteitis pubis.

With just four rounds remaining this year, Yeo may not be able to return in time from his calf strain.

“The continuity he’s had this year has been next to nothing. We’ve got to get that right,” Simpson said.

“He’s doing everything he can and then just at the last hurdle [he’s] not getting that clean two or three weeks.

“Once you get over that hump you’re OK, but he had a disrupted pre-season with it and then it’s just carried all year really and the bottom half of his body has let him down.

“It’s obviously frustrating for everyone. We’ll investigate and do everything we possibly can to try and get it right so he has a really good pre-season next year.”

Forward Willie Rioli will return after missing two games following the death of his father, while Simpson is optimistic ruckman Nic Naitanui will return from a knee injury.

The future of defender Shannon Hurn remains a hot talking point, with Simpson to sit down with the 34-year-old at the end of the season.

Hurn has been one of West Coast’s best players this year, but his position is far from secure given the club will be embarking on a big list rebuild.

“We’re waiting for the time when the game might go past him, but that hasn’t been the case this year,” Simpson said.

“He’s probably in our top three or four in our best and fairest.”

“We’ll talk to him at the end of the year. We’ve got to see where the rest of the list is at and what we need to do.

“But we’re not going to completely rip the heart out of the club either.”