When it comes to a premiership template, Collingwood do not fit the typical mould.

Of 15 important statistical measures provided by Champion Data on the home-and-away season just finished, the Magpies’ highest placing was seventh – for points from intercepts difference – highlighting their defensive pressure and ability to counter-attack.

In terms of points for and against, they are ninth and eighth respectively, which does embody the typical premiership blueprint. Melbourne were third and first respectively last year; Richmond were fifth and second respectively in 2020. Of the past 10 premiers, no team was ranked outside the top five for points conceded. 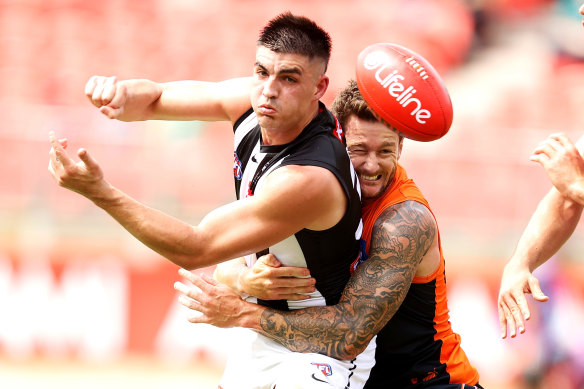 Brayden Maynard says the Magpies have the belief they can rebound from any tough situation.Credit:Getty Images

The Magpies are ranked 17th for clearance differential and 17th for contested possession differential, again not numbers generally associated with a premier. Remember, the Blues won the latter by a whopping 54 on Sunday (a record margin in defeat).

However, amid a myriad of numbers available, here’s the one which should be so precious heading into an unexpected finals campaign. The Magpies have won a season-high seven matches when trailing at three quarter-time – three more than next-best Geelong and Sydney, two clubs also firmly in the premiership hunt.

Their latest escape act came against the Blues, having trailed by four goals at the final break. This reinforced the heart and conviction the Magpies have – a never-say-die mantra that can be partially explained in data, but one that speaks more to the soul of the players, and their belief in an attacking game plan and a vision set by coach Craig McRae, who surely will be the coach of the year.

“Our group manage the moments as good as I have ever seen it. We practice that, and we review it,” McRae said.

Then there was this from the players.

“It’s probably the best I have seen in a group since I started footy,” Brayden Maynard, the Magpies’ swingman, said of the team’s belief. 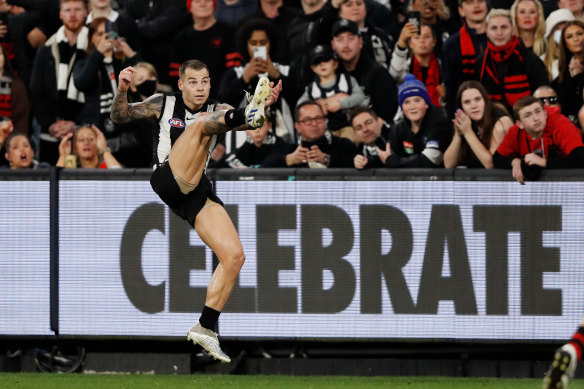 Jamie Elliott produced a magical moment with his goal after the siren against Essendon. The Magpies train specifically for moments like that.Credit:AFL Photos

“The will to win, being 20 points down, we don’t want to be there, but if we do get caught in that position, we know how to get it done.”

Added skipper Scott Pendlebury: “I feel we are pretty present in those moments, we know what we have to do.”

That comes from detailed training sessions where the Magpies split into two teams – one winning, one losing – and practice how to handle the final minutes of a close game. This is as much a mental test as it is physical, with the Magpies also using data to help their cause.

We watched in almost disbelief when the Magpies went coast to coast against Essendon, leading to Jamie Elliott’s mark and post-siren winning goal. Against the Demons, the Magpies, having rallied from 23 points down, were able to wind down the clock through clever defensive play, and forced stoppages. Against the Blues, it was run and overlap.

“There were a few moving parts to it,” McRae said of Sunday’s final-minute tactics.

Alastair Clarkson has likened McRae to four-time Golden State Warriors championship coach Steve Kerr for how both men have overcome adversity in their lives, this tenacity filtering through to their players.

Admittedly, there is an element of luck. The Blues had a 20-11 advantage in inside 50s in a mesmerising final term on Sunday, but managed only six points because of poor kicking and terrible decisions which will haunt Michael Voss and his men through the summer.

“The reality is, we have managed this as good as I have ever seen a team do it. Funnily enough, we have been in that position so many times – no other team is having to do it every week like we are,” McRae told Fox Footy.

A deeper dive into the ladder shows that while the Magpies finished fourth and have the double chance, they have a 3-5 record against their fellow top-eight finalists, with a percentage better than only the Brisbane Lions and Western Bulldogs. However, overall since the bye, they are 8-1, bettered only by the unbeaten Cats – their opponent in a qualifying final on Saturday week.

Many Magpie supporters, still in disbelief from the club’s record rise from 17th last season, say they are just happy to have made the finals, and any win from here is a bonus. But McRae, referring to how his Lions mentor Leigh Matthews once put it when they were part of three flags together, doesn’t see it that way.

As McRae points out, the Magpies are only three wins from what would be the club’s 16th – and potentially most unlikely – premiership.

“It’s a lot closer than it was 10 weeks ago. We will have the ability to reflect a little bit in the coming days and we’ll reset ourselves for what’s to come,” he said.

The post ‘We know how to get it done’: Why Collingwood should believe first appeared on europesportsnews.com.