1. That was poor from Australia in Argentina

It clearly could be described as more than one step backward, although the extenuating circumstances of Michael Hooper’s departure likely played a role in Australia’s lack of urgency in their 48-17 loss to Argentina on Sunday.

Contents
1. That was poor from Australia in Argentina2. Wallabies’ back three deserve particular scrutiny3. Springboks’ unpredictable threat comes from outstanding Lukhanyo Am4. The Wallabies will keep the door open for Cooper5. The All Blacks put NZ Rugby on notice – Don’t sack Ian FosterRugby Championship Team of the Week – round twoMost Viewed in SportFrom our partners

The Wallabies had to go deep into their reserves after Hooper left, and they looked like a side coming down from that high.

Poor running lines, a stack of missed first-up tackles, passive scrummaging, offloading responsibility to players in worse positions and a lack of ball security in perfect conditions: they looked like a side that was craving the familiar comforts of home.

That’s an issue for Dave Rennie and co, but they may feel the circumstances leading up to the performance are unlikely to be repeated for the rest of The Rugby Championship.

Tom Wright has fared better than expected in the fullback role, but the relative inexperience of the Brumbies outside back and Jordan Petaia was exposed in San Juan. 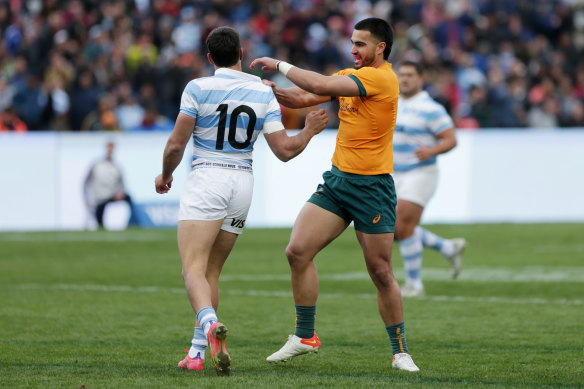 Michael Cheika’s recall of Juan Imhoff, 34, was a masterstroke as he and opposite Emiliano Boffelli asked all the questions in the air (and ground) against the Wallabies. Rennie will know that the Springboks’ aerial game is their go-to weapon – but the All Blacks counterattacked off it to score the game’s crucial try in Johannesburg.

The Wallabies have a good record against South Africa on Australian soil, and they will be primed for the Springboks’ traditional strengths at the scrum and maul. However, the Boks have a ‘point of difference’ player in Lukhanyo Am, who must be the best centre in world rugby. 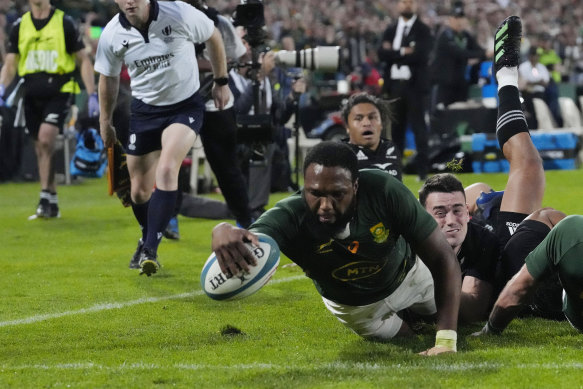 Lukhanyo Am was a handful for the All Blacks but couldn’t stop the Springboks going down by 12 points in Johannesburg.Credit:AP

So much of the Springboks’ attack against the All Blacks came from the No.13, who reads the game beautifully and will pop up either side of the ruck depending on where he sees space.

4. The Wallabies will keep the door open for Cooper

It was unrealistic to expect James O’Connor to be anything but a bit clunky at No 10, but you can bet that the Wallabies will track Quade Cooper’s rehabilitation extremely closely. The Wallabies don’t look like the same side without the late-career Cooper, in terms of their organisation or ability to shape defences.

It is extraordinary that the Wallabies’ Rugby World Cup hopes rest, to a degree, in the form of the 34-year-old but his renaissance has been remarkable.

It’s hard to remember a bunch of players sending such an emphatic message to their bosses about the coach. The All Blacks scored two superb tries in the 35-23 win over South Africa and rediscovered their edge up front.

It was a quite brilliant response to the pressure Foster has been under, and the Herald understands a number of them had to be talked out of standing behind the coach during his post-Test press conference.

With emotions running high, these are no circumstances under which Scott Robertson could take over: he may not even want to.

Rugby Championship Team of the Week – round two

Watch every match of The Rugby Championship on the Home of Rugby. All matches streaming ad-free, live and on demand on Stan Sport.