Unsuspecting shoppers were left stunned as they were treated to a world-class display at Westfield London – from former Olympic bronze medallist gymnast, Nile Wilson.

The ex-Team GB star, who wowed the country in the men's horizontal bar display at the 2016 Summer Olympics in Rio de Janeiro, turned the shopping centre into his own personal gym on Thursday, to the delight of onlookers.

Nile and his team of gymnasts took to all areas of the mall to showcase jaw-dropping backflips, air tricks, and even handstands and group tumbles down the escalators.

But the team weren't just there to show off their own talents – and encouraged Westfield shoppers to try new stunts they would never have dreamed of doing, to mark Try Something New Day.

Putting the public's skills to the test, Nile assisted shoppers with joining in, helping them to land backflips and try out their own gymnastic tricks for the very first time. 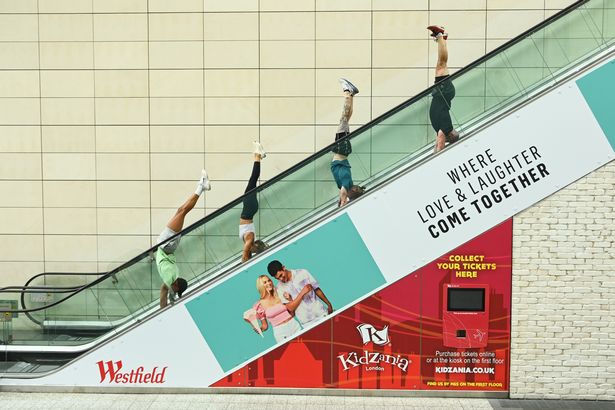 After going head over heels for Nile and his team, one shopper named Alex said: “I honestly only came in quickly to pick up a couple of bits, and then next thing I find myself having a one-to-one session with Nile Wilson! Very impressed that he got me to land a backflip, but definitely won’t be doing it again on my own!”

And another visitor, Julie, who was spending the day at Westfield with her family, added: “It was so much fun seeing Nile and his talented friends have fun and perform their tricks and stunts around the centre. The kids loved it!”

Katie Wyle, General Manager at Westfield London, said: “Westfield London is a destination where visitors will experience something new and often unexpected on every visit.

“Yesterday’s surprise performance from Nile and his team kick-started a summer of entertainment and surprise and delight moments for our visitors. We’re delighted they chose Westfield London to show off their skills and get everyone involved.”

Nile’s takeover comes just in time to celebrate the 10 year anniversary of the London Olympics, which kicked off on July 27 2012, and also marks the Commonwealth Games which began in Birmingham on Thursday.