Ivan Cleary has dismissed the latest accusation of “arrogance” against his side as Penrith bid to equal the quickest minor premiership win in rugby league history.

Thursday’s clash against the Storm comes as the latest in a brewing rivalry between the 2020 grand finalists, following Melbourne chairman Matt Tripp’s attack on the “arrogance of that club and their perceived status in the game at the moment.”

Cleary gave the comments short shrift on Wednesday as Penrith put aside the drama around five-eighth Jaeman Salmon to focus on securing the club’s fourth minor premiership and second during Cleary’s tenure.

Should the Panthers down Melbourne and the second-placed Cowboys fall to the resurgent Roosters at the SCG on Saturday, Penrith would secure the J.J. Giltinan Shield with three rounds remaining.

According to Champion Data, it would be a feat matched only once in almost 50 years, by eventual 2000 premiers Brisbane, and one never bettered. 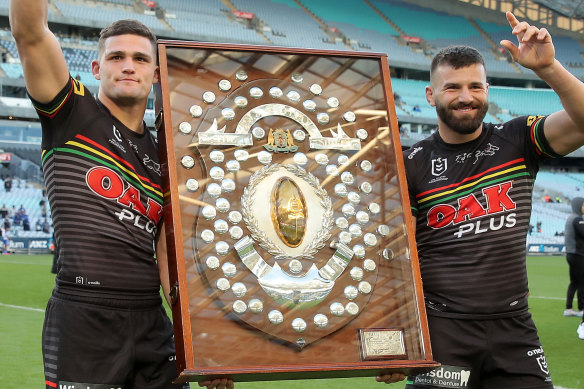 Between them, the Storm and Panthers have won the past four minor premierships, with Penrith deputy chairman Greg Alexander turning the rivalry nuclear last week when he claimed Melbourne is responsible for the dangerous tackling techniques that have surfaced in the past 20 years.

Tripp’s branding of the Panthers as “arrogant” came as a result and follows similar accusations from Canberra in the past 18 months.

“I’m not here to judge anyone else. But I know that Brandy [Alexander] is an outstanding commentator and a decorated figure in the game. If anyone’s able to have an opinion it’s Brandy.

“Most of his opinions are spot on. But that was his opinion in a completely different role. So, I don’t think it’s fair for everyone else at our club to be labelled what we were, but these things happen sometimes.

“I don’t know why people say it. All I can say is I don’t believe it’s true. The consistency that we’ve shown in the last three years. I don’t think you can do that if you’re disrespectful or arrogant.

“We’re proud of our club and our boys. We’re probably not perfect, but I like to think we’re doing a decent job.”

Storm coach Craig Bellamy had nothing but praise for the Panthers as “the dominant side of the last few years”.

Both sides will be without representative halves with Nathan Cleary (suspension), Jarome Luai (knee) and Jahrome Hughes (shoulder) unavailable.

Salmon starts in the halves again for Penrith after Ricky Stuart was fined and suspended for his unprecedented attack on the young playmaker last weekend.

While Cleary conceded Salmon was “a bit rattled on the night” he said the 23-year-old had shown few ill effects at training this week.

The Panthers consider the matter finalised now the NRL has sanctioned Stuart but would support any legal action taken by Salmon and his family should they pursue it.