Tyson Fury has demanded that his long time rival Derek Chisora signs a contract to fight for the third time, amid talks that the Gypsy King could take on Oleksandr Usyk. Fury successfully defended his WBC heavyweight title in April after defeating Dillian Whyte at Wembley Stadium in April.

Following his victory the undisputed heavyweight champion of the world revealed that he would be hanging up his boxing gloves, and retiring from the sport. Talking on Piers Morgan Uncensored after his win he said: “​​This is the truth, the gospel truth, nothing but the truth, I’m done.

“You know every good dog has his day and like the Roman leader said, there will always be someone else to fight. The fans will always want more, they are always baying for more blood. But at the end of the day I don’t have anything more to give. I’ve given everything I’ve got.”

Now though it seems the Gypsy King is ready to go again, after calling out old foe Chisora who he has already beaten twice before. Talking on his Instagram story, Fury said: “This one goes out to Derek the s***house Chisora. You are running Derek from the trilogy.

JUST IN: Anthony Joshua told secret Oleksandr Usyk weakness that ‘nobody talks about’ before fight 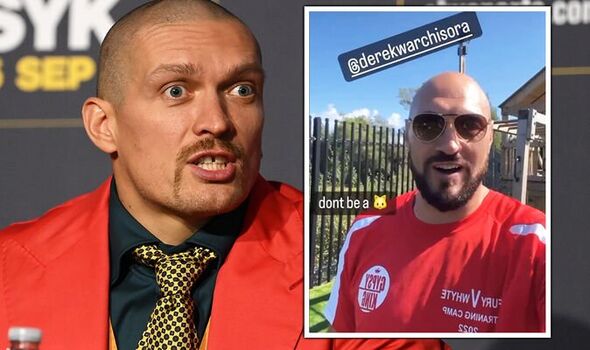 “Call yourself war but you should call yourself chicken, because you are running from a trilogy. Running from a career-high pay day, get the f*****g contract signed. Stop being a s***house.”

The next big fight in the heavyweight division sees Usyk take on Anthony Joshua for a second time. The Ukrainian will be defending his unified WBA, IBF, WBO and IBO heavyweight titles that he won from Joshua following their first bout last September.

And if Usyk is successful a second time around, he could well face off with Fury in an undisputed title bout according to the Gypsy King’s promoter Bob Arum. 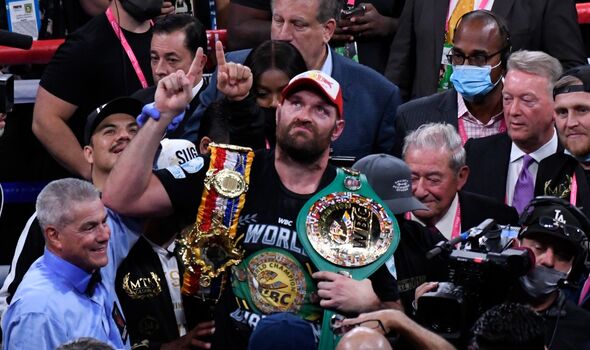 When asked about the potential of a Fury comeback, Arum told Barbershop Conversations: “I will let you know when Joshua’s fight with Usyk happens in a few weeks. I’m hoping that Usyk wins because I have talked with his people and I think they would be anxious to fight Tyson Fury.

“And I am hoping to do that fight in December or early next year. I just think Usyk is a better talent than Joshua and he is certainly quicker than him and I would like Usyk in the undisputed fight. But could it go the other way, yes possibly.”