An up-and-coming KO artist with SIX children, a 6ft 3in Californian who self-taught by kicking the family couch and a dazzling bantamweight with his own podcast… the American rising stars aiming for UFC glory

It is a mark of just how far MMA has come that only one current champion in any of the male divisions was born in the USA.

Contents
An up-and-coming KO artist with SIX children, a 6ft 3in Californian who self-taught by kicking the family couch and a dazzling bantamweight with his own podcast… the American rising stars aiming for UFC glory‘Suga’ Sean O’MalleyJalin ‘The Tarantula’ Turner Jamahal Hill Erin ‘Cold Blooded’ BlanchfieldTerrance McKinney Share this article

The UFC have always strived to spread their tentacles worldwide and now fighters from Europe, Africa and Oceania are having their time in the sun.

Where the stars and stripes once had a stranglehold, the grip has now loosened with only Aljamain Sterling, Julianna Pena and Carla Esparza flying the flag at the top of their respective weight classes. 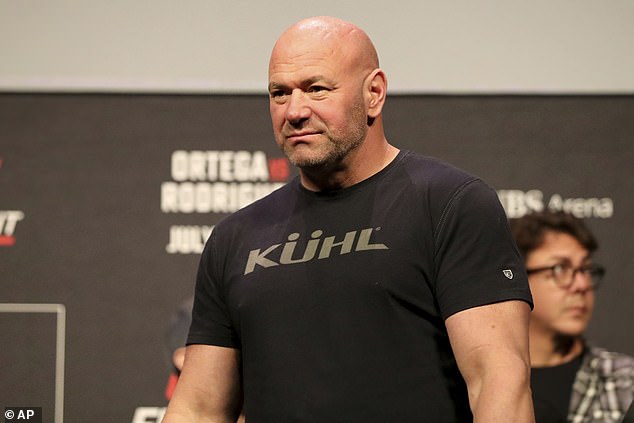 Is this a problem for the UFC? The American market remains the dominant one and most major events are of course held in Las Vegas.

And yet the talent pool in the US appears to be dwindling with such elite level opposition to be found around in every continent.

Ultimately, Dana White and Co want the best of both worlds. American stars and a global reach with expanding markets across the globe.

So who are the American upstarts looking to turn the tide and re-establish the USA as the dominant force in MMA?

‘Suga Sean’ is the most established up-and-comer on this list.

He ticks just about every box as a marketable, exciting talent who can talk the talk and back it up in the octagon.

O’Malley has cultivated a kind of modern day Willy Wonka image, just with a few more spinning kicks and KOs than Charlie and the Chocolate Factory.

Born in Montana and fighting out of Arizona, the 27-year-old is hugely popular among younger fans, is a big gamer and is certain of his ascent to the top. 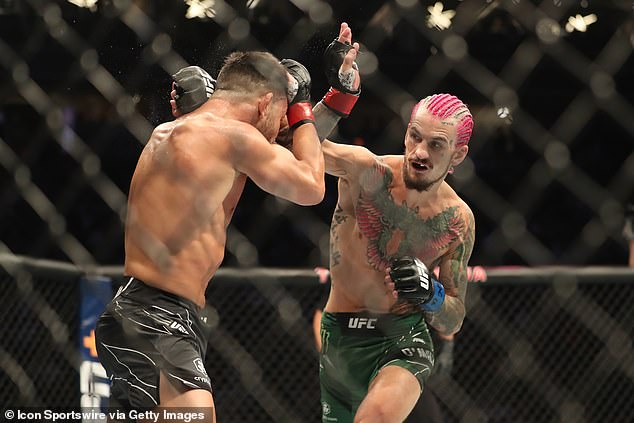 O’Malley was awarded a UFC contract after impressing on Dana White’s Contender Series and has lost just once in eight appearances since.

He is touted to take on former bantamweight champion Petr Yan in his next encounter in what would be by far his toughest opponent.

O’Malley’s recent fight with Pedro Munhoz was stopped due to an accidental eye-poke forcing his opponent to pull-out but ‘Suga Sean’ is moving onto big things.

He understands just how important self-promotion can be and hosts his own podcast The Timbo Sugarshow along with hosting regular streams on Twitch.

Other interesting side notes about O’Malley are that he is an advocate for legalized marijuana and has spoken about being in an open relationship with his girlfriend. 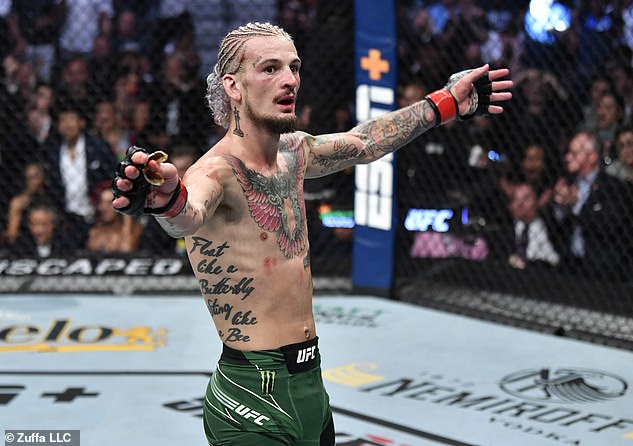 ‘The Tarantula’ suffered with numerous injuries in high school, preventing him from competing in most sports.

He became inspired to train in MMA after watching fights on TV but as he struggled to afford equipment, Turner used his family sofa as a makeshift punching bag.

The 6f 3in Californian previously explained: ‘In whoever’s backyard, we sparred in boxing, kickboxing. When I was home, I’d look up videos and train kicks. My couch was my punching bag. 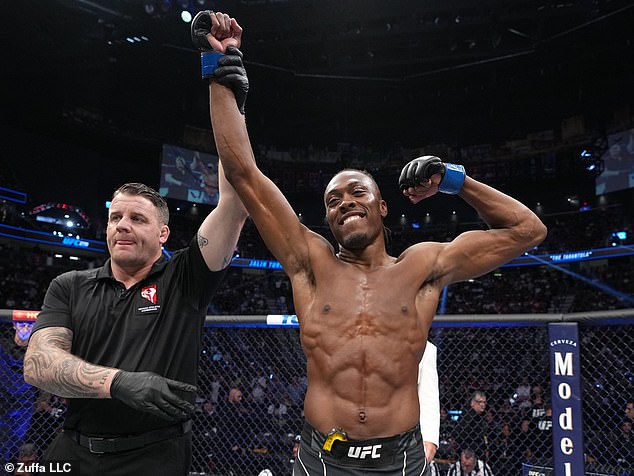 As a youngster, Turner was arachnophobic but decided to tackle his fear of spiders head on.

He started to collect tarantulas and at one point in time, owned more than 200 of them. These days he’s down to five and his opponents have frequently found themselves tangled in his web.

Turner lost two of his first three fights in the UFC but has since been on a tear, winning his last five.

The 27-year-old lightweight has plenty to offer and is dangerous everywhere, with nine knockout wins and four submission on his record.

In one of the UFC’s toughest divisions, the American will be looking to make his mark over the next year. 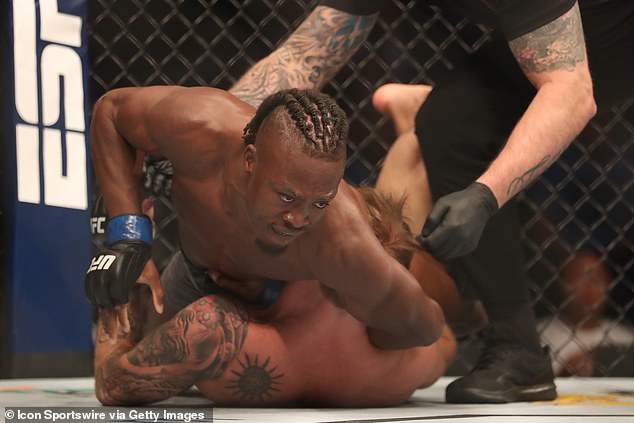 Some fighters in the UFC just have that weird power – the kind than makes you look twice when an innocuous looking shot does extreme damage.

Jamahal Hill possesses it in abundance. The Chicago-born light-heavyweight has just one loss on his record, a savage defeat by Paul Craig during which he had his arm snapped.

It was a rare blemish for Hill, who has since bounced back with first-round KO wins over Jimmy Crute and Johnny Walker. 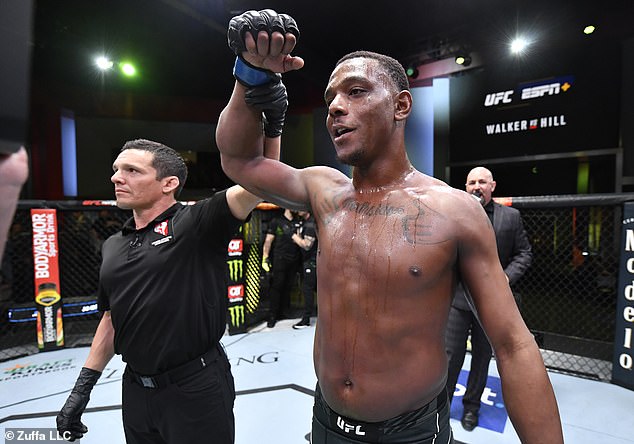 Hill, 31, is already a father of six ranging from two to 14 so has his hands full away from the octagon.

‘I tell other people all the time – I’ll be out and everybody’s like, ‘Oh, UFC,’ all this and that, and my kids are just like, ‘I want something to drink; can you get me some juice or something?’ They bring me back to reality real quick,’ he told the UFC.

And he has title aspirations, adding: ‘It’s always been that, and it’s all been a slow, step by step process.

‘I think about it, but I don’t put too much in it. I just need to keep working and I’m gonna get there.’

Next up for Hill is a chest-thumping clash with Thiago Santos on August 6. 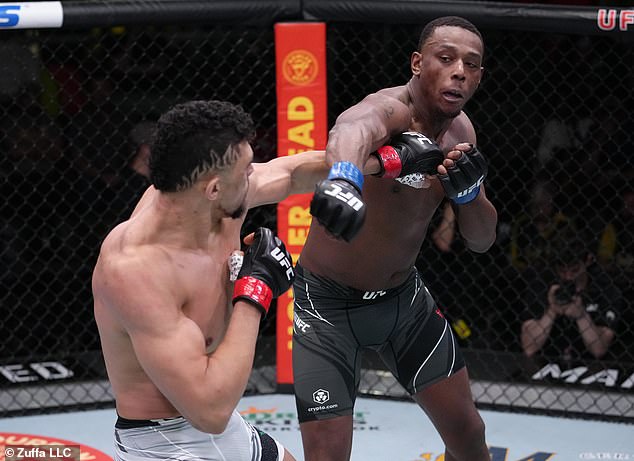 Blanchfield is still an infant in MMA terms aged 23 but has the world at her feet.

Having already amassed a record of nine wins and one defeat, the 5ft 4in flyweight has to be seen as one for the future.

The New Jersey native has a black belt in jiu-jitsu and remains unbeaten in three UFC fights so far.

As if all that wasn’t impressive enough, Blanchfield has aspirations of becoming a commentator one day. 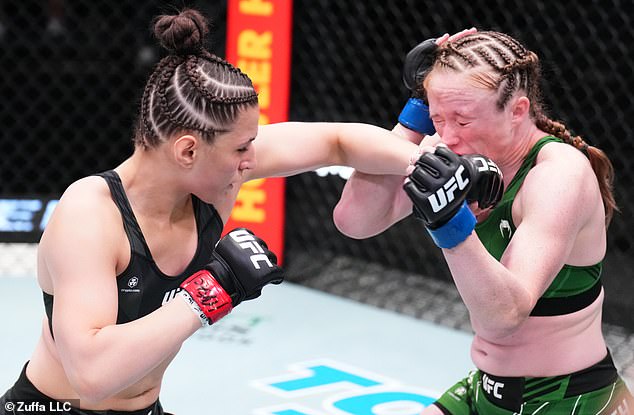 She is studying television and digital media at University in conjunction with her training.

Her nickname, ‘Cold Blooded’ came from her father. ‘Whenever I fight I always have a very plain face, like a poker face, and I just go in there and do what I have to do,’ Blanchfield told MMA Fighting.

‘So he always thought that it was very cold-blooded and it kind of matched the last name, like, Erin ‘Cold Blooded’ Blanchfield, and it stuck.’

A submission win last month via guillotine has kept the momentum rolling and at her current rate of trajectory, Blanchfield will be mixing it with the division’s best in no time. 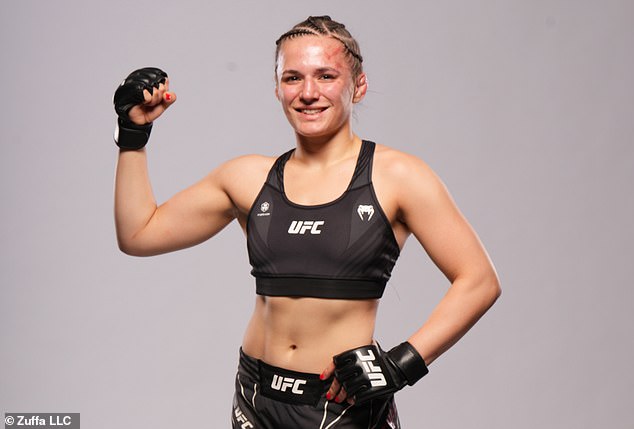 McKinney’s origin story is another fascinating one.

He has rededicated himself to MMA after a traumatic near-death experience back in 2015 that he has since detailed.

The 27-year-old, just 20 at the time, was found cutting his own neck with glass after becoming extremely intoxicated by consuming LSD, mushrooms and alcohol.

The police found himself covered in blood and his heart stopped twice in the ambulance en route to the hospital.

When speaking about the episode later, he said: ‘I was so embarrassed, to be honest, I was really disappointed in myself. 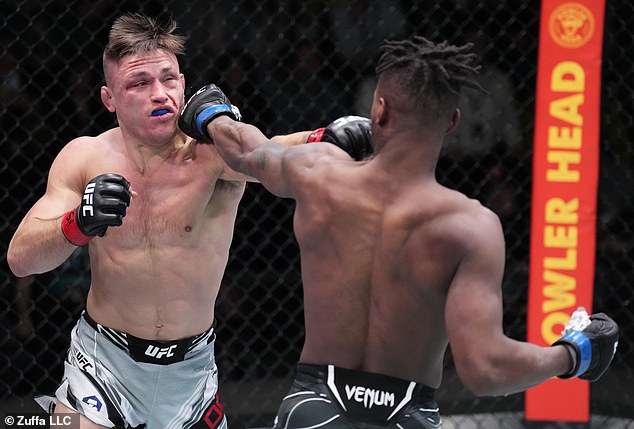 ‘Just seeing my mom’s face in tears. She could have lost me forever, and I’m her first born. That was a huge game changer for me.

‘Seeing my family members crying and sad. Just seeing that inspired me to make a change. I tried to be around them every day, and I still feel they’re hurt. That pushes me to be the man I am today.’

The Washington-born lightweight hasn’t had it all his own way so far but the 27-year-old’s talents in the octagon are undeniable.

A short-notice defeat by Drew Dober in March was a setback but McKinney has time on his side.

He was an outstanding collegiate wrestler but packs a real punch too. McKinney has five wins by KO and seven by submission on his record, showing how lethal a finisher he can be. Keep your eyes peeled for T. Wrecks has he continues his progress in the big show. 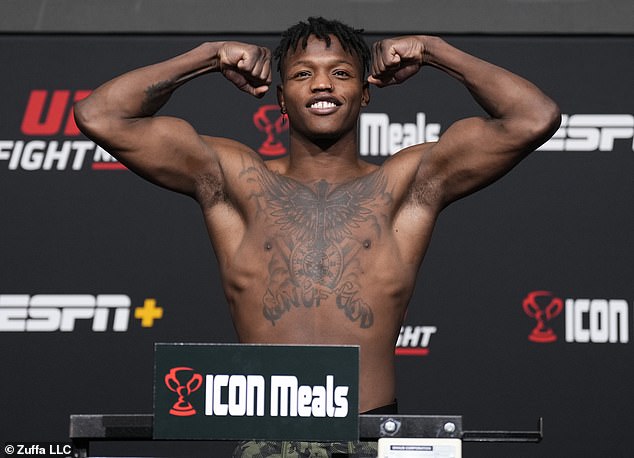 American lightweight McKinney (pictured) suffered a near death experience in 2015