Britain's first double Olympic swimming champion in 113 years returned home to a surprise tonight – a street party in his honour.

Most of the 70 people who had packed Tom Dean’s back garden to go mad at his gold-winning exploits were waiting and a few more besides.

Fittingly it was organised by Tom’s loving mum Jacquie Hughes, who had guided him to the historic triumph.

It was Jacquie who made sure he was ready before dawn for training throughout his teenage years.

Tom told how it was mum he was thinking of when he fought back tears on the podium after his first gold in the 200m freestyle.

Which of the British medals are you most pleased with? Let us know in the comment section

The 21-year-old from Maidenhead, Berks, said: “I heard the anthem being played. I looked across and it hit me because my mum is always there.

“The emotions came as she was not there, so it was not just a joyous occasion, but tough. My family could not be there to share it with me.”

He joked how he had watched the video of the celebrations in his back garden “a million times” in the Olympic village.

Meanwhile Olympic champion Matt Richards was ready to celebrate with his girlfriend – and lots of cake. Matt’s parents Amanda and Simon had invested £1,000 in an outdoor pool during lockdown.

The 18-year-old from Worcester tethered himself to the garage with a rope and swam for two hours in the morning and two in the afternoon every day.

He sold the pool after 10 weeks and got £600 back – “all things considered not a bad investment”, he said.

Get all the latest Olympic news straight to your inbox. Sign up to one of the Mirror's newsletters

Matt will be reunited with girlfriend and world champion swimmer Emily Large, 20, of Newcastle, who spoke of her pride in his achievements. “He works so incredibly hard in and out of the pool,” she said. Of his golden leg in the 4x200m relay, he said: “It was a big new pool, easier to see the opposition.”

Fellow swimmer Duncan Scott, 24, who made history with four gongs, was welcomed home by parents Nigel Scott and Joy Macnaughton.

Nigel said the extraordinary Olympic tale has started “back in Troon” in south Ayrshire, when they decided a young Duncan and his sister should learn to swim.

Today, for all the loved ones left behind, it was a chance to celebrate their heroes at last.

Kye Whyte who won a Silver posed for a photo with his parents Nigel at Heathrow.

Gold medal winning BMX rider Bethany Shriever was greeted with a huge hug from her boyfriend Brynley Savage at the airport.

Meanwhile equestrians Carl Hester and Charlotte Dujardin wrapped themselves in the union flag to mark their medal wins.

The return of our most successful ever Olympic swimmers came as Team GB continued to make history.

The eventing team won the title for the first time in 49 years today.

There was also a sliver for Emily Campbell, our first ever women’s weightlifting medal.

Meanwhile gymnast Max Whitlock told he has missed his daughter Willow, two, after winning his third title on the pommel horse.

Max, 28, who won two Golds in Rio, cannot wait to get back home to see Willow and wife Leah.

He said: “It has been a bit surreal, a crazy journey, I felt the pressure massively this time.

"I was nervous and I am really, really pleased that I pulled it off, and I cannot wait to get home.

"Willow understands a little bit and has seen me on TV.

"She goes to a gymnastics club in South Essex so gets the gist and knows that I was going to do gymnastics.

“Leah is planning a party. We will have a good get together with all the people who got me here, my friends family and Scott, my coach. 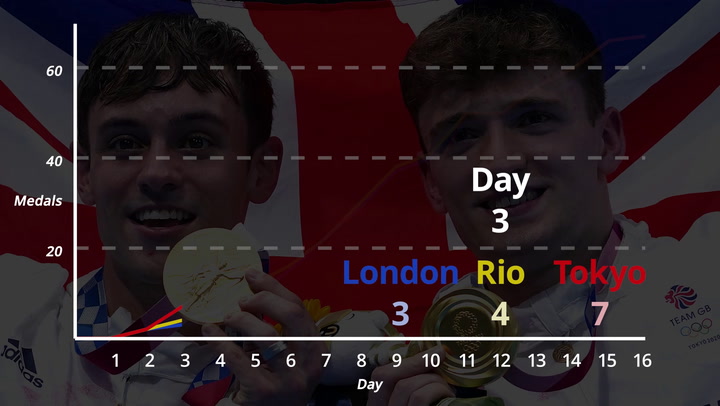 “I’ve been here for a month and I noticed how much more she is talking, she is growing up all the time.”

Other heroes were still to return tonight. The parents of gold medal-winning triathlete Jess Learmonth were waiting for her to fly in.

Andrew and Beverley covered their home in Boroughbridge, North Yorks, with gold bunting and balloons alongside a Union flag.

Andrew said they watched the nail-biting relay alone at home in the early hours of Saturday.

“We weren’t jumping up and down on the sofa, opening bottles of champagne or anything. We just sat there thinking ‘wow, Jessica’s got an Olympic medal and it’s a gold one’.”

Andrew said when his daughter was interviewed with teammates Brownlee, Georgia Taylor-Brown and Alex Yee “you could see the camaraderie in Team GB. A lot ask us, is it really like that? Yes, it is”.

The post Team GB Olympic hero Tom Dean and his secret street party as he returns to UK first appeared on europesportsnews.com.