Thrill-seeking sports fans need look no further for their next adrenaline rush – as the tank biathlon is proving to be quite the spectacle over in Russia.

The military event is currently being held as part of the International Army Games, an annual competition organised by the Russian Ministry of Defence and attended by the nation's allies such as China and India.

It pits tank crews against each in a battle of shooting, driving and overcoming obstacles. And as you can imagine, the competition is fierce, as shown by Iran's cynical crash into Zimbabwe earlier this week.

READ MORE: Russian military organise and compete in 'War Olympics' with 30 other countries

The Iranian team clearly didn't face going gun-to-gun with their opponents, as the driver swerved across the Zimbabweans' path and pushed them off the track.

It was a bad day all round for the Africans. As shown in a hilarious Twitter thread by user @ConflictsW, their shooting was horrendously inaccurate, missing every target, and they had a technical error in the race which led to a Russian technician having to fix their communications. 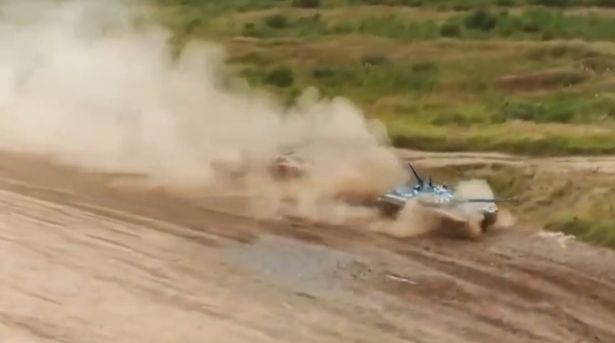 The only saving grace for the Zimbabwe team is that they weren't the only ones to struggle, as the Armenian crew were disqualified for smashing into the side of the Laos tank.

And it got even worse for Sudan, who somehow got lost and ended up driving through fields rather than the track. If you're sold on the sport then hang fire from buying tickets to next year's event for a minute, because you might change your mind.

South Ossetia suffered a major technical malfunction which had their turret spinning wildly out of control and towards the crowds watching on. Fortunately, no one was harmed in the making of this biathlon.

Russia, of course, have won gold every year since the inaugural event in 2015 and are on course to do so again this year, with the finals wrapping up this week before the closing ceremony of the International Army Games on Saturday (August 27).

The post ‘Tank biathlon’ gets feisty as Iran crash into Zimbabwe in crazy event with guns first appeared on europesportsnews.com.