Harry Kane has admitted fellow Tottenham forward Son Heung-min is “frustrated” despite Spurs’ scintillating start to the season. The South Korean striker, who shared the Premier League Golden Boot with Liverpool’s Mohamed Salah last term, is yet to find the net in any of his side’s opening four matches of this campaign.

Tottenham continued their impressive unbeaten start to the new season with a resilient 2-0 triumph over newly-promoted Nottingham Forest on Sunday. Despite seeing a penalty saved from Forest stopper Dean Henderson, Kane was the Spurs hero once again, hitting a brace to move Antonio Conte’s men up to third in the Premier League table, two points adrift of early pacesetters Arsenal.

But while there has been plenty of reason to cheer in the white half of north London this season, Tottenham striker Son has not been in his usual buoyant mood having failed to get off the mark on the goalscoring front this term. According to Kane, his fellow forward is “frustrated” having drawn a fourth blank in a row, but the Spurs skipper insisted Son remains an “important player” who will soon rediscover his touch in front of goal.

Speaking to Sky Sports after his side’s 2-0 success over Forest, Kane said: “If you want to be a top team you need to compete in every position. That is what we have created with the squad we have now. 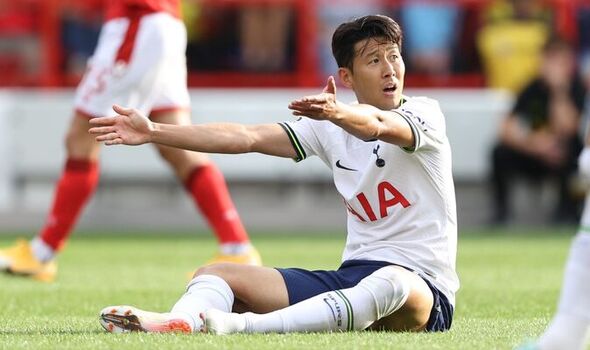 “Richarlison, whenever he’s had the opportunity, he’s played really well. He’s biting at the bit to play. We have a lot of games coming up. I know Sonny might be frustrated with not scoring yet but he’s an important player for us.

“If we are going to achieve anything this year we need Sonny to keep doing what he is doing. He’ll pop up with goals, no doubt. But when players are not quite at it then you need players off the bench to make an impact and Richarlison has been doing that.” 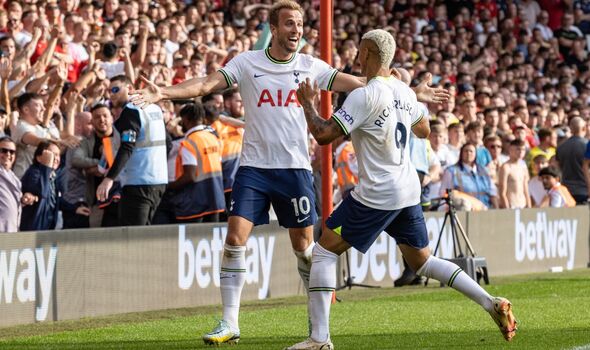 Son struck a stunning 23 goals in 35 Premier League appearances last season, while also claiming nine assists to boot. Having been an indispensable element of Tottenham’s attack alongside Kane last term, the 30-year-old finds himself up against increased competition this time around.

Spurs shelled out £60million for Richarlison from Everton earlier in the summer and the Brazilian is already beginning to assert himself in his new side. The 25-year-old set up Kane’s second with a sumptuous outside-of-the-boot assist at the City Ground on Sunday having replaced Son with 74 minutes on the clock.