Embattled Essendon coach Ben Rutten arrived at the club’s Tullamarine headquarters on Tuesday morning with his future under a cloud after the club instigated an external review on Monday and installed media executive David Barham as president.

The board upheaval, which followed the resignation of president Paul Brasher, opened the way for the Bombers to pursue four-time premiership coach Alastair Clarkson who is also being pursued by North Melbourne and the Giants. 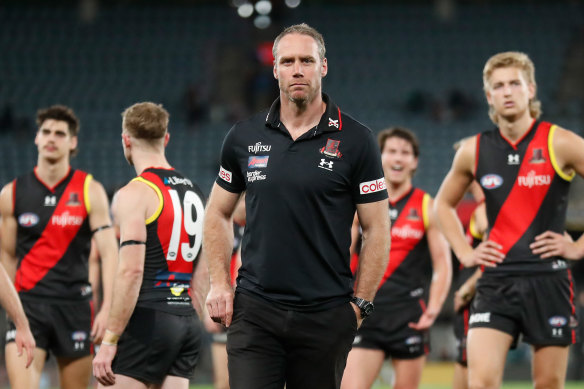 Rutten, who has a year remaining on his contract, has not been dismissed from the position however the board moves means his job is not guaranteed as it was when Brasher was president.

He is unlikely to coach the club in 2023 as his position became untenable with the board moves and the refusal of the club to guarantee his position.

Bombers skipper Dyson Heppell backed the coach but sources have indicated Rutten does not enjoy the full support of players to continue as coach.

The Bombers have not yet met with Clarkson who was favoured to join North Melbourne as coach before Essendon’s last-minute moves with AFL media reporting the Bombers also met premiership player and Giants’ assistant Dean Solomon about a role at the club.

The post Rutten arrives at Bombers HQ as decision on his future looms first appeared on europesportsnews.com.