Jeremiah Nanai is in rarefied try-scoring air, has a billing as one of the NRL’s most coveted signatures and rookie of the year honours all on a very promising horizon, all before his 20th birthday.

With two tries in North Queensland’s win over the Dragons on Sunday, Nanai’s four-point feast has now yielded 16 for the season in as many games.

Nanai, of course, still has as many as five games left to play in a regular season where he has pushed ahead of Penrith’s Taylan May as the game’s best rookie in recent months.

Considering the scramble for his signature in March, in which the Dolphins, Wests Tigers and Newcastle were among Nanai’s suitors when he still had less than 10 career games to his name, North Queensland are well aware of the stoush looming for his services.

At the time Nanai signed a one-year Cowboys extension despite being offered multi-year deals, reportedly worth up to $600,000 a season elsewhere.

Having ridden his impressive form to three Origin outings in Queensland’s series win and Kangaroos contention for the World Cup, Nanai is now playing well beyond that price tag.

Again the Cowboys are more than aware market forces could take hold if Nanai is a free agent come November 1, though the youngster’s thoughts on his future should come as music to the club’s ears.

“Hopefully, fingers crossed, I’d love to stay in Townsville for the rest of my life,” said Nanai, who turns 20 next February. “The club’s been good to me and I’d like to get another contract with them. We’ll see how we go. 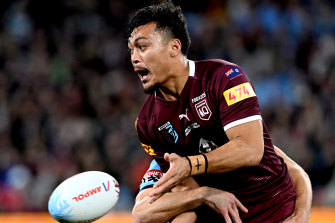 Nanai’s Origin rise has him heralded as a potential World Cup bolter for the Kangaroos.Credit:Getty

“The contract talks at the start of the year, I wanted to leave it to my manager and he looked after me.

“It didn’t really get in my head, I wanted to wait and we agreed to wait those first few weeks of the season to see how I went.

“After that I just wanted to get it signed and stay put. It was only one more year just to take that pressure off, just to get it away and then come back with a bit more footy under my belt.”

Nanai was “humbled” to have Dolphins coach Wayne Bennett eyeing him as a potential signing, but also has a calvary of Cowboys greats in Johnathan Thurston, Jason Taumalolo and club staffer Gavin Cooper to lend an ear whenever needed.

Nanai’s try-scoring exploits are being matched by his efforts without the ball, according to Cowboys head of football Micheal Luck.

“For a 19-year-old he does things that guys in the mid-to-back end of their careers are only just perfecting,” Luck said.

“Especially the way he defends an edge, there’s real maturity in his decision makings, you rarely see him overcommit.

“Origin was great for him. After spending a five-week period with some really experienced and high-quality players, [there has been] an attitude change since he came back. It’s been great to see.”

‘I threw up three times’: English winger on pain of ‘exploded testicle’

The post Rookie forward poised to cash in after rocketing up record try-scoring list first appeared on europesportsnews.com.