The Australian women’s hockey team enjoyed a photobomb fit for royalty when Queen Elizabeth II sensationally jumped in behind a player’s selfie at the 2014 Commonwealth Games in Glasgow.

Two years after she starred in the London 2012 opening ceremony opposite Daniel Craig playing James Bond, the Queen went viral again after she photobombed an Australian hockey player’s selfie. The ‘Hockeyroos’ were warming down after their 4-0 win over Malaysia when the monarch arrived early for the contest between Wales and England.

The Australian players were ecstatic over the surprise appearance and immediately began firing off selfies, hoping to get a shot involving the Queen as she walked by. Jayde Taylor got the snap with teammate Brooke Peris, and took to Twitter to celebrate: “Ahhh the Queen photo-bombed our selfie!!”

To celebrate the beginning of the 2022 Commonwealth Games in Birmingham, Taylor once again jumped on social media to post the photo. In her caption, she wrote: “Bringing this one back for a special weekend! Happy Platinum Jubilee Queen Lizzy”

The Queen and the Duke of Edinburgh watched Australia defeat Malaysia 4-0 on the first day of action in Glasgow, as Jodie Kenny and Kellie White scored while Georgie Parker bagged two. The Australia team played the match wearing black armbands in memory of the victims of the MH17 disaster, and defender Anna Flanagan said: “It has really affected our country, and we wanted to show our love and support.”

The Queen had arrived in Glasgow as events began eight years ago after the opening ceremony. Following Australia’s win, the monarch made her way over to the team and spoke to a number of players.

What is your favourite ever moment at the Commonwealth Games? Let us know in the comments section below 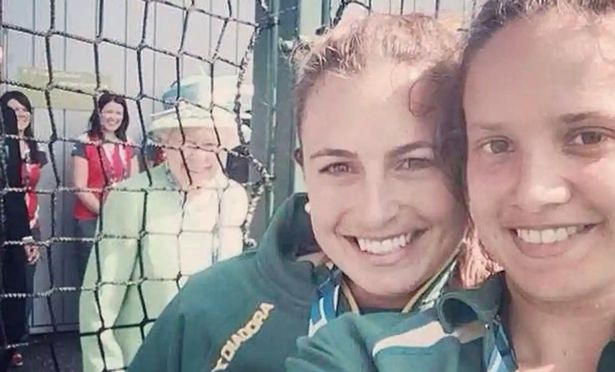 “We were warming down on the second pitch after our game and the queen came out to meet Donny [team captain Madonna Blyth],” Taylor said after the surprise encounter. “She asked us a bit about the pitch, how we were going and told us to enjoy our time here. She was lovely, really, really lovely.”

The Perth-born star admitted the selfie photobomb was premeditated, adding: “Brooke [Peris] and I planned it so that when she came out the door she would be behind us. And then she came out and smiled at the camera.

The image has gone down as one of the most amusing images of Queen Elizabeth in Commonwealth Games history. She was photographed back in 1982 in Brisbane holding a sports program that had a beer on the back cover, creating the illusion she was enjoying a beverage while taking in the action Down Under.