At this level of football loose lips have a bad habit of sinking ships. On a night when Rangers stunned the Phillips Stadium to earn their place in the group stage of the Champions League PSV central defender Andre Ramalho learned that the hard way.

Wheeled out pre-match press duties the Brazilian made a bold statement. The Dutch league runners-up, he claimed, belonged in the Champions League. ‘The club deserves it and we deserve it too,’ he added.

After 60 minutes Rangers took his words and rammed them down his throat. Taking possession of a short pass from keeper Walter Benitez in his own area the 30-year-old failed to sense Malik Tillman’s advancing presence. 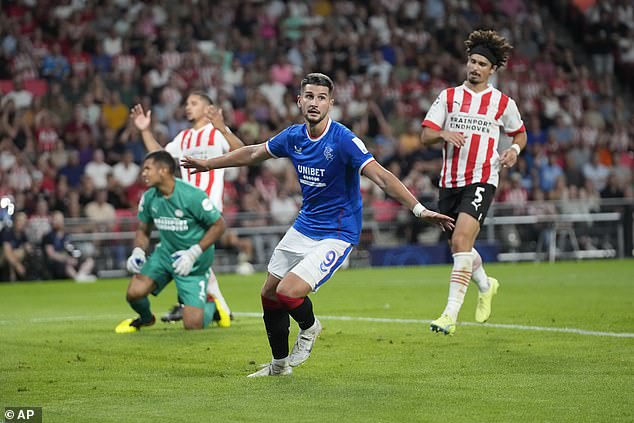 The on-loan Bayern Munich attacker dispossessed Ramalho, took his time and spotted the unmarked figure of Antonio Colak six yards from goal. Twelve months ago the Croatian scored the two goals for Malmo which ended Rangers hopes of reaching the group stage. This time his strike secured a first appearance in the group stages of the Champions League for 12 years.

No one can say victory was undeserved. After a 2-2 draw in the first leg the Europa League finalists required their first away win since a night of heroism in Dortmund in March. On a night when John Lundstram, Jon McLaughlin, Glenn Kamara and Malik Tillmand excelled there were no failures.

As wild celebrations broke out on the PSV pitch at time up you’d have paid good money for the thoughts of Alfredo Morelos. Axed for a lack of professionalism, the onus fell once more on £1.8million summer signing Colak. His fifth goal in Rangers colours, this one paid his summer transfer fee back with bells on.

Rangers now join Celtic in the draw for the group stages, both teams mixing it with Europe’s elite for the first time since 2008. Ruud van Nistelrooy’s first defeat as PSV boss this was another one of those nights when the Ibrox side defied the odds and an imperfect preparation. 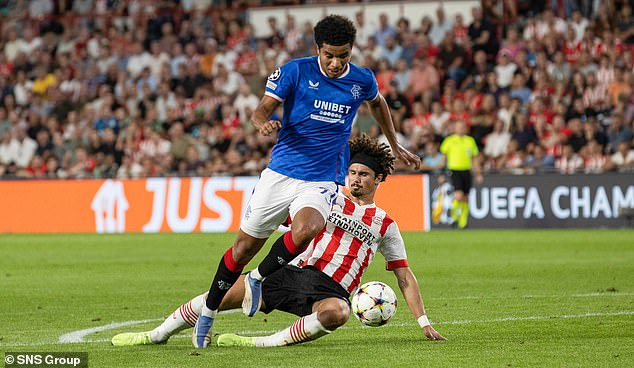 On top of Morelos-Gate the pre-match fireworks of the PSV fans delayed the team’s arrival at the ground by 20 minutes. Describing the scenes as some of the worst he had witnessed as a player or a manager Giovanni van Bronckhurst had the last laugh. Their fourth European trek to Eindhoven since 1978 the Scottish Cup holders have yet to lose a game.

After a nervous start Rangers had a fine 15 minute spell in the first half when they looked, once more, like the team who graced a European final in Seville three months ago. A team capable to winning the game

After 26 minutes they wasted the first outstanding chance of the game. A fine sweeping move saw Malik Tillman take up space on the left of the area to cut the ball back into the path of John Lundstram.

The midfielder had time and space to drill a fizzing shot into the side-netting and Giovanni van Bronckhurst held his head in his hands. The Rangers boss knew how big a chance it was.

In Glasgow the first leg swung to and fro like a pendulum. Just when you thought one team had the other up against the wall by the throat the momentum changed in an instant. So it was here. 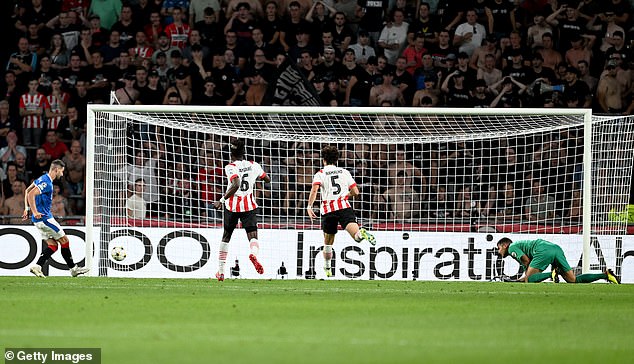 PSV will reflect on the 15 minutes before half-time as a period of wasted dominance. They blew some excellent chances.

It took 32 minutes for the home team to win their first corner and given the two goals they scored in Glasgow from that precise scenario Rangers were entitled to heave a sigh of relief when keeper Jon McLaughlin punched the ball high into the Eindhoven sky.

Any hope that Rangers might have fixed their issues in that department proved short-lived. From the next PSV corner Cody Gakpo shelled a ball into the area and an unmarked Ibrahim Sangare headed a great opportunity over the bar. Had he missed it Erick Gutierrez was standing behind him to have a go instead. It almost felt as if Rangers had learned nothing at all and the home fans could sense it, finding their voice once more.

They’d have grown a whole lot louder still had their team taken one or both of the excellent opportunities they carved before half-time. The first saw Jodan Teze swing a curling cross into the danger area from the touchline. Luuk de Jong got the run on Connor Goldson and met the ball flush. Straight at the body of McLaughlin, the keeper’s instincts served him well. 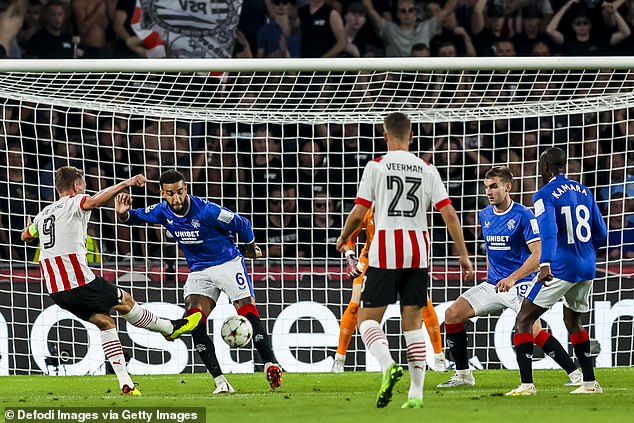 By the time the half-time whistle arrived Rangers were breathing hard, praying for respite. A £38million target for Manchester United Gakpo blew a wonderful chance to open the scoring wen he ghosted past a couple of challenges. Had he hit the target from 14 yards it was a goal. Instead he mishit a poor effort high and wide and the home fans howled in exasperation.

Half-time brought some welcome good news for Rangers. PSV captain and talisman de Jong, so nearly the scorer of the opening goal in those frantic minutes of the first half, limped from the fray with an ice pack on his knee. Replacing him was former PSG attacker Xavi Simons, yet something had gone from PSV’s armoury. The loss seemed to sap their belief while Rangers grew in confidence,

How close the visitors came to scoring a quite brilliant opening goal ten minutes after the restrart. When Tom Lawrence scored the second goal in the first leg it owed everything to the butter fingers of PSV keeper Benitez. When the summer signing cracked a curling effort against the junction of upright and crossbar after skipping round three or four chances it was a piece of stunning individual play.

PSV were rattled, their supporters growing progressively more edgy. Guilty of shooting themselves in the foot in Glasgow so it was here when Rangers sensationally took the lead on the hour. 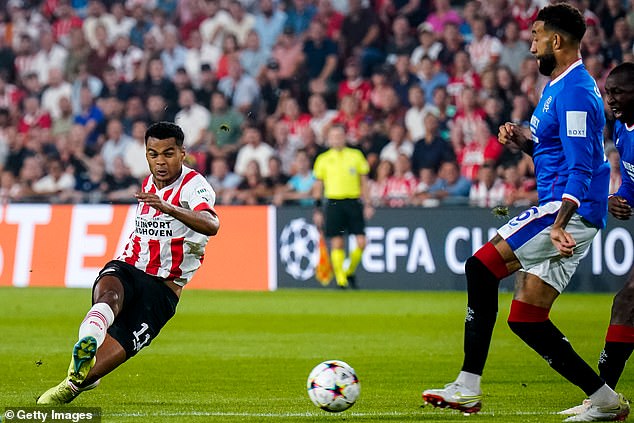 The first booking of the game, Ramalho’s awful dithering on the ball summed up the Brazilian’s night. Dispossessed by Tillman before Colak rolled a simple chance into the net he was hooked from the field in ignominy as part of a double substitution.

PSV were all over the place now. Tillman could have put the game out of sight when he smashed a low shot from 18 yards towards the bottom corner. Benitez scrambled across his line to save, but the home side looked increasingly at sea.

For a player covered by Erik Ten Haag Cody Gakpo was a disappointment over the two games. An explosive talent he was finally presented with a clear chance by the through ball of Simons it needed a huge save from McLaughlin to keep Rangers ahead.

As the board went up for four minutes of added time PSV carved one last chance. Armando Obispo scored the equaliser in Glasgow; slashing Gakpo’s cut-back wildly over the bar he couldn’t do it this time. Rangers were in the Champions League.