English cyclist Matt Walls took to social media to declare he is ‘pretty banged up’ but OK after he was involved in a horrific crash at the Lee Valley VeloPark. Walls needed medical attention after a pile-up saw him fly into the crowd, causing multiple injuries in the second heat of the men’s 15km scratch race at the Commonwealth Games on Sunday.

Walls surged to fame as he became Olympic champion in Tokyo last summer as he claimed the gold medal in the omnium, but he came crashing back down to earth – quite literally – on Sunday. On day three of track cycling at the Commonwealth Games in Birmingham, the 24-year-old appeared to come off worst in a crash and pile-up that was horrific to watch.

Walls was one of multiple riders to receive medical attention as fellow Brit Matt Bostock was also hurt. Those on the scene put a screen up around Walls while giving treatment which alerted people to the severity of the incident, while several members of the audience were also attended to.

Walls’ crash saw one crowd member ‘wheeled off covered in blood’ while witnesses said those in the front row were largely unsighted for the crash due to the gradient of the banking. Terrifying fan footage showcased how worrying the incident truly was, with the initial crash sending a number of riders airborne while Walls barrelled into the crowd at high speed. 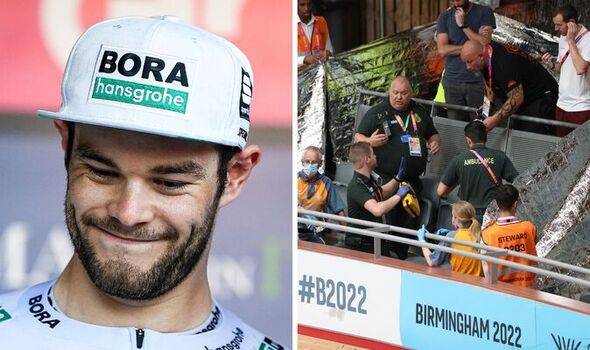 The Englishman was carried out of the arena on a stretcher around 40 minutes after the initial crash. Due to the severity of the crash, TV cameras immediately cut away and no replays were shown.

Walls, who was awarded an MBE earlier this year, took to Twitter to comment on his condition. He wrote: “Thank you everyone for the messages and support! 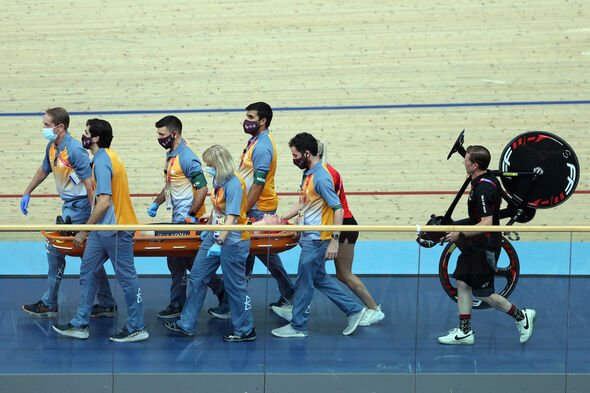 “I’ve somehow come away with no serious injures just a few stitches and pretty banged up. I really hope everyone else involved is ok including the spectators that may have been injured.”

With one sprint race left to run, the session was abandoned after the second heavy crash involving English riders in a matter of days. On Saturday, Joe Truman was briefly knocked unconscious after a high-speed collision before he was taken away in a wheelchair.