AFL ruckman Paddy Ryder has announced his retirement, pulling the pin on his stellar career with St Kilda, Essendon and Port Adelaide.

The 34-year-old told his Saints teammates on Saturday that his career, which included seven seasons with the Bombers, was ending. 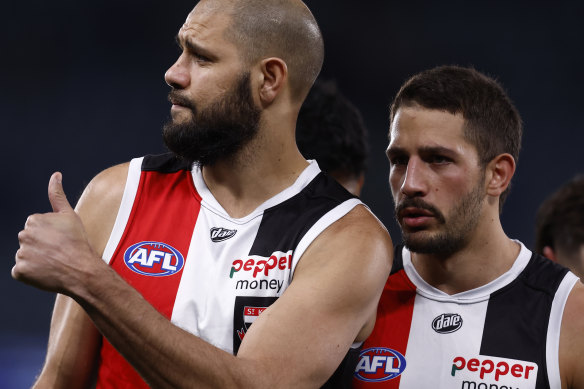 He has played 281 matches across 16 seasons.

“It’s been a really tough decision to come to, but I know it’s the right one,” Ryder told the club’s website.

“I’ve loved the role it’s enabled me to play in the community and the platform it’s given me to help educate people about Indigenous culture.

“Playing in games like the Dreamtime at the ’G, and this year running out with six of my brother boys against Hawthorn – they’re the moments I’ll remember forever.

“I want to thank all my current and former teammates, coaches and staff from the Bombers, Power and the Saints, particularly Kevin Sheedy, Matthew Knights, Mark Thompson, James Hird, Ken Hinkley and Brett Ratten. Thank you for giving me the opportunity to do my favourite thing week in week out.”