Melbourne premiership midfielder Clayton Oliver and high-flying Western Bulldogs forward Aaron Naughton have bolstered their sides ahead of their clash on Saturday night.

Oliver missed one game after having thumb surgery but has proven his fitness this week, joining Harrison Petty in Melbourne’s team with Adam Tomlinson (omitted), Luke Dunstan (medical sub), and Toby Bedford (omitted) left out. 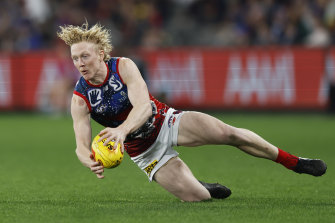 Clayton Oliver is back for the Demons.Credit:AFL Photos

Naughton was forced out due to COVID-19 last week, but he has made a quick return with Jordan Sweet (omitted) and Luke Cleary (medical sub) not named in the Bulldogs’ side.

Collingwood midfielder Taylor Adams is on track to make his return after missing a week with concussion, joining Isaac Quaynor and Tyler Brown in their club’s extended squad to face Essendon on Sunday.

The Magpies were assessing Adams this week after his concussion, while Quaynor and Brown were named on the extended interchange bench.

Alec Waterman, James Stewart, and Massimo D’Ambrosio have joined the extended bench for the Bombers.

The Brisbane Lions have brought in some star power with Daniel Rich, Dayne Zorko, Jarrod Berry, Marcus Adams and Oscar McInerney all returning to the team to face Gold Coast on Saturday.

Carlton have named Lachie Fogarty, Lochie O’Brien, Mitch McGovern, Paddy Dow and Will Setterfield in their squad to face GWS Giants on Sunday, while George Hewett (injured) and Will Hayes go out of the side.

St Kilda coach Brett Ratten has warned a number of senior players are on their “last chance” ahead of a clash with West Coast Eagles on Sunday.

With just one win from their past six outings, the Saints have tumbled out of the top eight and face a season-shaping clash at Optus Stadium.

Two-time best and fairest winner Seb Ross (COVID-19) is expected to play and Clark looks likely to join him.

Veteran midfielder Dan Hannebery will need to play at least one more game in the VFL before being considered for selection.

“If they stay in the team, they’ll be lucky and they’ll get a chance to respond, and if they don’t stay in the team they’ll have to work damn hard to get back in,” Ratten said on Thursday.

Fremantle’s leading goal-kicker Rory Lobb is out of the side for the clash with Richmond at Marvel Stadium on Friday night.

Lobb did not recover from a shoulder injury in time to fly to Melbourne with the Dockers on Thursday. The 29-year-old has become a key part of the forward line as both a goal-kicker and a mobile marking target.

Small forward Liam Henry and defender Alex Pearce have come into the Dockers’ side, while Ivan Soldo is in for Richmond and Jake Aarts and Liam Gibcus were omitted.

Hawthorn will happily have veteran forward Jack Gunston back into the side after missing the past two weeks following the death of his father, Ray – a highly respected football administrator.

But the Hawks will head to Hobart to face North Melbourne without running defender Changkuoth Jiath, who is being held out due to a bruised knee which the team hopes will allow him to play next game.

The post Oliver and Naughton back for grand final rematch; Adams returns for Magpies first appeared on europesportsnews.com.