Matt Moylan is on the verge of a new two-year deal with Cronulla and the five-eighth hopes his days riding rugby league’s “roller coaster” are done as the Sharks chase a top-four berth.

A physical Moylan helped the Sharks to an 18-6 win over the Canterbury Bulldogs in torrential rain in front of 8837 fans at CommBank Stadium on Saturday afternoon.

Now the 31-year-old, who signed a cut-price deal for the 2022 season amid a form downturn, is vowing to repay the faith shown in him by coach Craig Fitzgibbon.

The in-form Moylan has played every game this year and hopes an injury-riddled run is behind him as the Sharks mount a case to go deep into September.

“It’s just come from being available, being able to train, being able to play. I’m not on that roller coaster of being injured and in and out of footy,” Moylan told the Herald.

“I don’t want to go anywhere. I’m really enjoying my time at Cronulla and I’m grateful for the opportunity they gave me to hang around for another year. I just want to keep repaying the favour to the club and to ‘Fitzy’ for giving me the opportunity. 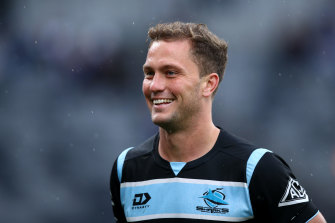 “I’m pretty confident with where we’re heading. With a new coach and a few new players in key positions, we’re always going to be developing as a team.

“We’ve still got a lot of hard work in front of us to be the finished product. We’re taking steps in the right direction and it’s something we can keep building on.”

Every step made a splash as the Sharks spoiled Matt Burton’s final State of Origin audition.

More pressing for Bulldogs coach Mick Potter, who watched the game from home in COVID-19 isolation, is the wellbeing of debutant Declan Casey, who was stretchered off after being knocked out in a collision with Sharks prop Andrew Fifita. So too the fitness of Tevita Pangai jnr, who missed the entire second half due to a left ankle injury. 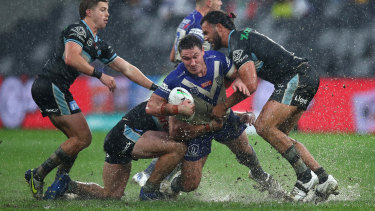 The Sharks beat the Bulldogs in extremely wet conditions in Sydney’s west.Credit:Getty Images

Burton is favoured to keep his spot as one of NSW coach Brad Fittler’s centres when the Blues head to Queensland looking to win a series decider behind enemy lines for the first time since 2005.

The 22-year-old had an Origin debut to remember in game two. The Bulldog was so impressive Andrew Johns declared, “you simply can’t replace Matt Burton”.

Should he be a walk-up start for game three, Fittler has three options to fill the other centre spot. Among them is Jack Wighton, the Blues’ best in game one who has 80 minutes to prove his worth on Sunday after missing game two because of COVID-19. Before this week, returning Rabbitoh Latrell Mitchell had not played since round five. Incumbent Stephen Crichton hasn’t set the world alight but also hasn’t put a foot wrong.

Stand-in Bulldogs coach Craig Sandercock said Burton had surely done enough to retain his place in the Blues side despite Canterbury falling at the hands of a Sharks outfit inspired by Moylan and halfback Nicho Hynes.

“Judging by his performance, 100 per cent. It was hard for Matt to put his case forward any more, it was a swimming pool out there. I’m surprised we got the quality game we did,” Sandercock said.

“He was absolutely outstanding in that Origin game.”