British UFC legend Mike Bisping and no 6 ranked heavyweight Tom Aspinall are asked to leave a restaurant after WRESTLING inside, as Aspinall prepares for his fight with Curtis Blaydes on Saturday

UFC hall of famer Mike Bisping has been seen wrestling with fellow fighter Tom Aspinall in a restaurant.

Contents
British UFC legend Mike Bisping and no 6 ranked heavyweight Tom Aspinall are asked to leave a restaurant after WRESTLING inside, as Aspinall prepares for his fight with Curtis Blaydes on SaturdayShare this article

They exchanged jokey words before descending into a grappling match in the dining area, which continued on the pavement after they were asked to take it outside.

Aspinall has enjoyed a remarkable rise in the past couple of years. He is unbeaten after five UFC fights and has risen to no 6 in the heavyweight rankings. 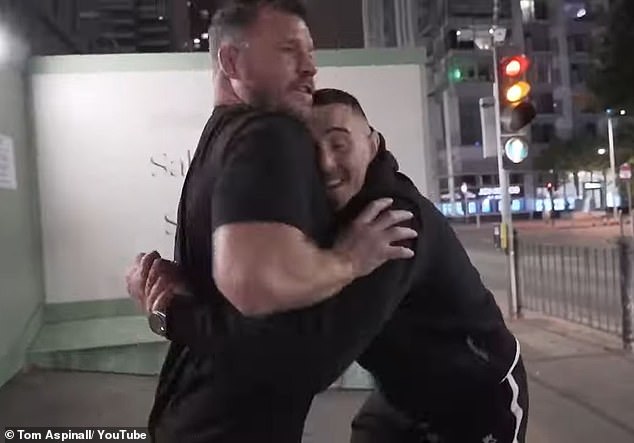 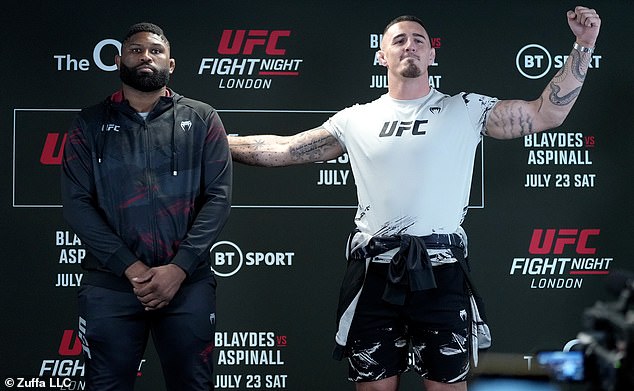 He is due to fight Curtis Blaydes in the main event of UFC London at the O2 on Saturday, with Bisping on commentary.

In a video posted on Aspinall’s official YouTube channel, The fighter is seen laughing with Bisping, as the former UFC middleweight champion jokes: ‘I know you’re the future of British MMA, but I’ll still f****** do you’.

The pair then square up before wrestling in the middle of the dining area. They are asked to leave, and continue grappling on the pavement outside the restaurant. The fight does appear to be in jest, as they laugh at one another throughout.

Despite the strong reputation and promise that Bisping eluded to, Aspinall is still relatively inexperienced in the UFC, with a combined fight time of less than 15 minutes in the octagon.

Speaking ahead of his fight with Blaydes, the 29-year-old felt being something on an unknown could help him in the bout. He said: ‘I just have so much that I’ve not shown, and people don’t know what to expect.

‘No one’s got any idea. Curtis, or anyone else in the heavyweight division, doesn’t know what I bring to the table, because I’ve not shown it yet.

‘I’ve shown 10 percent of my game, because my octagon time is so short. No one has really seen what I can really do. So I have so much that nobody knows about, which is a massive advantage to me.’

Blaydes is ranked two places higher than Aspinall, and is likely to present the Brit with his toughest challenge to date.

The post Mike Bisping and Tom Aspinall WRESTLE inside a restaurant first appeared on europesportsnews.com.