MARTIN SAMUEL: Oleksandr Usyk was powered by the will of a nation. Vladmir Putin is struggling with such defiant resistance from Ukraine, so what chance did Anthony Joshua have?

Oleksandr Usyk accepted the flag with pride and grace and unfurled it before the cameras. He arranged it, neatly, carefully, and draped it across the table.

Contents
MARTIN SAMUEL: Oleksandr Usyk was powered by the will of a nation. Vladmir Putin is struggling with such defiant resistance from Ukraine, so what chance did Anthony Joshua have?Share this article

The yellow and blue Ukrainian standard of the 205th battalion — The Colours of Freedom, according to the shirts worn by his entourage here in Jeddah — were a gift, presented after his second victorious fight over Anthony Joshua.

The soldiers, his countrymen, had signed it. Now, he had two patriotic mementoes. Another flag, also bearing the names of men resisting the Russian invasion, had adorned his dressing-room wall at the King Abdullah Sports City Arena. 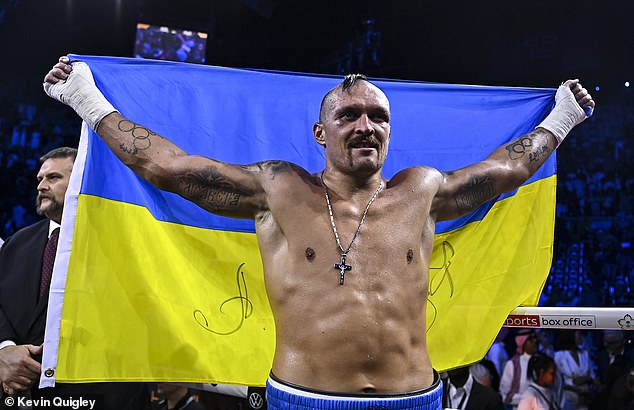 Joshua was still computing the magnitude of his defeat in the depths of that auditorium. Plainly, he was struggling with it, but there was no shame. Losing to the better boxer is a fact of life in his sport. Also, for all his talk of strategy and character, Joshua had run into a force even more powerful than one exceptional man.

As was obvious, as he sat behind the banner endorsed by comrades ready to lay down their lives at any moment, Usyk was powered by the will of a nation.

‘Defending the title of world champion is a symbol that all those who are of Cossack sort will not give up their own, they will fight and will definitely win,’ wrote President Volodymyr Zelensky in the aftermath. This is not the usual blather around fights.

There was plenty of that, too — long speeches telling Joshua he was the real winner, although the only judges’ scorecard that was derided was the one that had him ahead.

Yet the emotion that has surrounded Usyk’s title defence this week is as real as the horrors at home, as real and necessary as the Volunteer Battalion defending Kyiv that Usyk had joined before being told he would do more good for morale as a fighter in the ring. 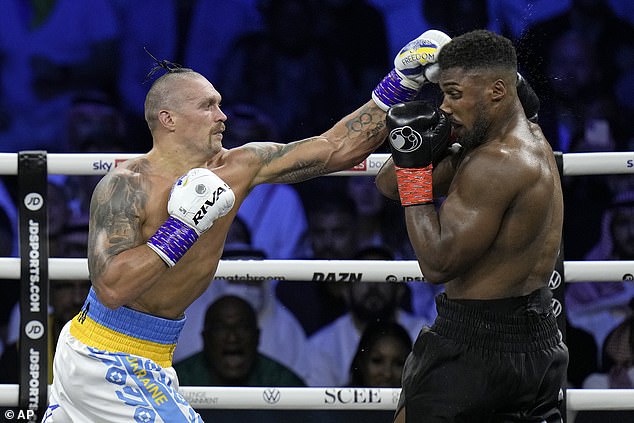 When Usyk spoke, Ukraine’s colours to the foreground, he did not do so as an individual. He spoke for his country, for the names on the flag and for anyone who recognises the plight of a nation fighting simply for the right to exist.

‘It was extremely important for my country,’ he began. ‘I boxed for the whole of Ukraine and half the world. In spite of my ability to control my emotions I was worried about that.

‘During round eight I saw in Joshua’s eyes that he was feeling victorious. I told myself, ‘You cannot stop, you must not stop, you just cannot stop’. Big things were at stake. And now the victory is with Ukraine. Ukraine won.’

Some post-fight orations sound like empty rhetoric. Not with Usyk. Not right now. Everything he says, everything he does — this cruiserweight from Simferopol — becomes a metaphor for his country’s struggle against an overwhelming opponent.

It wasn’t that Joshua failed to execute his game plan to work Usyk’s upper torso. At the halfway stage in Jeddah he had thrown more body shots than in the entirety of their first fight at Tottenham Hotspur Stadium.

Yet Usyk absorbed it. Eddie Hearn, Joshua’s manager, admitted believing that his man was on the brink of victory at the end of a magnificent ninth round.

He started the 10th impressively, too. Yet then, from a well of pure determination, Usyk came back. The 10th became his best round, the 11th and 12th no less impressive as he battled through exhaustion to repel the bigger man’s increasingly desperate attempts to regain his crowns.

Joshua is no evil dictator but as the bigger, stronger warrior, here was Ukraine’s mighty resistance to invasion made flesh.

‘Joshua didn’t use his size advantage at the end,’ said Usyk. ‘Size doesn’t matter when you’re fighting, it’s not that important. There is where the real spirit works.’

And it was in those rounds that Joshua was broken. There was something of the hare and the tortoise in his plaintive questioning of Usyk at the end. ‘You’re not strong, how could you beat me?’ he asked. ‘Because of skill? I had character, I had determination.’

Not that Usyk is a tortoise. With his rapid defensive weaving, anything but. Yet to a man of Joshua’s frame it must seem almost impossible that twice, and over 24 rounds, he should be consistently out-pointed and outfought by a man punching, quite literally, above his weight.

Indeed, the lesson Joshua received on Saturday — when he fought a considerably better fight than first time around — was chastening. So much greater in many ways than numbers on a scorecard, or the dispassionate assessment of three judges at ringside.

Joshua’s bizarre speech at the fight’s conclusion — having initially tossed two of Usyk’s belts disrespectfully from the ring and exited, before reconsidering and returning — was evidence of a scrambled mind. Not from concussion, as was feverishly speculated, but from the havoc wreaked on rational processes.

It turned him into a cringeworthy caricature, rambling on the microphone while the champion waited patiently for his turn, a Kanye West moment as some concluded, referencing West taking the microphone from Taylor Swift at a 2009 awards ceremony, insisting her prize for ‘Best Female Video’ was undeserved.

Yet even as we listened to Joshua’s vain and self-serving monologue, even as we felt the awkwardness of a man who had always carried himself so well, we appreciated the blow he had taken to be so reduced.

Joshua genuinely dreamed of a unification fight with Tyson Fury. He truly saw that as his destiny. That is no longer the fight the world wishes to see. They think they know Joshua now. That he will always be undone by a better technician. And Fury is a better technician.

Usyk had gone by the time Joshua entered the post-fight press conference. Surrounded by blue and yellow well-wishers he was incredibly generous with his time, and his face, given his status and his journey that night.

His manager, Alex Krassyuk, remained, recounting tales of 100kilometre bike rides in searing Dubai heat, of marathon swimming sessions, of feats of underwater endurance. The man, the myth; except it’s no myth. It’s the man.

And then Joshua entered. Still hurting. Still pained. He would weep, later, as the questions brought home the enormity of what had just happened. He bumped fists with Krassyuk but, privately, the older man wanted more. ‘AJ, I want to tell you, you have the biggest heart,’ he began. ‘You are the man.’

And then he bid him sit down and the pair talked quietly on the steps of the podium stage, until everything was said, and done. ‘Come up here and tell them that,’ Joshua pleaded, perhaps only half-joking and in need of validation. Yet there was clearly mutual admiration despite the uncomfortable events in the ring.

It isn’t written in the stars that Ukrainian athletes are carried to glory by the inspiration of adversity, but Joshua was up against more than just a brilliant fighter here. Usyk was asked the future for his country.

‘That we will win,’ he said. ‘That our economy will grow, that tourists from all over the world will travel to Ukraine because it is beautiful and rich in history.

‘Now the whole world knows Ukraine is defending itself against the second biggest army in the world, and we stayed strong. Open your eyes, Ukraine will never give up. We will defeat them, we just need a little more time.’

Vladmir Putin is struggling with such defiant resistance. What chance did Anthony Joshua have?

The post MARTIN SAMUEL: No shame in Anthony Joshua's loss against Usyk first appeared on europesportsnews.com.