Some managers might choose to relieve the pressure on a new signing ahead of a much-anticipated home debut. But Pep Guardiola has gone the other way insisting Manchester City fans are about to witness up close a striker who has it within him to become “the greatest of all time”. The Catalan also says unlike Lionel Messi – who was the only player Guardiola has worked with who was near complete at Haaland’s age – the Norwegian frontman must continue to work hard to improve his game.

The Man City manager’s praise are further evidence that six weeks working with Haaland has convinced him he is working with exceptional raw material both physically and technically.

Yet as importantly, Guardiola’s sky-high praise reveals confidence that in his showpiece summer signing he has a player who not only can handle but will thrive on added pressure.

“He is a top striker and if you put the names of the biggest strikers of all time at that age, after how many games and how many goals, he’s the greatest,” said Guardiola.

“You see how many games he played in Salzburg to here. How many goals? But he’s still at a young age. Tomorrow will be a new challenge and he’s aged 22 with a long career ahead of him and he has desire to be better he will continue to improve. 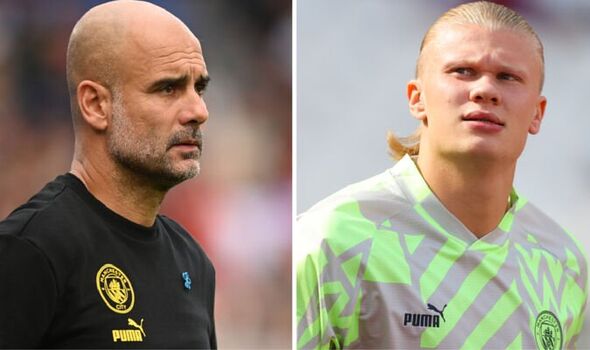 Haaland scored 29 in 27 games for Salzburg, 86 in 89 games for Dortmund and has two in two for City after last weekend’s Premier League debut. And with newly-promoted Bournemouth in his sights on Saturday afternoon he will be hopeful of adding to his near goal a game record since joining Salzburg in 2019.

Guardiola has been as impressed with his link-up play and his general attitude around City’s training ground. He said: “What I see in the training session is that he was calm after Liverpool and calm after West Ham. 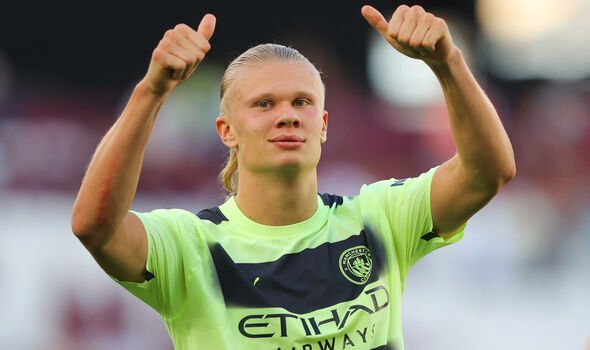 “There will be moments when he doesn’t score goals they are going to say maybe he’s not good. But you have to be calm in the bad moments. He is an incredible competitor but what I’m impressed with is he is a very humble guy.

“It shows in how much he talks with the young players, not just the important ones. He’s exceptional but I think he can be better and have the will to do it.

“I have never seen a player around 21 or 22, maybe Lionel Messi was already in that band but the rest were never the finished business, always you can improve. We’ll try to make him a better player. That is the reason why we are here is to try to help them.”

City will be without Kalvin Phillips and Cole Palmer for the visit of Scott Parker’s Cherries but Guardiola reported everyone else fit and raring to go. And with Haaland looking to kickstart his City career in front of home fans for the first time it could be a long afternoon for the south coast outfit.