Check back throughout the day for further updates

Adams ruled out for the rest of the season

Brisbane have been dealt a major blow on the eve of their elimination final against Richmond, losing key defender Marcus Adams for the remainder of the campaign.

As the Tigers prepare to make a call on Dustin Martin, the Lions confirmed Adams was still experiencing delayed concussion symptoms after he was hit in the ribs in the win over Carlton in round 21. He has not played since.

He had made slow progress, and is still experiencing symptoms, including migraines and blurred vision. 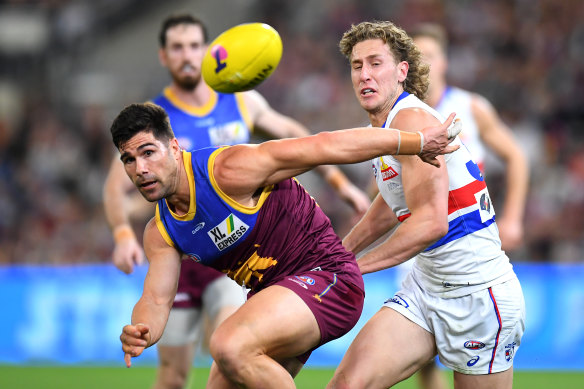 Lions defender Marcus Adams has been ruled out of the rest of the finals, regardless of how deep a run his team makes.Credit:Getty Images

The Lions had been hopeful he would be fit come Thursday but coach Chris Fagan said on Monday Adams would not play again this season – regardless of whether the Lions launch a deep September run.

“We’ve had a bit of instability in our back six to be honest. Since the bye we’ve played about a dozen players through there, if not a few more,” Fagan said on SEN on Monday.

“We haven’t been able to stabilise it this week because we’ve lost Noah Answerth due to suspension and Marcus Adams looks like he’s done for the year with his concussion.

“There’s still a bit of a disruption there, but that’s what this season is all about, giving opportunities to players and a lot of those guys who will play in the backline this week have played a few games this year and we look forward to them making a strong contribution.”

Adams is a key plank of the Lions’ defence, and would likely have spent time on Tom Lynch and Jack Riewoldt come Thursday. He ranked third for intercepts and rebound-50s for the Lions.

However, utility Callum Ah Chee, who was concussed in the same match when crunched by Blues skipper Patrick Cripps, returned via the VFL on the weekend, and is in the selection mix.

The Lions are under enormous pressure heading into the final, for they have a 1-5 win-loss record under Fagan, including four defeats at the Gabba and two straight-set exits. Their defence has been a major issue, for they leaked goals, and let slip a seven-goal lead when they last met the Tigers in round 20.

That win has sparked the Tigers, who have won their past four matches, and expect to have Martin return from a hamstring strain. While Martin has not played a senior match since round 16 and may be rusty, the three-time Norm Smith medallist remains a match-winner.