Lewis Hamilton was left puzzled while Max Verstappen and George Russell laughed at Ferrari’s strategy during secret talks after the Hungarian Grand Prix. All three drivers appeared shocked at Ferrari’s decision to switch to the hard tyres as they discussed the strategy call moments after the chequered flag.

While watching coverage of the race in the post-race cool down room, Hamilton appeared baffled at Ferrari’s call to switch to the slowest compound tyre.  In a puzzled tone, the seven-time champion said: “Ferrari were on the hards?

Verstappen and Russell laughed out loud, with the Dutchman simply responding: “Yeah”.

Ferrari put Charles Leclerc on the hard tyres for his third stint in a decision which dramatically backfired. The Monegasque had no pace on the compound and lost the lead to Verstappen within just a handful of laps. 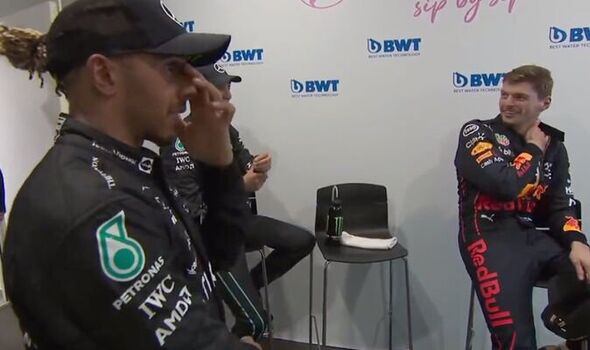 Even a brief spin for the Dutchman couldn’t stop his momentum on the medium tyres and Leclerc was just a passenger as the Red Bull star passed a second time. He fell away from contention within laps and even dropped behind Russell into third moments later.

Ferrari eventually pulled Leclerc back into the pits for a soft tyre towards the end but this dropped him down to sixth. The call cost Leclerc a chance to challenge for a podium and even the victory as Verstappen extended his lead in the championship to 80 points.

Leclerc appeared frustrated in his post-race interview as he branded the decision to switch to the hard tyres as a “disaster”.

He added: “We need to speak with the team and understand the thought behind putting the hard tyre on because I felt very strong with the medium. Everything was under control and for some reason, I don’t know why, we went on the hards.

“I said on the radio I was comfortable on the medium and I wanted to go as long as possible on those tyres because the feeling was good. I don’t know why we took a different decision.”