“The only way I can describe it, it’s like being in a nightclub rave and people are going off… We’ve got some quality boys who can create stuff out of nothing, so just got to get rid of the nightclub scene.”

Music to the NRL Integrity Unit’s ears. The rest of the top eight? More worried than an inner-city boomer with sensitive ears as Club Rooster goes off on a weekly basis.

Luke Keary and Sam Walker get better with every game as on-ball conductors of the rolling red, white and blue ‘rave’ – as Keary dubbed their attack in an ABC Grandstand post-game interview earlier this month.

Victor Radley shifts left, right and through the line as James Tedesco and Joey Manu rove around the ruck, 100-kilo No.1s boasting sleight of hand that belies their frames, if not their fleet feet.

Sam Verrills offers a fifth playmaking option at dummy-half. Bench utility Connor Watson started his career in the halves, as did next man up Drew Hutchison.

Keary, with three premierships and a decade in the NRL, can’t recall anything quite like it.

“I don’t think I’ve seen a team with this many ‘on-ball’ players,” he tells the Herald.

“Guys wanting the ball in their hands as much as some of the guys in our team.

“And that’s what we’ve had to juggle and learn how to handle. When to push and pull back, that’s always going to be a work in progress for us, just because of the type of players we have.

“The first thing we had to do was identify that. That it’s our strength and our weakness.”

An 18-6 half-time lead over Manly recently proved exactly that. Sniffing a pile-on, the Roosters restraint went out the window, their completion rate with it, and ultimately only a single penalty goal was added. 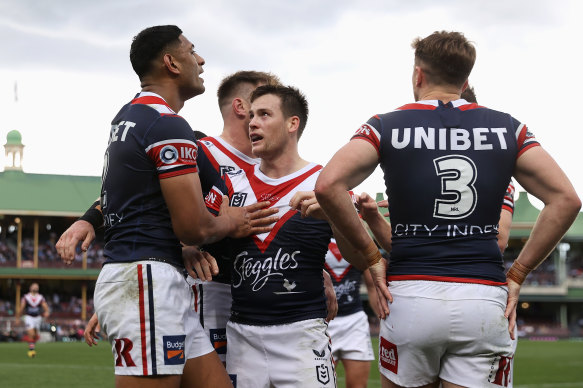 Luke Keary and the Sydney Roosters are hitting top gear.Credit:Getty

Champion Data analysis of the Roosters’ six-game winning run around that match shows Keary, Walker and Radley each averaging three-to-five fewer passes per game than during the first 18 rounds.

“The first thing was identifying that,” Keary says, with his side having tallied 42 points a game over the past six weeks.

“And we speak about it regularly. The next step is probably identifying it on the field at the time. When things start to get wacky, it’s on us older guys to reel it back in a bit.”

With Matt Lodge and Jared Waerea-Hargreaves all muscle and metres up front, Trent Robinson’s bevvy of ball-playing options is enough to keep opposing coaches up at night.

“Normally when you’re game-planning against a team your players use visual cues in defence,” former NRL coach Anthony Seibold explains.

“Against most teams, you can usually say, ‘OK the halfback’s on this side of the field, the five-eighth’s here’. But because the Roosters’ best ball-players are all interchangeable, you don’t know who’s on that short side, who’s going to be the key to a certain play.

“It’s a genuinely two-sided attack with a third playmaking threat on the short side, and it’s very hard to pick up those visual cues in defence.”

While the Roosters have been so spoilt for choice that theirs is a dilemma of fitting all their firepower into one game plan, Melbourne’s season-defining shake-up has come out of necessity.

The Storm’s 11 different spine combinations this year are second only to Canberra’s 13.

Injuries to first Ryan Papenhuyzen, then Jahrome Hughes and the death of Felise Kaufusi’s father left Craig Bellamy and his coaching staff preparing for premiers Penrith a few weeks back with a daunting question – how to turn imposed weaknesses into strengths?

If the Roosters party was just getting started, then Bellamy had all but sounded last call on his side after a fourth-straight loss in round 19.

Shaky wins over battling Warriors and Titans outfits hardly endorsed Melbourne’s long-held VIP status, even if Cameron Munster’s shift to fullback had looked the goods against the Gold Coast.

But with Munster given licence to roam far on both sides of the field, and one slot wider as far as nervous defensive lines are concerned, Nelson Asofa-Solomona’s shift to Kaufusi’s right-edge has seen him up opposite playmakers he outweighs by 30 kilos.

“The way rugby league is now, you don’t get a lot of mismatches,” Matty Johns said this week on his podcast.

“Everyone is almost a common size. But Nelson stands certainly above everyone else, and Melbourne are creating mismatches with him on the edge and running against playmakers – they just can’t wrap [up] the offload.”

Kaufusi’s return pushes Asofa-Solomona back into the middle. But as the 115-kilo, 200-centimetre man mountain told reporters this week, he wouldn’t mind a permanent back-row spot in a revamped Storm pack next year.

And why wouldn’t he? Champion Data has his tackle busts up almost 20 per cent out wide, with almost twice as many offloads and his play-the-ball 12 per cent faster.

Meanwhile, long-time Storm football manager Frank Ponissi is at pains to point out that Munster’s return to the back wouldn’t be possible without the underrated Nick Meaney. 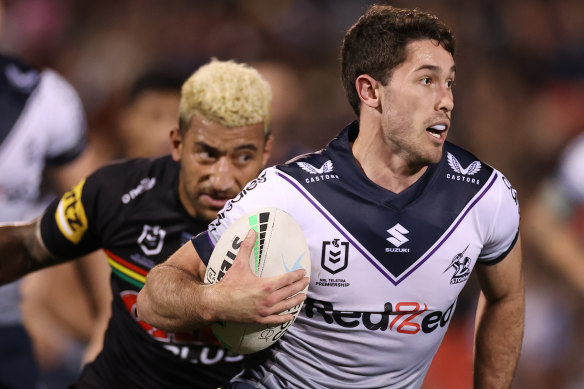 Bellamy you’ve done it again: Nick Meaney has gone to another level at Melbourne.Credit:Getty

“It would’ve been when we were down at Geelong as coaches during pre-season and it was Billy Slater who first raised it and said; ‘I think [Meaney] might have a bit of five-eighth in him’,” Ponissi says.

“Cameron’s our most dangerous player, so getting him more ball and more space is the obvious goal with that. But he and Meaney are able to swap between that front line and fullback without any real disruption to the team and that’s pretty unique.”

Harry Grant and Brandon Smith are making the Storm’s edge offence all the more dangerous through the middle, then making hay themselves as the defensive line is stretched those extra yarns by Asofa-Solomona and Munster operating wider than usual.

“[Grant] is coming out on a really good ‘J-line’ out of dummy-half and doing a fantastic job of getting out past the markers,” Seibold says.

“You think of writing the letter ‘J’ you’re looking to get out and around the ruck and past the marker defenders. They’re engaged with Harry and as soon as he knows that, he’s either running to take them on, or passing to a player in a better position because of his run.”

And so we come to Friday night, with the two most dominant coaches and clubs of the past decade tangoing once more, with a combined 132 points from their last starts.

There’s a dozen or so NRL rivals that would kill for the cattle Robinson and Bellamy have at their disposal, but key to both attacking revivals is the faith placed in their respective players.

Once Slater’s first lightbulb of making a five-eighth out of Meaney flashed, Melbourne’s senior players and coaching staff worked it all out together.

At the Roosters, the calls that trigger Manu’s in-field forays are largely left to the game’s best centre.

Twenty-year-old Walker is trusted with the No.7 jumper, the lion’s share of kicking duties and learning “how you push a team around without touching the ball” as Robinson put it recently.

Who’d have thought – an NRL coach trusting his players with the keys to a nightclub.

The post Keys to the NRL nightclub: How the Roosters rave and Storm kicked on first appeared on europesportsnews.com.