John McEnroe has warned the rivals of Rafael Nadal that the tennis icon will be in the hunt to win the US Open despite his recent injury problems. The Spaniard went into Wimbledon this summer chasing a calendar Slam, having captured both the Australian Open and French Open in 2022.

However, after battling through an abdominal strain to come through his quarter final with Taylor Fritz, Nadal never made it to centre court for his final four clash with Nick Kyrgios. The 36-year-old was forced to withdraw from the clash after a scan revealed the extent of the damage.

It means he’ll head into Flushing Meadows next week in a similar position to this January, where he triumphed in Melbourne despite coming off the back of a lengthy lay off caused by a foot problem. Nadal has prevailed four times in New York, winning in 2010, 2013, 2017, and 2019.

His chances of another major title have been undoubtedly raised by the absence of main rival Novak Djokovic, who has been unable to travel to the US over his continued refusal to be vaccinated against Covid-19. And now pundit McEnroe has talked up the chances of the all-time great. 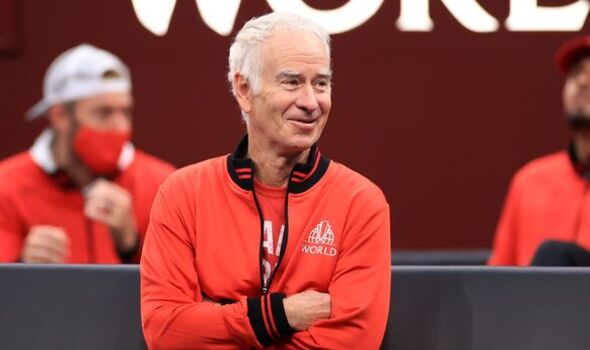 “What we do know is that he could win this because he just won the Australian Open having not played,” the American told tennishead.net. “Rafa is definitely one of the favourites. There’s no question about it. Rafa has as good a chance as anyone to win this, if not more of a chance.”

Nadal now sits on a record haul of 22 major titles, one clear of rival Djokovic. And it’s a record that McEnroe thinks proves he has what it takes to prevail again in New York: “The guy’s won 21 majors, what is it, 22 majors?” he added. “I’m losing track. It’s incredible. We can never write him off.”

DON’T MISS:
Emma Raducanu speaks out on injury fears after tears at US Open ahead of title defence
Daniil Medvedev gushes over ‘legendary’ Serena Williams at US Open – ‘Something special’
Emma Raducanu in tears in injury scare as Brit twice halts US Open practice

The top seed is defending champion Daniil Medvedev, who Nadal dramatically beat in the final down under. The Russian himself was absent from SW19, over the controversial ban on Russian and Belarusian players.

Nadal will begin his campaign late on Tuesday night against Australian player Rinky Hijikata. His only match since Wimbledon came this month in Cincinnati, as Borna Coric beat him in three sets.

The post John McEnroe outlines clear view on Rafael Nadal ahead of US Open – No question about it first appeared on europesportsnews.com.