Asked this week if there was one particular “hit” or “miss” from his two stints as Hawthorn president, Jeff Kennett surprisingly did not rate the 2008 premiership – his lone flag in charge – particularly high.

“Oh no, that was just what we trained to do and what we were training to do. I don’t think that was a great hit in that sense,” Kennett told The Age in what could be construed as a final dig at former coach Alastair Clarkson.

“I think [Tuesday] night was as good a hit as anything when we handed over the jumpers to our players in the AFLW team to move from being, as we have been, a male AFL team, to now being able to introduce ourselves [in the AFLW]. I think that is a very important step in the history of the club. That’s as good as anything else at the moment.” 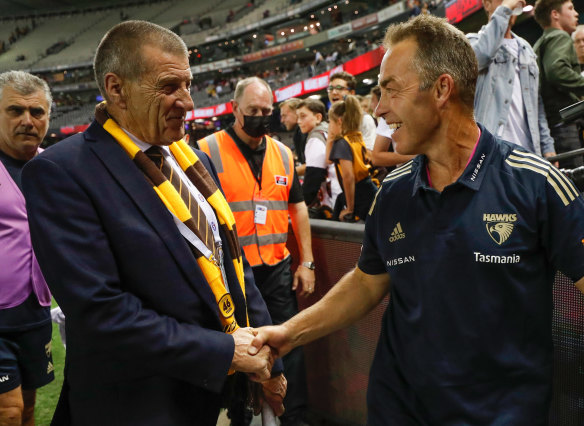 Hand in hand: Jeff Kennett and Alastair Clarkson experienced great success together, but their relationship was rocky.Credit:AFL Photos

And therein lies the riddle that Kennett can be. He will have his last game in charge on Sunday when the Hawks aim to spoil the Western Bulldogs’ finals bid in Launceston. He will remain in power until December when he steps down at the annual general meeting and is replaced by his deputy and ally Peter Nankivell, after agitation for an early departure from the Hawks for Change group.

Say what you want about Kennett, and he has heard it all, but this much is clear – from a media perspective, he will be missed.

“No, it [stepping aside] is just part of life, it’s no different. I haven’t even given it any thought. You are the first person who has asked me,” Kennett said.

“[It’s] just another game. I look forward … to going to Tasmania and I look forward to watching the game and I hope our guys can win the four points. I always like Tasmania – I think it’s a lovely place to go.

“It’s not as though this is happening overnight. It’s been building up for a long time and I have been very well-adjusted to the change, and I am looking forward to it.”

The former Victorian premier has never been afraid to throw his weight around during his two stints, the first from 2006-11 that yielded the 2008 flag and then the so-called Kennett Curse when he famously declared after that triumph that Geelong did not have the “mental drive” to beat the Hawks. The Cats won their next 11 meetings. 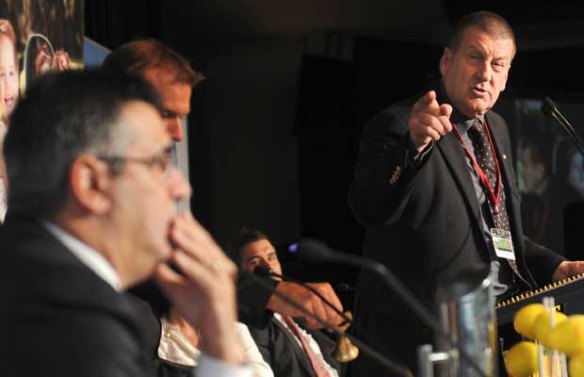 Jeff Kennett has always maintained a close eye on AFL House, including when Andrew Demetriou was in charge.Credit:The Age

Kennett’s second coming from 2018 will be remembered for yielding the scalp of Clarkson. Although it has been argued Clarkson ultimately played the Hawks off a break with his one-year sabbatical while still being paid the remaining $900,000 of his contract.

Kennett has taken on rival clubs, those who challenged him internally, Clarkson and AFL head office in his time, through this ensuring the Hawks remained one of the wealthier clubs.

He has kept a vigilant eye on AFL chief executive Gillon McLachlan and his predecessor Andrew Demetriou, and has never been afraid to make his feelings clear, in a throwback to the robust club presidents of the 1970s and 1980s. 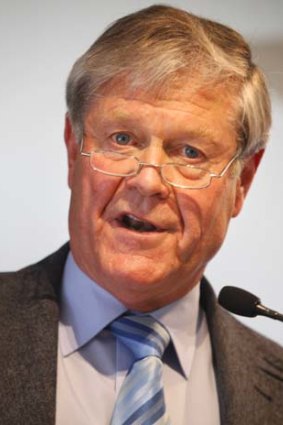 Jeff Kennett turned to David Parkin in 2007 when assessing whether Alastair Clarkson should remain as coach.Credit:Angela Milne

“Jeff has made a significant and profound contribution to the Hawthorn Football Club. He leaves the club in a strong financial position and should feel very proud of his time as president,” Demetriou said.

Some would say Kennett’s way has been a good thing, for there are several club presidents who barely, if ever, say boo publicly these days because either their side is on the AFL teat and/or they fear league retribution. Not Kennett, who has even used his letters to club members to make his point.

“I have said things that I believe need to be said from time to time. Being one of 18 shareholders, the AFL are commissioned to run the league but, at times, the interests of the club, and the views of the club, are needed to be heard. That’s just part of your job,” he said.

Indeed, Kennett was even included in McLachlan’s coronavirus taskforce in 2020 when the league navigated a potentially door-closing financial crisis. It was a smart move by McLachlan to bring him inside the tent, but also highlighted the public voice Kennett has.

He will probably be best remembered for his public sparring with Clarkson, even as early as 2007 threatening to sack him when David Parkin and Gerard Healy were asked to give their assessment. In 2010, Kennett suggested Clarkson have a stint in the reserves after the Hawks scraped past the Tigers. In 2013, even when he wasn’t in charge, Kennett famously called 3AW after a narrow loss to Geelong and said Clarkson should be replaced. Then there was Kennett’s sketch on a whiteboard, at a time when the Hawks were struggling. Some argue it was a coffin, Kennett maintains it was an inverted pyramid.

Clarkson’s time was finally up last year when the club mismanaged a handover with Sam Mitchell, the plan having been for the master to have tutored the apprentice for another season. But that was never going to work, even under the club’s family club mantra.

“We recognise that while we are a family club, and this hasn’t been the most traditional way of a family to behave, it does happen from time to time,” Kennett said at the time.

Kennett changed the club constitution in 2008, limiting presidents to just two three-year terms at a time, but the constitution was updated in 2018 to allow Kennett to return for a second stint as president. This came on the back of a period of administrative chaos when president Richard Garvey, on the back of three flags under Andrew Newbold, had only two years in charge, while chief executive Tracey Gaudry lasted only a few months.

Through Kennett’s stewardship, the Hawks have maintained a firm commitment to playing “home″⁣ matches in Launceston, and the ensuing financial benefits from the Tasmanian government. He even suggested last year the Hawks could shift south and become the Apple Isle’s team.

Under public and supporter agitation, the Hawks this year sold the last of their pokie venues, agreeing to terms for the sale of their Waverley Gardens venue to the Melbourne Racing Club. 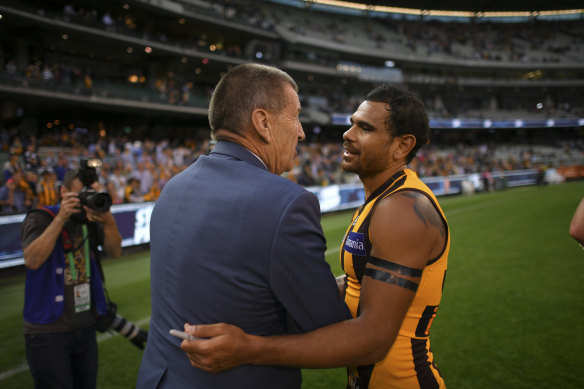 Four-time premiership star Cyril Rioli has fallen out with the Hawks, with the club working to mend the relationship.Credit:Eddie Jim

Aside from spats with Clarkson and AFL House, there have been other controversies, most notably this year with four-time premiership great Cyril Rioli, who had voiced racism allegations from his time at the club.

Rioli and his wife, Shannyn Ah Sam-Rioli, detailed in an interview with The Age in April the events that led to Rioli’s departure in 2018, including an incident with Kennett and alleged comments he made about Shannyn’s designer ripped jeans at Launceston airport. The Hawks were forced to issue an apology to the Rioli family.

“I do not accept and I completely, absolutely, utterly reject that I am in any way racist. It’s an awful slur for anyone to have to bear,” Kennett said later.

“And nor is our club racist and nor do I think the AFL community is racist … but we have a job to do and we have to keep working hard to improve the circumstances of our First People.”

Kennett has been working behind the scenes to deliver funding for the club’s new $100 million Dingley training base, the Kennedy Community Centre, named after club legend John Kennedy snr, although that hasn’t been without controversy when Kennett felt his criticism of the Andrews government’s bungled hotel quarantine system in 2020 had cost the club additional funding.

The good and the … controversy. The Kennett era has had it all.

The post ‘It’s not for me to talk about legacy’: Kennett ready for Hawks’ finale first appeared on europesportsnews.com.