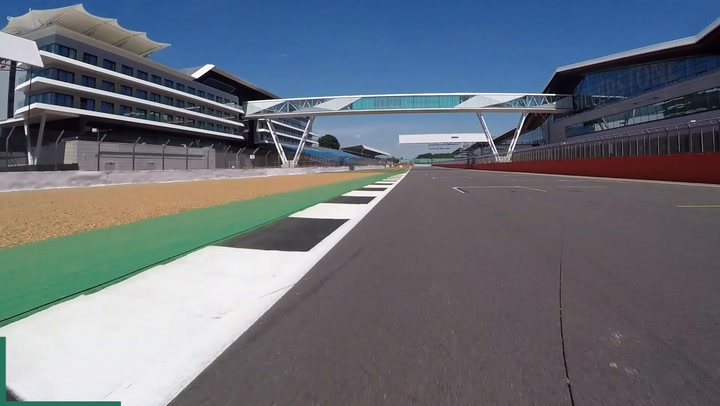 I must have said that to myself upwards of 100 times in the minutes leading up to the point I sat on the back of the bike.

At the end of the day, if I let go, there is no seatbelt, no support and certainly no safety mat to catch me when I land. The risk of injury is phenomenally high.

I do consider myself a little bit of an adrenaline junkie. I've done the world's longest zip line, for example, where you fly above Arab mountains at close to 100mph. But there was something about getting on the back of a bike, with absolutely zero control of what was going to happen, to know you're going to hit speeds of 170mph, that was just terrifying.

READ MORE: 10 Formula 1 drivers you completely forgot about – and what they are up to now

I was at Silverstone, a few weeks before this year's MotoGP British Grand Prix, to meet with a few legends and a few current riders. I would be getting on the pillion (the passenger seat on the back of a motorbike), with former MotoGP rider and current BT Sport pundit Michael Laverty in control.

About an hour before we got changed and headed onto track, Michael said: “I wouldn’t fancy doing the pillion as much. When you’re in control, you get to experience every input, you feel the reaction. Whenever someone else is in control, that scares me more."

In all seriousness, this was actually one of the safest environments to try something like this. And Michael was the best possible pilot. At the end of the day, his crashing days are long past him. He even stepped away from racing because he was actively trying to avoid the injuries, as he wanted to enjoy more quality time with his family. So Michael was never going to take any kind of risk for himself – let alone with a helpless journalist clinging onto his back.

Would you get onto the back of a bike? Let us know in the comments section. 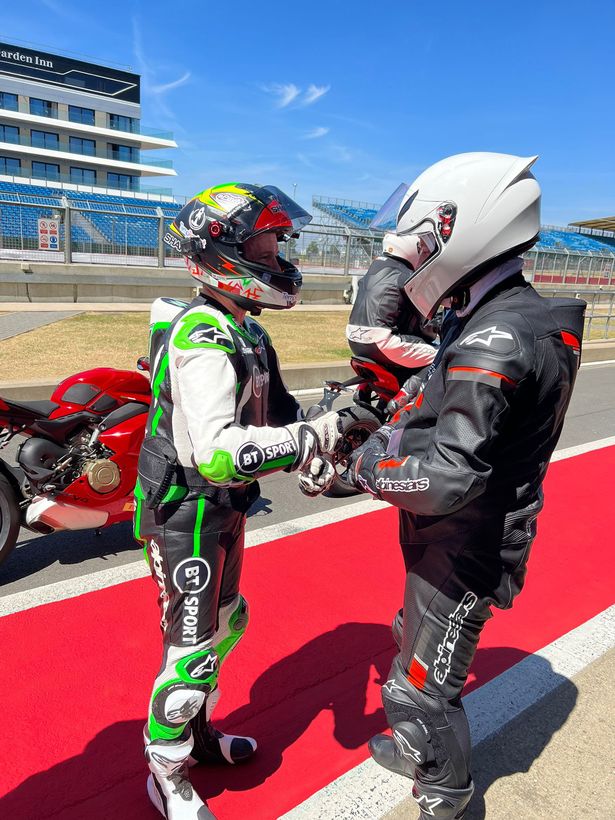 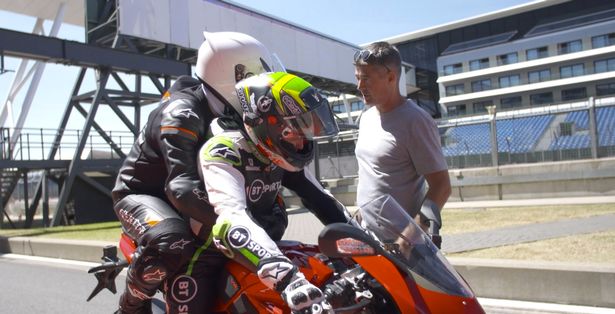 "It’s an inherently dangerous sport," he admits. "It’s always going to be but you put it to the back of your mind and move on. When it starts coming to the forefront of your mind and you’re thinking about it, in my opinion as a racer, that’s when it’s time to stop.”

There was time before we got changed into our leathers to get a little bit of advice from Jake Dixon, the British Moto2 star, who has landed two podiums this season.

“Go with the flow of what the rider in control of the bike is doing," Jake says. "Make sure you lean with him, don’t lean away from him because it’ll help him when he’s riding and give you a better experience as well. That’s the biggest thing.”

Basically, don't do anything. You're a sitting duck. Just enjoy the ride.

Weirdly, changing into the leathers, kindly provided by Alpinestars, was the moment I was filled with a lot more reassurance. It feels like you are wearing a massive moon suit, but the thickness of it – and the reassurance of an airbag in your back – really does put you at ease. 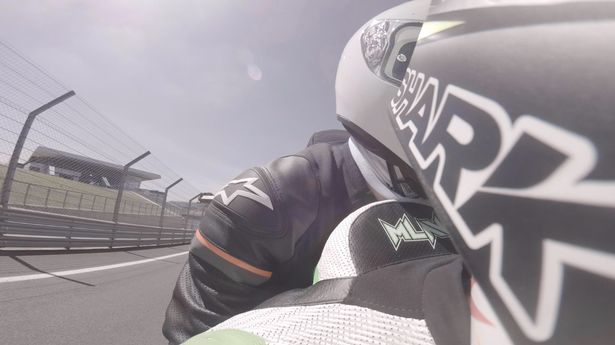 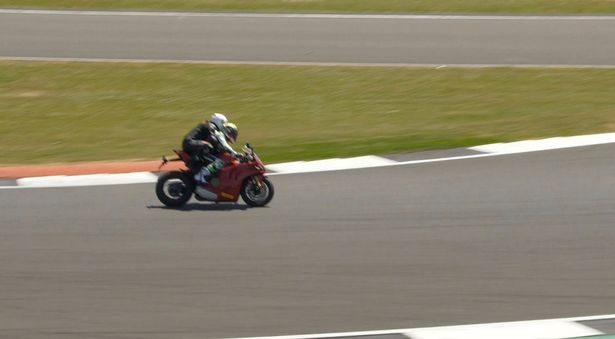 So out onto track we go. The sun was beaming down on us and, as we headed out for something of a gentle stroll around our first lap, I could really take in how incredible of a venue Silverstone was.

“I love it," says Michael. "It’s one of the best tracks in the world and it’s got such different character from one side of the track to the other.

“You look at the turn one we use for MotoGP and you get the high speed corners, the long Hangar Straight, the hard braking at Club and Vale. It’s got something to really challenge the riders.

“But with the sun shining, beautiful blue skies, I just love riding around it, it links up really well. One of the best places on the calendar for me.”

That gentle stroll, by the way, only lasted a few corners, because when we hit the Hangar Straight, Michael was always going to give it some. Suddenly, the rush of wind smacks you into the face and you're holding on for dear life.

In reality, it was tough to even open my mouth, because the combination of fear and excitement took over, let alone try and speak to Michael as we're going along.

He hits the brakes quite early and we bank into Stowe, leaning my body with his. 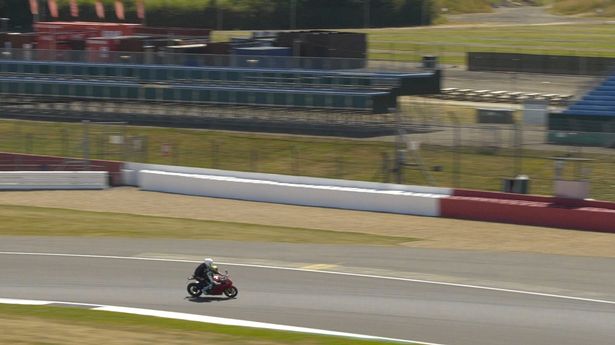 So then we fly past the pits and head off for lap two – and this time I can tell Michael means business. He's quicker on the throttle when we come out of the corners and he is continually patting my hands to make sure I was holding on tight enough, when the reality was that I couldn't have been holding on any tighter. Then we got back round to Hangar Straight and this time, it was for real. I glance down at the dashboard and see us tick over to 140mph, before I look up and see the corner sickeningly close.

The brakes on these bikes are scarcely believable. It was like we had driven into a big cushion, with the speed coming off the bike in less than a second. We banked into Stowe and I caught my breath again.

At least this time, I knew what to expect. We were going to hit Hangar and we go for it. One more lap – but that was the moment I was looking forward to.

This time, we touched 170mph. We even hit Stowe corner at 70mph, but that felt more like a light jog compared to the speeds we had just felt. 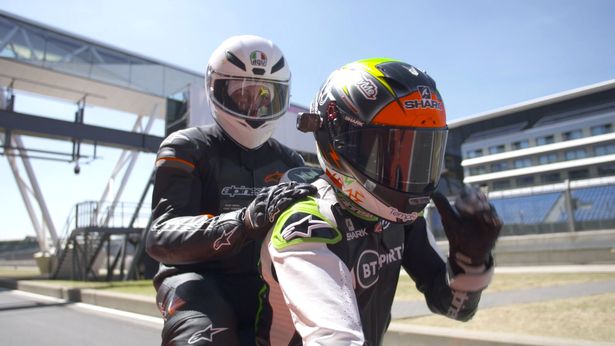 As we pulled back into the pits, and I exhaled quite a few times, I quickly realised that I was not even sitting on the pillion anymore. Such was the adrenaline rush – and my commitment to keeping hold of Michael – that he was just giving me a piggy back.

The overall feeling when I hopped off the bike was quite simply admiration. To do what we had just done, even faster, but while trying to dive bomb up the inside of someone, coming within inches of your friends on track, is something I simply couldn't get my head around. To race motorbikes, I actually think you have to be a little warped somewhere in the head – a bit like goalkeepers in football.

It is, quite simply, a dangerous sport. It's a thrilling one, but these guys really do put their bodies on the line in the name of entertainment. 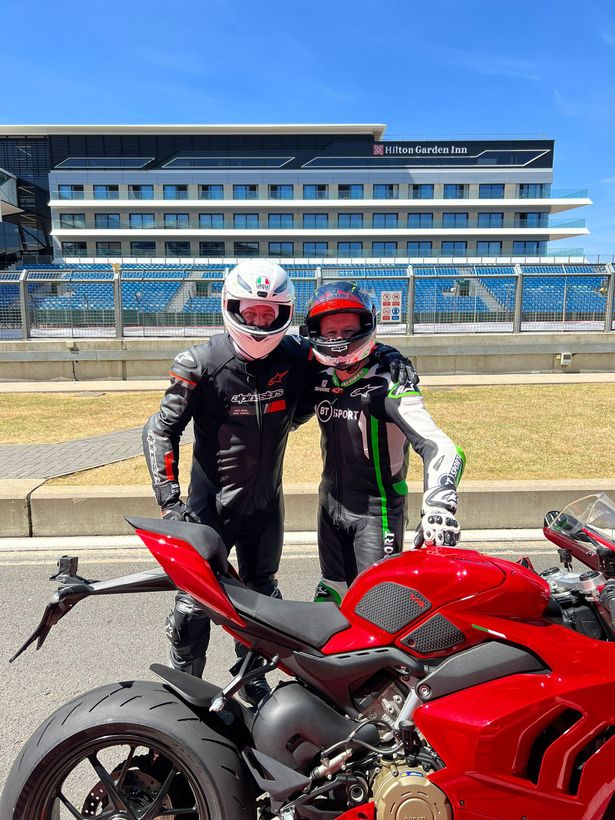 I have always been fascinated by the mindset of these motorbike riders and why they risk so much when they get out on track. And it was perhaps best described by former World Superbike champion Neil Hodgson.

“Do you know what? This might sound like it’s hard to believe but you never wanted to crash because you were always in a championship, you don’t score points," he said.

“The fear of failure outweighed the fear of getting injured. That’s talking about the sport on race circuits, not the Isle of Man TT where, for example, you know if you crash there then there’s every chance you could lose your life.

“I know that if you crash on a circuit you could be incredibly unlucky and lose your life, but the chances of that happening are a billion to one.

“Every time you get into a car and drive, there could be some bloke coming along, looking at his phone that could kill you. Yes, somebody will get killed with that happening, but it’s not going to be you, is it?

“That’s what you feel like on a bike – you know you could get injured, but it’s not going to happen to me.”

The post ‘I went 170mph on back of a bike with an ex-MotoGP star and it was terrifying’ first appeared on europesportsnews.com.