But the 22–year-old playing her first ever Wimbledon was a very gracious winner. “I just want to say sorry that I had to kick out a British player today,” Niemeier said. “The atmosphere was incredible.

“I didn’t want to watch the show before because I was nervous seeing all the players and I just feel honoured that I had the chance to play here today.”

After a parade of the majority of Wimbledon’s former champions, was there not a better way to start the second century of tennis on Centre Court than a match between the world no. 109 against a player just inside the top 100, you might wonder?

JUST IN: Sue Barker breaks down and threatens John McEnroe in sad scenes 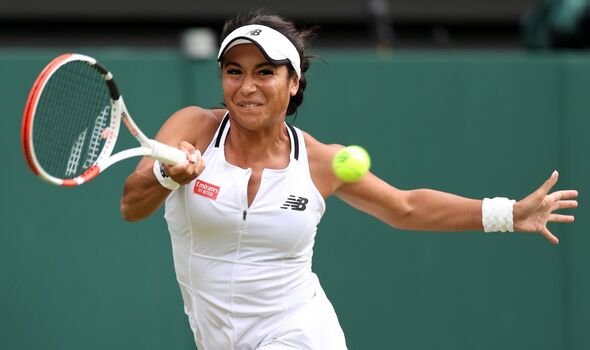 Both players, though, had fought hard for their place in the limelight though. Watson has struggled for years with illness and injury and finally seems to have got things together to put together her best Wimbledon in a dozen years of trying.

Niemeier owed her place in the fourth round to beating the no .2 seed Anett Kontaveit of Estonia with some uncompromising serving backed up by fierce forehands. So soon after the sainted shoes of Roger Federer, Bjorn Borg, Serena Williams had left the hallowed turf, both players could have been forgiven for taking to the court with a feeling of trepidation.

Watson at least had the benefit of having been here before, but it was the German who seemed most at home. She won a brilliant extended rally in the fifth game of the match when she had appeared to be at Watson’s mercy.

It gave her the confidence to steal two break points on Watson’s next service points and Niemeier needed only one to gain the first advantage. At this stage, Watson still had not managed to win a single point on the Niemeier serve. She broke that duck in the sixth match but could not stop her cementing the break with a comfortable hold.

When Watson lost the set by getting broken again, the match appeared to be running away from her. Those concerns deepened with another break early in the second set but Watson, as she has done often here in her career, dug deep and managed to drag the set back level.

But two forced errors and a double fault silenced a Centre Court crowd hoping for a home win and the momentum seemed undeniable. Every minor victory for Watson was met with a mini-fist pump and perhaps the loudest cheer of the day came when she successfully defended the first match point.

But another failure to return to set up another and this time and again the crowd came alive to celebrate Watson’s brilliant lob. It was to be third time unlucky, though, as Watson netted and the 30-year-old left Centre Court for perhaps the last time.