A dozen new faces feature in this year’s All-Australian line-up while just seven players kept their spots from 2021 as the AFL’s team of the year underwent a noticeable overhaul.

Experienced Geelong forward Tom Hawkins was awarded his fifth All-Australian jumper but the 324-gamer earned one of his career highlights by picking up the captaincy. 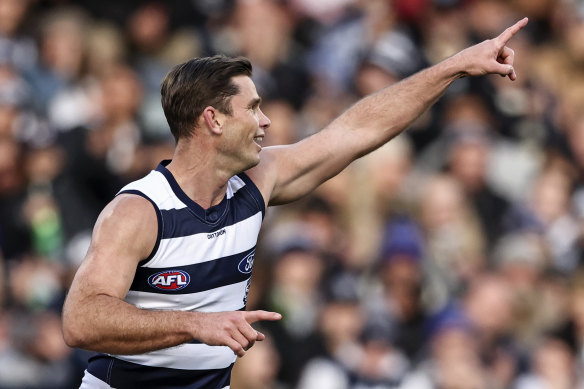 Similarly, Patrick Cripps was named in the AFL team of the year for a third time and was made vice-captain in 2022 in recognition for his important efforts in driving Carlton to the cusp of a much-awaited finals appearance.

Melbourne skipper Max Gawn was named as first ruck while versatile Cat Mark Blicavs was named on the bench to support Gawn in a team that, in theory, is picked with team balance in mind.

Hawkins, star Melbourne defender Steven May, his Demons teammates Clayton Oliver and Christian Petracca, Geelong backman Tom Stewart and Gold Coast midfielder Touk Miller were the others to back up from 2021.

Despite the stack of debutants in the team – including the entire half-back line and the two forward pockets – the squad shapes as classy and talent-driven.

Stewart and May were named on the last line of defence alongside Collingwood’s run-and-gun backman Brayden Maynard, who may have pencilled in his selection with his game against Carlton at the MCG last Saturday. 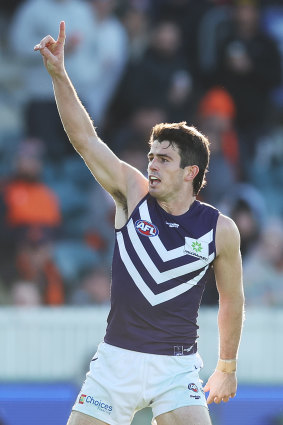 Fremantle star Andrew Brayshaw was named on the bench.Credit:AFL Photos

There were few surprises across the centre line, with Brownlow contender Oliver named in the middle, with the ruck-rover and rover roles allocated to Cripps and another strong contender for the league’s best-and-fairest, Lachie Neale.

Fremantle gun Andrew Brayshaw was crowned the AFLPA’s MVP on Wednesday night but was relegated to the bench in the All-Australian team. That he was missing from the starting 18 is bound to be one of the points of conjecture.

Star Swan Callum Mills, named on a wing, earned his first jumper after 132 AFL matches, while Gold Coast’s Miller featured on the other wing.

The half-forward line was imposing, with dynamic Geelong spearhead Jeremy Cameron named at centre-half-forward, while his Cats teammate Hawkins was named in the full-forward slot.

Demon Petracca was selected on one forward flank, while Richmond’s Shai Bolton, one of the most-improved players this season, took the other flank.

There was no surprise as Geelong’s Tyson Stengle was named in the right forward pocket, with another pleasing story of 2022, Carlton’s Charlie Curnow, grabbing the other pocket.

Having won the minor premiership and fighting with Melbourne for premiership favouritism, Geelong have five players in the team – Hawkins, Cameron, Stengle, Stewart and Blicavs – while the next best represented clubs were the Demons (four) and Carlton (three). Twelve of the league’s 18 clubs supplied at least one representative.

Unsurprisingly, the last players picked – this year’s interchange Blicavs, Brayshaw, Sydney’s Isaac Heeney and Port Adelaide’s Connor Rozee – will come up for the most debate about their spots given that players of the calibre of Bulldogs Marcus Bontempelli and Jack Macrae, Carlton’s Sam Walsh and Jacob Weitering, Brisbane’s Charlie Cameron and Richmond’s Daniel Rioli missed out.