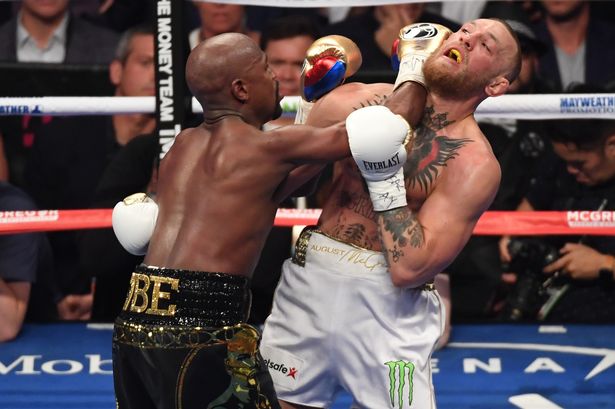 Unbeaten boxing legend Floyd Mayweather has been told he got 'beat up' by Conor McGregor despite his convincing win over the UFC star.

Back in August 2017, 'Money' came out of retirement for one last professional bout in Las Vegas, taking on McGregor in a bout which made the American icon around $300million (£247m). And despite 'The Notorious' putting up a decent showing, it was Mayweather who controlled matters before the bout was stopped in the 10th round.

It took his record to 50-0, and despite numerous rumours of a potential rematch, negotiations for a rematch have never materialised, with Mayweather instead focussing on exhibition contests. But now ex-MMA fighter Chael Sonnen, who once challenged Anderson Silva for the UFC Middleweight Championship, has offered an alternative view on how the last clash panned out.

On his YouTube channel Sonnen, 45, referenced 'The Money Fight' whilst analysing UFC icon Nate Diaz's odds on beating newcomer Khamzat Chimaev: "That line is not going to hold, I'm telling you right now, but [Diaz] is a 12-to-1 underdog," he argued.

In reality, for two of the judges, Mayweather was up in eight of the nine completed rounds, whilst one official scored it at 6-3 in the American's favour. But still, Sonnes argued: "He got his ass kicked regardless of what the crooks in the Nevada State Athletic Commission told you that night."

Is Chael Sonnen talking absolute nonsense? Let us know in the comments section.

Sonnen is renowned for his outspoken ways, and whilst his views may raise eyebrows, they are unlikely to truly trouble Mayweather, 45. Of more pressing concern will be his next foray into the ring against Japanese MMA star Mikuru Asakura.

The rules and regulations are still yet to be confirmed, but it's expected the bout will follow similar formats to Mayweather's previous exhibition showdowns and will be contested over eight rounds. The showdown will take place at the Saitama Super Arena on September 25.

Asakura is a Japanese MMA specialist who competes in the featherweight division of Rizin Fighting Federation. A professional competitor since 2012, he has also competed for Road Fighting Championship,