Check back for further updates.

Milestone man Patrick Dangerfield says winning this year’s premiership would mark a “finishing piece” of career achievements, but it won’t define him as a player.

Dangerfield will become the 99th player in VFL/AFL history to reach the 300-game milestone when he lines up in Saturday’s clash with West Coast at GMHBA Stadium.

The 32-year-old’s career has been littered with individual success – eight All-Australians, the 2016 Brownlow Medal, and three best and fairests with Geelong to go with one at Adelaide. 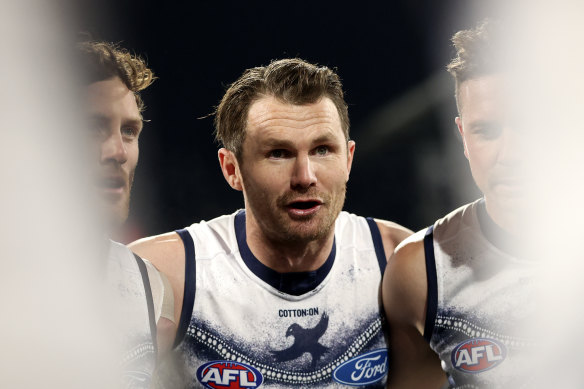 Patrick Dangerfield will play his 300th game this weekend.Credit:AFL Photos

The one glaring omission has been premiership success. The closest he came was in 2020, when Geelong led Richmond by 22 points in the grand final before the Dustin Martin-inspired Tigers romped home to win by 31 points.

With the Cats to finish on top of the ladder regardless of results this weekend, Dangerfield has another golden opportunity to end his flag drought over the coming weeks.

But even if it doesn’t come to fruition, he won’t let it define him.

“I think it’s the finishing piece if you will, but I don’t think it necessarily defines players,” Dangerfield told reporters on Wednesday.

“It’s what we all play for, but there’s so much of our game that you take enjoyment from, not just the final game in September.

“Clearly that would be a wonderful thing to achieve, and we’ve given ourselves a shot this year. We’re in a good position.

“But there’s so much enjoyment externally to just that.”

Dangerfield played 154 games across eight seasons at Adelaide before making a high-profile switch to Geelong at the end of 2015.

Cats coach Chris Scott was full of praise for Dangerfield’s impact both on and off the field.

“From a club’s perspective, we were at a real point of transition when Pat came in, and he changed our club for the better,” Scott said.

“Obviously on the field, but that wasn’t the most significant part in my opinion. He changed us off the field.

“He gave our playing group some confidence and has really influenced the culture that we continue to try to build. He’s been integral to that.”

Scott is urging his players to embrace the growing expectations surrounding the team.

“We’d much rather have the privilege of that pressure than explain why we’re not in contention at this time of year,” he said. “It’s all pretty exciting. You can’t do great things in life without a little bit of anxiety as your partner. We’re feeling good about it.”

Scott is confident both Jeremy Cameron (hamstring) and Rhys Stanley (adductor) will be fit for week one of the finals. “Those two are right on track. They’ve both been running,” he said.

No.1 draft pick Jason Horne-Francis is in contention to return for North Melbourne’s final game of the AFL season following his much-discussed axing.

The 19-year-old was dropped for last weekend’s trip to Adelaide, Horne-Francis’ hometown, after failing to complete an ice bath as required and not meeting the Kangaroos’ preparation standards.

Horne-Francis responded by having a game-high 29 possessions in North’s VFL win against Coburg.

Caretaker Kangaroos coach Leigh Adams felt like he had to make a stand, even as speculation continues Horne-Francis could request a trade back to South Australia after just one year at Arden St.

Adams said Horne-Francis’ attitude had been first-class since and the young midfielder understood why he could not play against the Crows last Saturday. 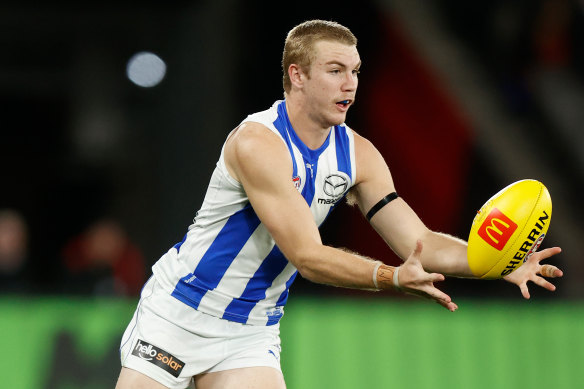 “We feel like we’ve got certain standards that need to be upheld at the footy club and if guys aren’t able to do that then we need to have some consequences so that our young guys can learn,” Adams said on Wednesday.

“He’s learnt a great lesson from that and we are sure he can become a good player from that.

“He just wasn’t able to implement his recovery protocols to the level that needed to be done and that’s a rule we’ve got for our whole footy club.

“He understands it’s not a huge deal in the four walls of the footy club. It was mistake that he made in the heat of some frustration around our loss [against Essendon] … we’ve moved on pretty quick.”

Midfielder Ben Cunnington has pulled up well following his first AFL game in more than a year after his battle with testicular cancer.

The inspirational veteran will back up for North’s final regular season game against Gold Coast on Saturday at Marvel Stadium.

The Kangaroos will avoid their second-straight wooden spoon if they defeat the Suns, as long as West Coast don’t cause the upset of the season and beat minor premiers Geelong at GMHBA Stadium.

Has Rankine played his last game for the Suns?

A recurring shoulder problem means Gold Coast’s Izak Rankine may well have played his final game for the Suns and is facing likely off-season surgery.

Rankine came off late in last weekend’s loss to Geelong after aggravating an existing shoulder issue when landing awkwardly in a tackle by Cats superstar Patrick Dangerfield.

The off-contract 22-year-old forward, weighing up a lucrative offer from hometown club Adelaide, hasn’t trained this week and Suns coach Stuart Dew says he’s in major doubt for the final match of the home-and-away season against North Melbourne on Saturday.

Dew also dismissed the possibility the clash with North could be Rankine’s last with the club as a factor in whether he gets selected or not. 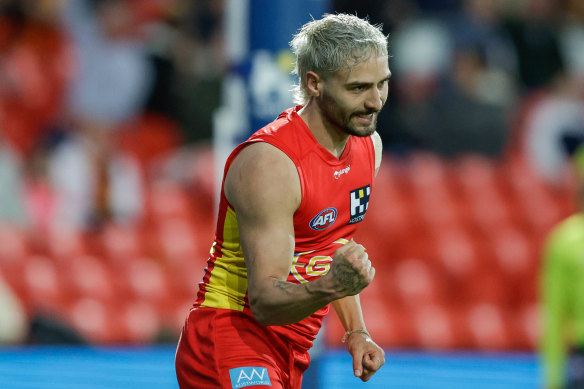 Suns star Izak Rankine is unlikely to play in the final round.Credit:AFL Photos

“In terms of whether it’s his last game or not, that’s hypothetical.

“We know he’s got a decision at the end of the season, but I think the main part is all that external stuff is not going to come into the decision of whether he plays or not.

“If he’s fit to play, he plays, and, if the risk is too great, player’s welfare comes first.”

Dew said Rankine had been battling the shoulder issue for several weeks and regardless of whether he signs a new deal at the Suns or moves to the Crows, a date with the surgeon looks likely. “It’s one of those ones, it’s likely he’ll need an operation at the end of the year.”