Eddie Hearn described Tyson Fury's co-promoter Bob Arum as "mental" – then said he "deserves to be mental" because he is 90-years-old.

The Matchroom chief has regularly found himself verbally duelling with the American boxing supremo. Arum has previously accused the Brit of putting "his nose without knowing in everyone else's business" and even described Hearn as a "novice".

The two juggernauts of boxing promotion could very well be locking verbal horns with each again, if Anthony Joshua is able to defeat Oleksandr Usyk and set up a heavyweight clash with Fury. And Hearn ensured to get an early gut punch on his significantly senior contemporary.

READ MORE: Jake Paul's boxing career will be "over" if he loses to Tommy Fury, claims Eddie Hearn

"The thing is with Arum, he's just mental," Hearn said to the MMA Fighting podcast. "But he’s 90 so he deserves to be mental." After his very cheeky comment at Arum’s seniority, Hearn did ensure to circle back and give Arum a backhanded compliment.

"But if the business is right, Bob will always make a fight," Hearn added. "He'll speak badly about me, he doesn't like me.

"But with others, it would affect the job they do for their client, because of the emotion, which is a really big mistake." Arum aimed a significant verbal uppercut at Hearn in February, after Hearn said Fury would face multiple "hurdles" when it came to getting licensed by the British Board of Boxing Control, ahead of his fight against Dillian Whyte in April.

Do you think Anthony Joshua can beat Tyson Fury if the two go head-to-head? Let us know in the comments section below. 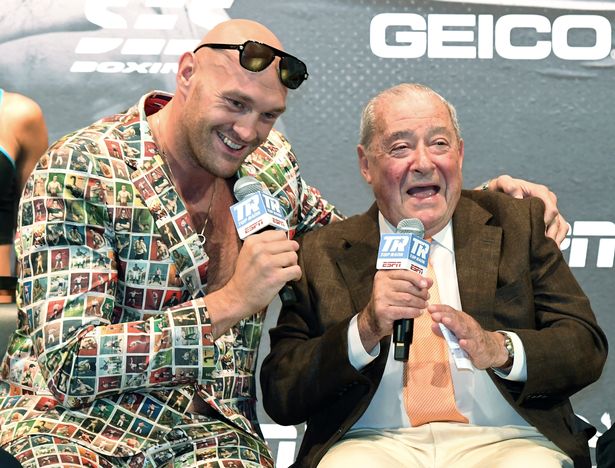 "The problem with Eddie is that he puts his nose without knowing in everyone else's business," Arum said in February. "I mean, look at the difference between Frank (Warren) and myself.

"We don't opine on Eddie. Maybe this, maybe that – it's none of our business. Frankly, we don't know. We have enough with our business. Eddie wants to put his nose into everyone else's business.

"Again, I put that up to the fact that he is still a novice in this business. I promoted fights with his father, a terrific, terrific guy, and his father [Barry Hearn] would be appalled with Eddie's conduct."

The post Eddie Hearn says Tyson Fury boxing chief is “mental” and “deserves to be mental” first appeared on europesportsnews.com.