Richmond have shaken off a spirited West Coast at the MCG on Sunday, but star midfielder Dustin Martin was sidelined in the win, subbed out after half-time with a hamstring complaint.

The club said Martin, who was the most prolific player on the ground in the first half, had “hamstring awareness” at the main break.

Dustin Martin was subbed out of the clash with the West Coast Eagles.Credit:Getty Images

He was subbed out midway through the third term for Kane Lambert, and his omission appeared to change the game, with West Coast winning eight of 11 centre clearances in the third term to cut a 39-point deficit to as close as 11 points.

But the Tigers found a way to hold the Eagles at arm’s length.

Jack Riewoldt kicked his third goal early in the final quarter, and although the Eagles responded via Jack Petrucelle, the Tigers found further answers through Liam Baker and Tom Lynch midway through the fourth term to put an upset win for the Eagles out of reach.

Elliot Yeo was also sidelined in the third term with a hamstring strain, adding to his injury-plagued season. He missed the first month of the season with a calf injury, and has also been sidelined with concussion and under the COVID-19 protocols.

Nic Naitanui made a positive return to the Eagles’ side, however. He led the hitouts and kicked a superb goal in the second term. More importantly, Tim Kelly played his best game of the season, seemingly thriving with Naitanui service.

He finished with 40 disposals, nine clearances and 10 score involvements, and was best afield in a losing side. The Eagles did miss Josh Kennedy, however, who was managed out of the side.

Dusty on full display for a half

While the likes of Clayton Oliver, Lachie Neale, Christian Petracca, and Patrick Cripps get lauded as the best players in the competition, Martin reminded footy fans why he is arguably still the league’s No.1.

He had a clinical first half with 17 disposals – including 12 kicks, four clearances, five inside-50s, eight score involvements and a goal – showing his nous to pinpoint kicks to teammates a number of times. 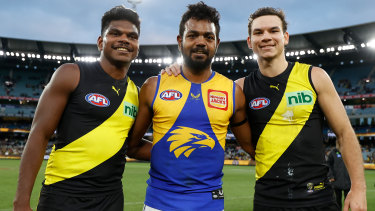 But he pulled up with a tight hamstring in the early stages of the third quarter, with medical sub Kane Lambert coming on to the field midway through the term.

The Tigers meet the Suns next week in a clash that will define Gold Coast’s season.

In their premiership years, the ability of Richmond’s small forwards to pressure and hit the scoreboard was arguably their greatest asset.

That was back on display on Sunday, with Tom Lynch and Jack Riewoldt relatively quiet in comparison in the opening half.

Dan Rioli (running off half-back), Shai Bolton and Marlion Pickett kicked three consecutive goals early in the second term to give the Tigers a bit of breathing space.

Jamie Cripps got one back for the Eagles after Shannon Hurn took an intercept mark at half-back, but Bolton got his second shortly after when he caught Jamaine Jones holding the ball.

Maurice Rioli jnr got one of his own a bit later, while winger Kamdyn McIntosh and defender Josh Gibcus also hit the board just before half-time, capitalising on forward-half turnovers.

Riewoldt and Lynch got their lick of the ice-cream in the second half, finishing with five goals between them.

The AFL altered its 50-metre protected area rule this weekend, waving play on when players split behind the kicker, rather than penalising the wrong-footed defender.

But the protected area remains protected, and Liam Ryan found out the hard way in the first quarter against the Tigers.

Jack Riewoldt had marked about 60 metres out for goal, when running defender Daniel Rioli ran past with Ryan on his tail. But Ryan shaped to smother Riewoldt, who looked to be playing on, but the umpire penalised Ryan and took Riewoldt to the top of the goal square for a certain goal.

Jayden Short was then penalised late in the second term for running too close to Jack Petrucelle.