Anything Liverpool can do, so can we! Celtic hit NINE past Dundee United, with Kyogo Furuhashi and Liel Abada both scoring hat tricks past the embarrassed hosts

Contents
Anything Liverpool can do, so can we! Celtic hit NINE past Dundee United, with Kyogo Furuhashi and Liel Abada both scoring hat tricks past the embarrassed hostsMATCH FACTS AND RATINGSShare this article

Celtic’s highest away win in the league since an 8-1 thrashing of Dunfermline in February 2006 was a brutal affair, an illustration of the growing chasm between Celtic, Rangers and the other teams in the SPFL Premiership.

Five straight wins, 21 goals scored and one conceded. For Premiership rivals a relentless start to the season from Scotland’s champions is becoming an ominous business, adding to the crisis surrounding a spineless Dundee United team and despatching a warning to Rangers ahead of next weekend’s first Old Firm of the season. 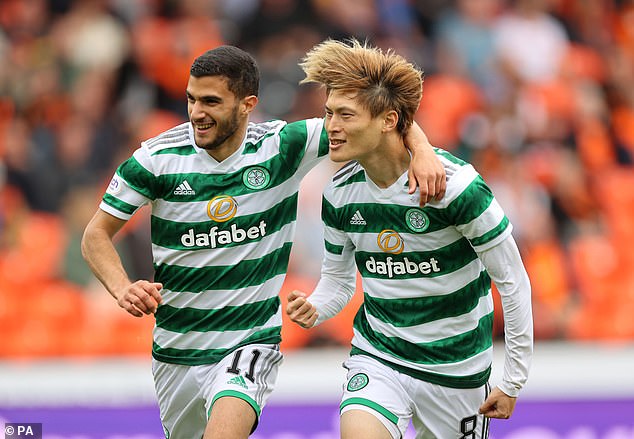 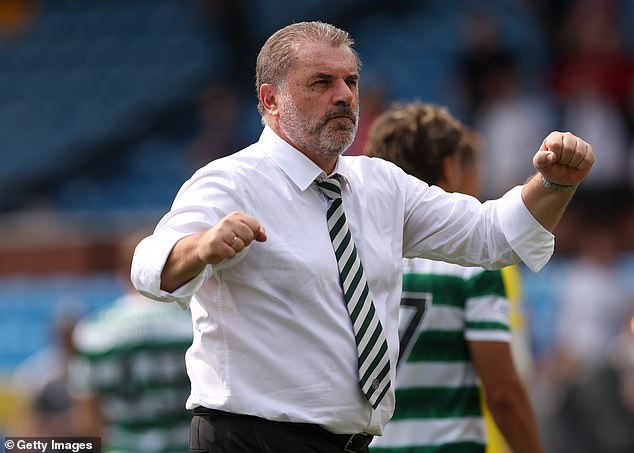 Ange Postecoglou’s side have won all five games and are top of the table, scoring 21 goals

When Kyogo Furuhashi completed the second hat trick of his Celtic career before half-time the Sky cameras cut to Jack Ross scribbling notes on a piece of paper.

Heading for the biggest home defeat in the Scottish Premiership era there was a strong case for the first two words reading ‘dear Chairman.’ Frankly, it’s hard to see how United’s manager survives this.

A porous Tannadice side have now shipped 24 goals in five winless games. They shipped seven goals to AZ Alkmaar in an alarming collapse. Between the 40th minute here and the 60th here they conceded six goals.

Whatever he tries makes no difference. Fourth place finishers in last season’s Premiership they can’t go on like this or relegation will be the inevitable consequence. 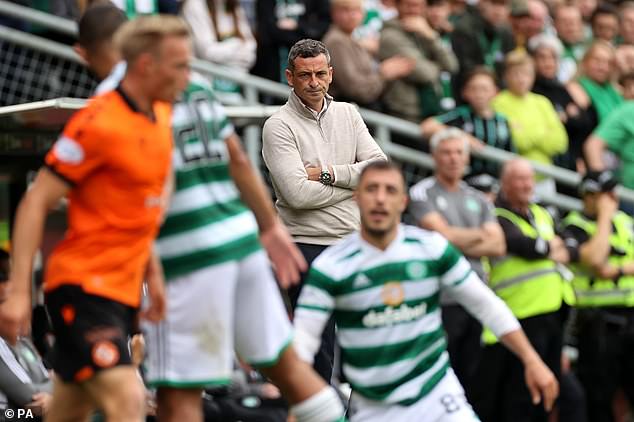 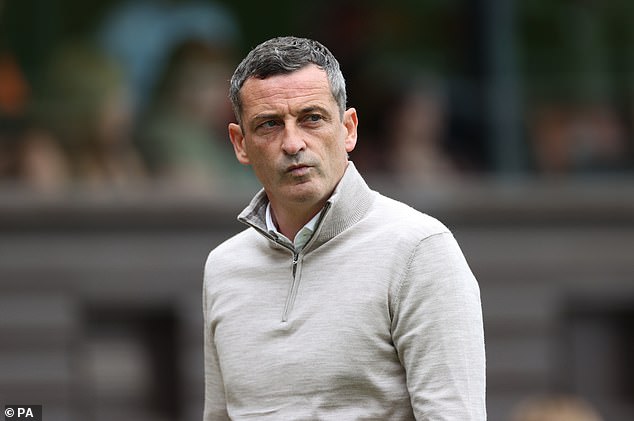 Ross’ side are rock bottom of the league, picking up just one point from five games so far

Oddly, United actually started as if they meant business. With the first chance of the game Joe Hart suffered for his art when he was clattered by Steven Fletcher as he bravely clawed away a bouncing netbound effort from Glenn Middleton.

Fletcher earned a harsh yellow card for attacking a loose ball he had to go for and you wondered if this was the day the Tangerines finally found a spine. As Hart received lengthy treatment for a head wound they reverted to type.

As in the Europa Conference League defeat in Holland they collapsed in pitiful fashion before and after half-time, Celtic’s front six tearing them to shreds. 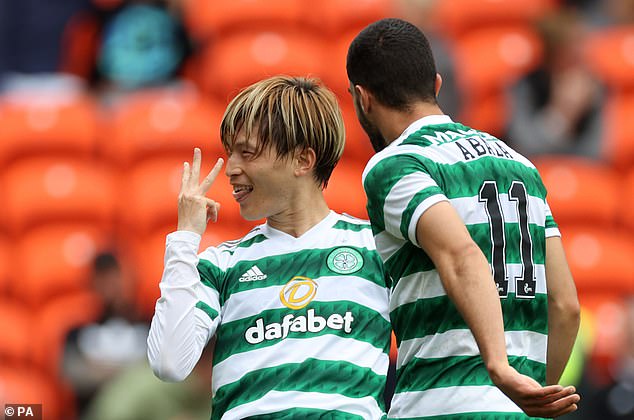 When Carl Starfelt added a ninth goal with nine minutes to play the away support chanted, ‘we want ten.’ When David Turnbull’s header bounced just short of the line they almost got it.

With five different goalscorers, Kyogo claimed the first the first of two Celtic hat tricks. Playing in the same front three as the Japanese and Jota for the first time this Liel Abada claimed the other when he made it 8-0 after 77 minutes. By then Dundee United just wanted the pain to stop.

Abada didn’t score the opener after 16 minutes, but the vision and intelligence did create it. Bypassing an offside Furuhashi, a piercing pass down the left channel for Jota invited a quick cross. Taking a touch to control, Celtic’s goalscoring talisman calmly made it four goals in four games. 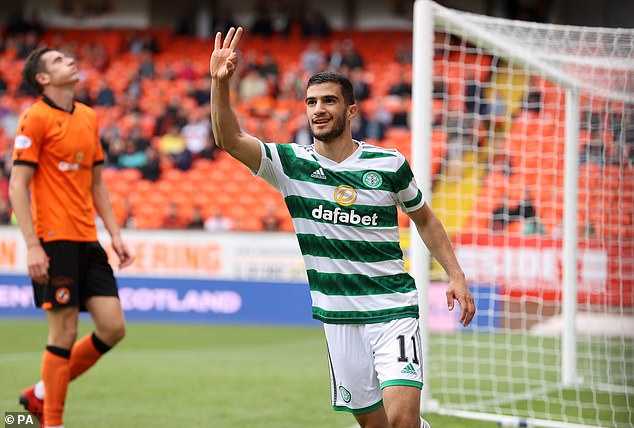 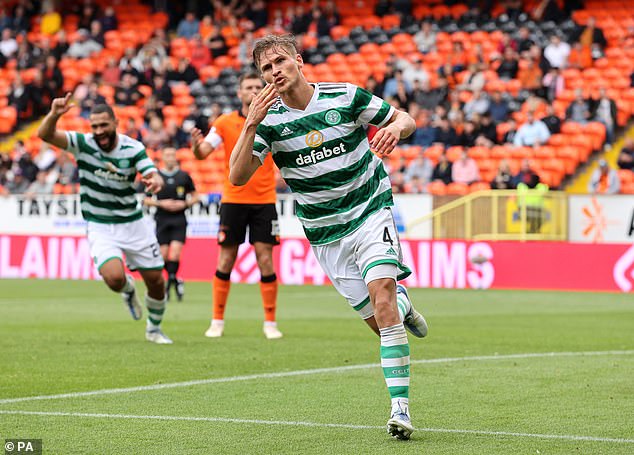 With five players under-22 or under the energy and pressing of the home side might have actually found a way back into the game when Scott McMann snapped into a tackle and Glenn Middleton thumped a low 18 yard strike inches wide of goal. A brief slither of hope, the dam burst completely before half-tie.

Celtic scored a goal from nothing after 40 minutes and the game was effectively over. The quality of the first time looping, dipping Kyogo 20 yard strike which gave Eriksson no chance would knock the stuffing out of any team. Even so, United’s collapse was woeful.

Kyogo’s second Celtic hat trick arrived in the 45th minute when a delightful Hatate dummy saw O’Riley sling a cross towards the back post. Sidefooting the ball across goal the top scorer had a simple task to guide the ball into the net for 3-0.

They weren’t done yet. In the time added on for Hart’s early injury Matt O’Riley assist teed up the simplest of chances for Jota to pile United’s agony on before half-time.

At the home of the stadium home supporters started leaving in their droves. Not yet half-time you could hardly blame them. Remarkably, the second half was even worse. Utterly cringe-inducing for the home supporters still in the ground.

The visitors played their way in behind the home defence with ridiculous ease. Jota’s cut-back was tapped in by Abada for 5-0 after 50 minutes. A Josip Juranovic strike from 18 yards crept past the slow five of Carljohan Eriksson five minutes later for six. 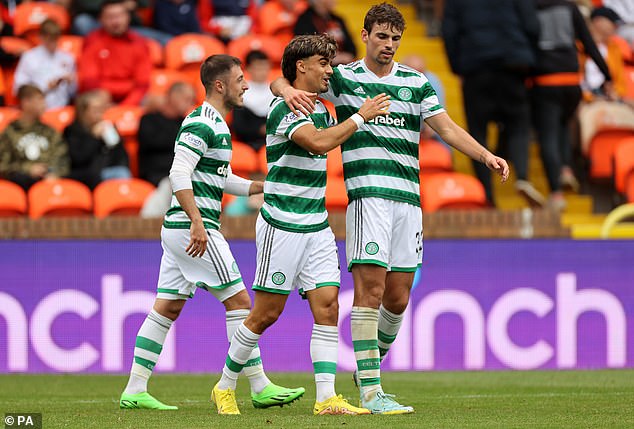 Jota (centre) was in fine form, scoring the visitors’ fourth goal after setting up the opener 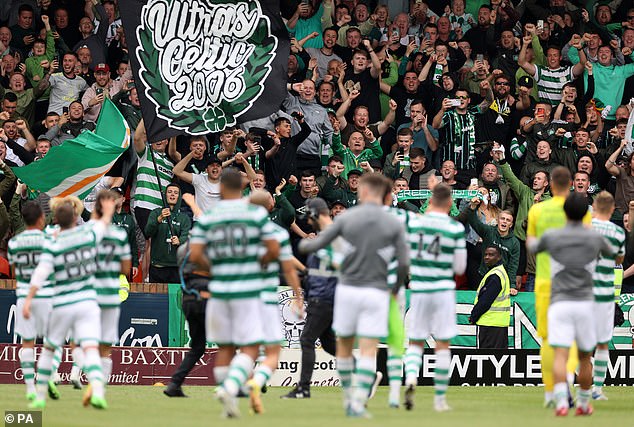 Seven came when Hatate cut the ball back across goal for Abada’s second – the Israeli winger claiming his hat trick 13 minutes from time when he chipped Daizen Maeda’s mis-hit effort into the net at the back post.

Carl Starfelt finally claimed his first Celtic goal at Kilmarnock the other week and, like buses, they’re all coming at once now. A headed goal from a corner showed that, whatever Liverpool could do against Bournemouth, Scotland’s champions could do in Dundee.

Deprived a tenth straight title two seasons ago Postecoglou’s side almost claimed the ten at last when Turnbull’s header came close to crossing the line. There was no need for more bickering over referees here. Even a Scottish referee couldn’t stop Celtic on a day of free-flowing, thrilling, attacking football.