Leading into this game against the defending premiers, Brisbane Lions coach Chris Fagan was blunt about his team’s prospects. Melbourne had won their last three encounters against the Lions handsomely – the last time by 64 points in round 15.

By half-time at the Gabba on Friday night, the lead was already 66, the home crowd stunned.

Contested ball, Fagan had said, would be the key for the Lions: “It’s a waste of time talking about anything else.” Well, they failed again on that metric – but statistics alone don’t tell the story of the Demons’ demolition job.

Melbourne were ruthless. It was also their night. They slotted goals from everywhere, four of them to Kysaiah Pickett in the first half. When Christian Petracca bounced one over the head of a hapless Jarrod Berry late in the second quarter, the game was done.

The final margin was 58 points. The Brisbane Lions had set themselves for this game, with a top four spot on the line, and had been humiliated in front of their own fans. They now need both Collingwood and Fremantle to lose to hold on to a double chance in September.

The Demons have just one worry coming out of the game, with Luke Jackson coming off late with what will be hoped is just a niggle to a knee. Christian Salem was a late out with groin soreness. 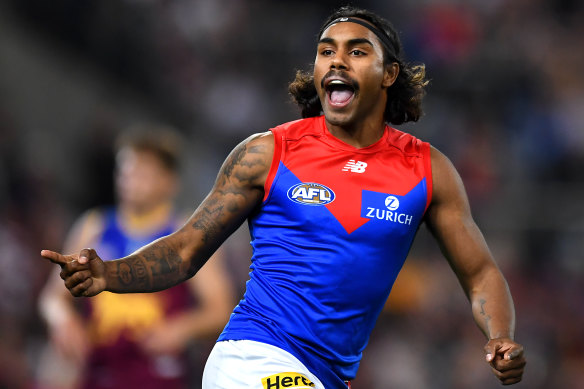 There was also an incident at three-quarter time when Melbourne defender Harrison Petty was visibly distressed and Demons football manager Alan Richardson and his counterpart Danny Daly had an exchange. There was more than a little feeling in this game.

Again, the Demons were harder, Clayton Oliver setting the tone from the opening bounce, driving the ball forward, Pickett cleaning up the crumbs with just 20 seconds gone. Minutes later, Jake Lever roosted home his first goal for the year after Eric Hipwood fell into his back.

His teammates celebrated hard with the defender, and very soon, things started spinning out of control for the Lions. They began to play the way Melbourne wanted – conservatively – and Steven May began directing traffic from the backline like a lollipop man after school.

The Lions’ turnovers began to mount, which the Demons punished with relentless accuracy. When under pressure, Melbourne’s dominant midfield struggles to find their forwards. Here, as the Lions coughed the ball up, opportunities opened up everywhere.

Pickett, enjoying the best patch of football in his career, was an electric presence, but he was also given an extraordinary amount of space. Lions defenders will be waking in fright after a dirty night where they were systematically pulled apart.

Lachie Neale and Hugh McCluggage, as ever, tried hard and were Brisbane’s best. But there was no need for Melbourne to lock down on Neale. They simply backed their own bigger, stronger and deeper midfield to get the job done.

Angus Brayshaw, relishing his return to the centre square, was again enormous. Petracca and Oliver were as ever; Oliver won’t have done his Brownlow medal chances any harm with another dominant performance. James Harmes made a timely return.

It was a warning to Melbourne’s rivals. They are far from done yet. You could throw a blanket over them; they didn’t have a player who failed to contribute on the night, and found a level they’ve seldom reached this season.

They’ve found it twice now against the Lions, who were again left exposed. They were undisciplined and embarrassed, and look a fair way short of the serious September challenge.