Check back throughout the day for further updates

Western Bulldogs captain Marcus Bontempelli insists he has recovered from an adductor issue and will be fit for an elimination final against Fremantle next weekend.

Bontempelli has been battling a groin issue while still taking to the field but said on Friday he will make the trip west to Optus Stadium. 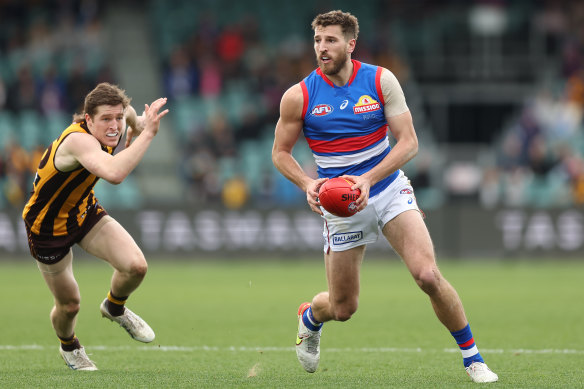 Marcus Bontempelli had been nursing an abductor issue but now says he has fully recovered.Credit:Getty Images

“It wasn’t as bad as what was put out – it was more of an overload result from a corkie the previous week,” Bontempelli said.

Bontempelli had been in doubt for the round-22 clash against Greater Western Sydney because of injury but played, and took on Hawthorn last weekend, when the Bulldogs edged into the top eight after Carlton’s demise at the MCG.

Coach Luke Beveridge had said Bontempelli had been dealing with various “niggles” through the season.

“He [Beveridge] was correct in the fact that we had a bit of a sit down and a chat about it,” Bontempelli said.

“I know where my body’s at, so it was a good discussion around it, but I’m feeling pretty good and I’m definitely over the adductor stuff now, which is good.”

The pre-finals break could not have come at a better time for the champion midfielder, as the Bulldogs again mount a premiership run from outside the top four, having made grand finals in 2016 and 2021 respectively from seventh and fifth on the ladder.

“The pre-finals bye does present that opportunity to freshen your mind and your body up and get set to go for another finals series,” Bontempelli said.

However, the Bulldogs were beaten by 17 points in their lone meeting with the Dockers this season in round 21 when Rory Lobb booted four goals at Marvel Stadium.

The post ‘Definitely over the adductor’: Bontempelli to make trip west first appeared on europesportsnews.com.