DANNY MURPHY: Man United’s biggest error? Failing to land Jurgen Klopp… he would have won trophies and brought them to his way of thinking. It might have been a harder job than Liverpool, though!

The biggest compliment I can give Jurgen Klopp is that every Manchester United fan who barracks him tomorrow night would actually love to have him at Old Trafford.

Contents
DANNY MURPHY: Man United’s biggest error? Failing to land Jurgen Klopp… he would have won trophies and brought them to his way of thinking. It might have been a harder job than Liverpool, though!James GarnerDarwin NunezShare this article

There’s little doubt Klopp’s move to Liverpool in 2015-16 instead of replacing Louis van Gaal at Old Trafford — as United had considered — has changed the history of both clubs.

I’m convinced if Klopp were manager of United, they wouldn’t have gone five years without a trophy — and Liverpool wouldn’t have won everything, unless they’d somehow managed to get Pep Guardiola instead! 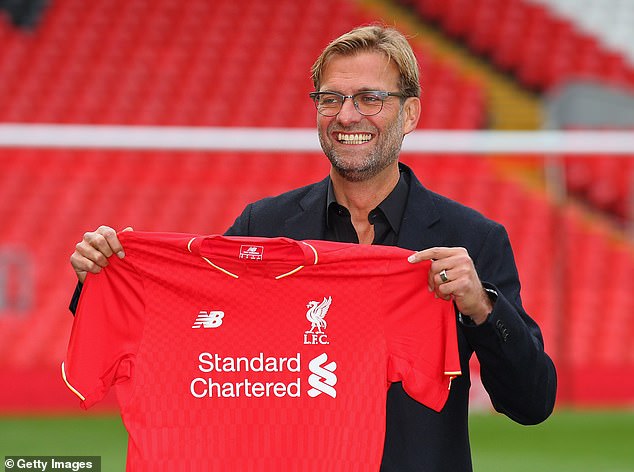 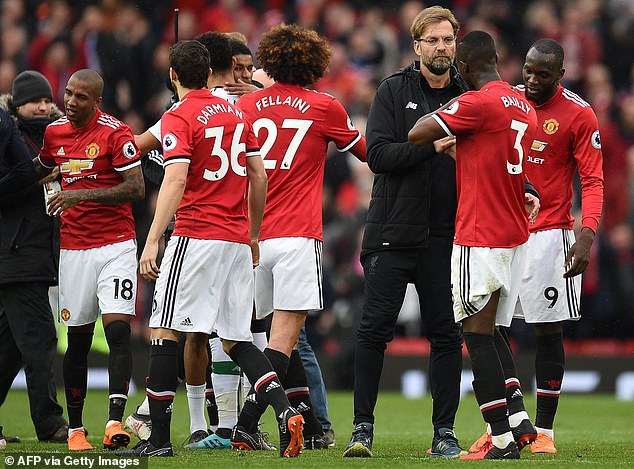 EXCLUSIVE: Leon Edwards on UFC 278, Usman and his shot at history

United might have been a harder club for Klopp to manage — the pressure is on for marquee signings and you wonder about the executive reaction if he told them he wanted Sadio Mane from Southampton rather than Paul Pogba in 2016.

But I believe Klopp would have overcome it all, even at Old Trafford. He is strong-minded, knows how he wants to play and the players who fit into that.

He wouldn’t have been dictated to but he’d be the first to acknowledge he had an advantage going to Liverpool, where Michael Edwards was already there as technical director and played a huge part in recruitment.

My gut feeling is he would have brought United to his way of thinking rather than the other way.

He’s a perfect fit at Liverpool but the really great managers can transfer their skills to any club and make it work. It’s because they are great leaders, have the charisma and ability to integrate into a city and with its supporters, and of course have expertise in coaching and improving players.

To have all those talents is rare and having missed out on Klopp, United have failed to find anyone close. 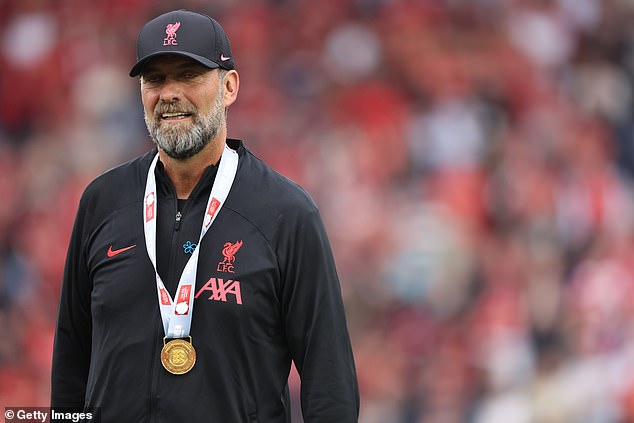 You know what you get from a Klopp team: dynamism, work ethic, risk-taking, never-say-die attitude, creativity. His Liverpool have a real identity even if two draws so far this season is below par.

At United, the Glazers are criticised but they have given their managers more money to spend than Liverpool have. For whatever reason, the managers, executives or recruitment department haven’t made enough good decisions and United still don’t have a consistent identity when you watch them. They might press one week, play a low block the next… there is no stability.

Look at how players improve under Klopp. Andy Robertson from Hull, Gini Wijnaldum from Newcastle after they’d been relegated. Jordan Henderson’s game has come on massively in the last few years.

The brilliant Joel Matip cost less than £5million — a fraction of what United have paid for four centre-halves: Maguire, Varane, Lindelof and Bailly.

Would United have allowed Klopp to work on Robertson rather than pay £50million for an established Premier League full-back? You’d like to think if they’d given him the job, they would have backed him. 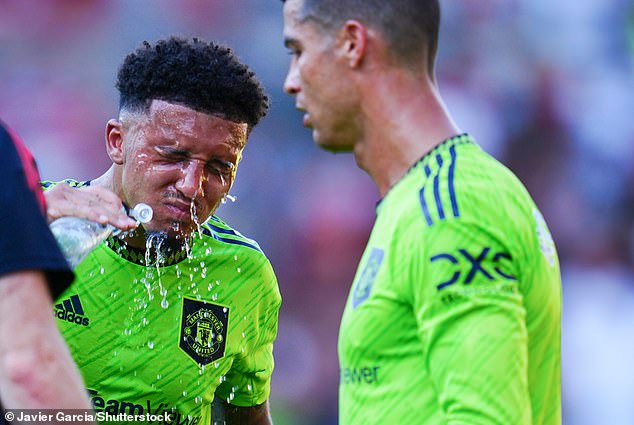 Players have responsibility too for how they perform but there is no doubt in my mind that the culture established by a manager impacts on individuals. I am thankful Gerard Houllier came at the right time for me in my career. If he’d arrived a year later, I might have already left Liverpool without making an impact.

Jadon Sancho is not the player we saw at Dortmund but in a year he’s had to fit in with four different managers: Solskjaer, Carrick, Rangnick and now Ten Hag. It’s no way for a player to develop properly.

Marcus Rashford would have benefited from having the same high standard of training every day, the man-manager who knows when to put an arm round the shoulder and when to give a kick up the backside.

As a Liverpool fan, I am delighted that my club made their move for Klopp early and sold him the concept of the club and the city being entwined. Liverpool’s gain was United’s loss. The United fans know that and would still take him — unfortunately for them, it’s never going to happen!

Manchester United aren’t yet ready to play the Ajax way under Erik ten Hag. As a long-term plan, it’s laudable but in the short term with the players short of confidence against Liverpool, he should do everything to try and get a result, pretty or not.

It’s not even a case of United learning to walk before they run – they need to crawl before they can walk.

I think United have to be pragmatic as Michael Carrick was in getting a draw at Chelsea last season. Carrick went to Stamford Bridge with a midfield three of McTominay, Fred and Nemanja Matic.

Matic has gone but rather than put a Bruno Fernandes or Christian Eriksen in, I’d give James Garner his first United start.

I watched Garner on loan at Nottingham Forest last season where he played as a holding midfielder and as a No8 and was comfortable in both roles. He is technically superb and courageous enough to take on that deep role for United if needed.

I’m not writing off Bruno or Eriksen for the season but the way they played at Brentford, you can’t rely on them against Liverpool. United’s interest in Real Madrid’s Casemiro underlines they see holding midfield as a priority.

It would be a big call for ten Hag to leave the both out but he’ll know the priority is getting a result rather than worrying about reputations. Put square pegs in square holes. Have three workers in midfield, wingers who know that position, and a centre-forward who knows how to score goals.

Liverpool are going to be dangerous after dropping points themselves this season but if United are going to compete, this would be my starting XI: De Gea: wan-Bissaka, Maguire, Varane, Shaw; McTominay, Fred, Garner; Sancho, Ronaldo, Rashford 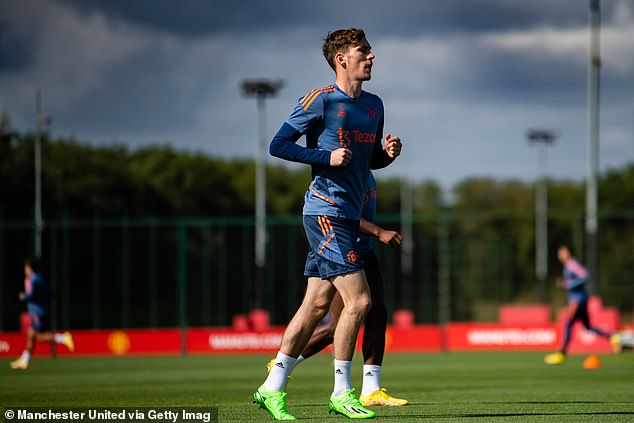 I was at Anfield for Darwin Nunez’s red card against Crystal Palace on Monday night. It’s obviously a great shame for him because I saw a lot of good things and high energy in his performance. I think he snatched at a couple of chances and when he couldn’t convert from Mo Salah in the second half, the frustration got too much.

It’s hard to describe the emotion and passion you feel making your home debut and it can be hard to control. Most players have done something in their careers that is so out of character, you look at the incident back and you don’t recognise yourself.

It was clear the adrenalin was pumping inside Nunez to headbutt Joachim Andersen but while those mistakes can’t happen regularly, there is nothing in Nunez’s past that suggests he will be a serial offender. I think it is going to be a one-off and the realisation this weekend that he is missing one of the matches of the season at Old Trafford should be enough to stop him re-offending. 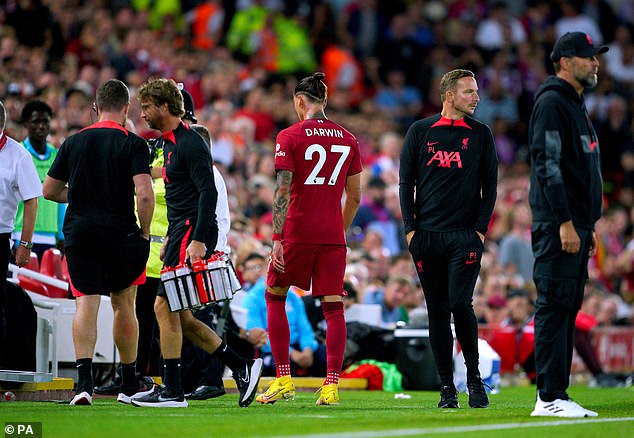