The British Grand Prix burst into madness just moments into the first lap after Zhou Guanyu was at the centre of a worrying crash on the opening turn. But further disaster could’ve easily struck at Silverstone, with a group of protestors pictured on the track after storming a fence.

Just seconds after lights out in the British GP, George Russell tried to battle back after a bad start resulted in a fight for position with Pierre Gasly and Zhou. Russell swerved to the left to find some room, clipping Gasly’s Alpha Tauri and making contact with Zhou’s right rear wheel.

It catapulted the Chinese star into the air, and he was sent flying off the track and into the barrier while upside down in a horrifying scene. Alfa Romeo have since confirmed he is OK, and TV coverage has confirmed he was seen on a stretcher but moving in the aftermath.

But weirdly, with all drivers involved seemingly OK, the crash could’ve been a blessing in disguise, with even worse scenes threatened by a group of protestors who made their way onto the track during the first lap. A red flag stopped racing before the drivers reached them at full speed, potentially evading disastrous scenes at Silverstone.

JUST IN: George Russell in horror crash as car flips upside down at British GP 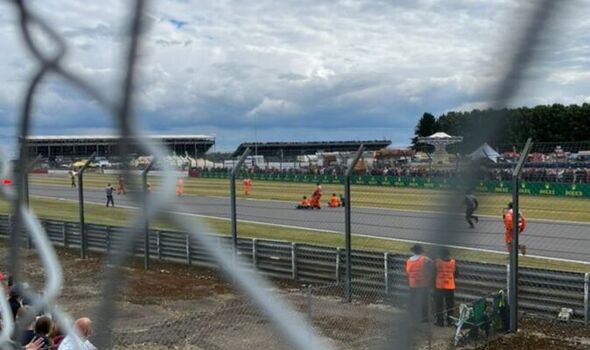 The FIA and F1 have since confirmed that shortly after the crash, ‘several’ protestors entered the track. A statement reads: “We can confirm that after the red flag, several people attempted to enter the track. These people were immediately removed, and the matter is now being dealt with by the local authorities.”

One spectator has claimed those culpable were dragged off the track while lying down by Marshals before police arrived at the scene to arrest them. The police were expecting some form of protest after receiving ‘credible intelligence’ leading up to the race and responded quickly when the protest was staged. 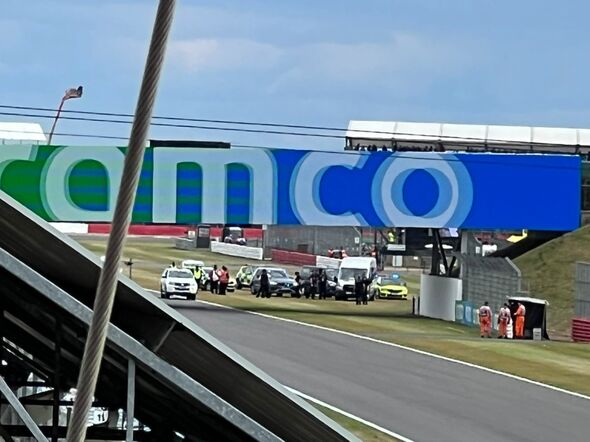 For the latest news and breaking news visit:https://www.express.co.uk/sport
Stay up to date with all the big headlines, pictures, analysis, opinion, and video on the stories that matter to you.
Follow us on Twitter @DExpress_Sport – the official Daily Express & Express.co.uk Twitter account – providing real news in real-time.
We’re also on Facebook @DailyExpressSport – offering your must-see news, features, videos, and pictures throughout the day to like, comment, and share from the Daily Express, Sunday Express, and Express.co.uk.