Boxing fans have been left disgusted by the pay-per-view price of Anthony Joshua's bout with Oleksandr Usyk on Saturday evening.

Joshua is looking to win back his WBA, IBF, WBO and IBO heavyweight titles – which he lost to Usyk last September. And boxing fans were looking forward to getting their hands on tickets for the rematch, but it was taken to Saudi Arabia where they can't realistically get to.

And fans will have to part ways with £26.95 if they want to watch the bout on Sky Sports Box Office. And the steep price has left some fans furious that they can't watch the rematch.

"Do people honestly pay for Sky TV, Sky Sports package, *and then* pay £26.95 for a boxing event? How are you so rich?" one fan questioned. While another simply labelled it as a "joke".

Another added: "Getting really hyped for the fight tonight although Sky’s £26.95 has taken the edge off." While a fourth said: "£26.95 for Joshua's fight. Has boxing heard of the cost of living crisis? I’ll either sleep or listen on the radio."

"In an era where more people are struggling to just put food on the table and Sky want £26.95 for this…greed doesn’t even begin to sum it up," a fifth fumed.

What do you think about the £26.95 price for the bout? Let us know in the comments section 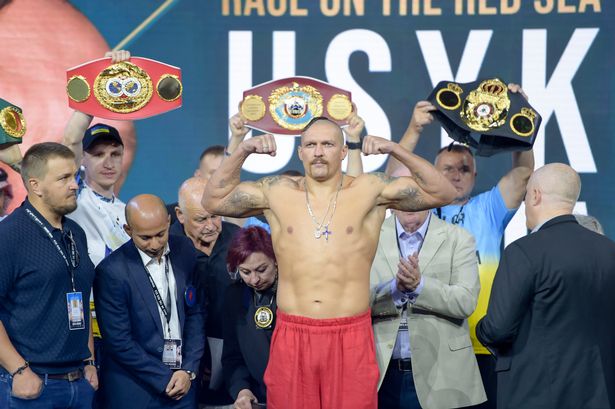 In contrast to the price in the UK, Usyk made sure the fight was broadcast for free in Ukraine.

Usyk is hoping to deal a knockout blow to both Joshua and Vladimir Putin – who invaded Ukraine in late February. He said: "This is a great motivation for my people. My Ukrainian people must see this match.

“We are currently at war. Free broadcasting is very important, the money that people could have used to buy the broadcast, they can use to help someone.”