The Essendon and Port Adelaide hitout was a good test for both new teams, with Port controlling more of the first half before Essendon broke away in the second. The Bombers, despite a sluggish start, finished the day with a 27-point win, with Bonnie Toogood enjoying a three-goal haul. 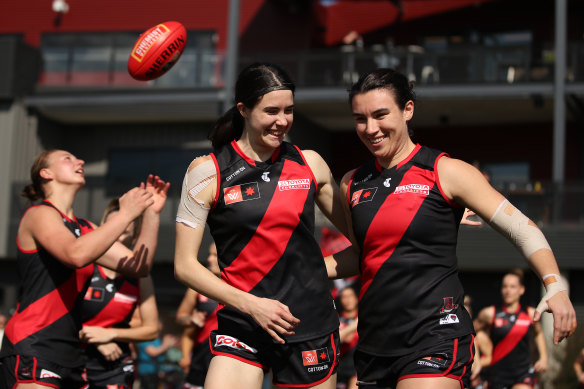 The Bombers run out at the Hangar for their practice match against Port Adelaide on Saturday.Credit:Getty Images

Port Adelaide showcased depth in the midfield, often getting more numbers around the contest, with Kate Surman having a particularly good game and using her pace to drive the ball forward, along with new draftee Yasmin Duursma.

When controlling the ball, Power moved it quickly and linked up well across the ground, driving it to a crafty and experienced forward line, with Gemma Houghton booting two in the opening half.

Port’s attack suggested it could be a real strength for the side, especially if they can keep the pressure up. They rested six key players after the first half, including Houghton, Jacqui Yorston, Ange Foley, Surman, Indy Tahau and Justine Mules, to give way for younger players to get a run, who couldn’t match Essendon’s increased intensity.

“Across the team, there’s a lot of really big steps forward, particularly the midfield at stoppages, we were really happy with,” Port Adelaide coach Lauren Arnell said afterwards. 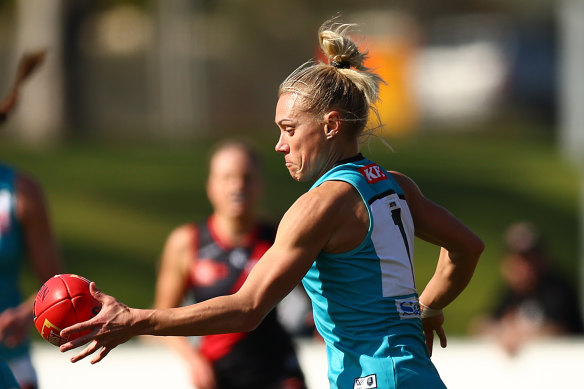 “We gave away some pretty simple scoring opportunities to Essendon in that second half, which we will take a lot of learning from and acknowledge that we’ve got a group of girls who are 18, 19, 20 [years old] and it’s really their second exposure at this level.

“[I was] really happy with our ability to execute our game style and put out our strongest team in that first half.”

Essendon, on the other hand, took some time finding their feet during the opening half but returned from the main break with increased ferocity and intensity, and were rewarded for it on the scoreboard.

Maddy Prespakis got busy in the midfield, while premiership player Toogood was a source of both leadership and star power, and newbie Paige Scott labelled herself as one to watch, both defensively and offensively. 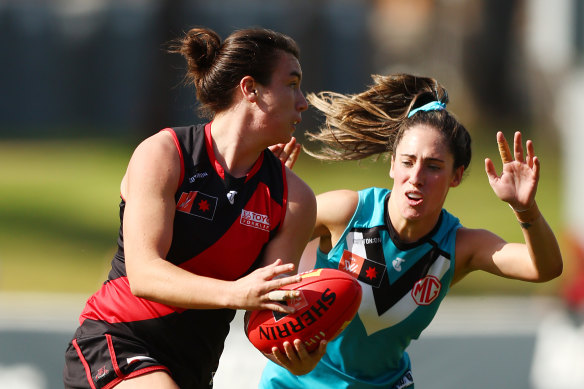 Bonnie Toogood had instant impact for the Bombers.Credit:Getty Images

Renee Tierney proved a reliable marking target, taking grabs in both forward pockets, while Amber Clarke, who went in the draft at pick four, was a good link up at half-forward and Frederica Frew proved dangerous in front of goal with two majors in the final quarter. When Port were in attack, Essendon’s defence did a good job of holding strong, much to the credit of Mia van Dyke.

In Blacktown, Sydney suffered a five-goal loss to Collingwood as they made their AFLW start, but were able to sustain pressure for long bursts against the much more experienced opposition, including around the contest.

The Swans’ list doesn’t feature a lot of previous AFLW experience, making coming up against a finals-experienced team in Collingwood a tough ask. However, the new kids on the block kept things looking pretty even until half-time, before the Pies took control in the second half as the Swans’ defence began to falter.

Sydney coach Scott Gowans said he was pleased with the plenty of positive signs he saw from things the team have been working on at training. 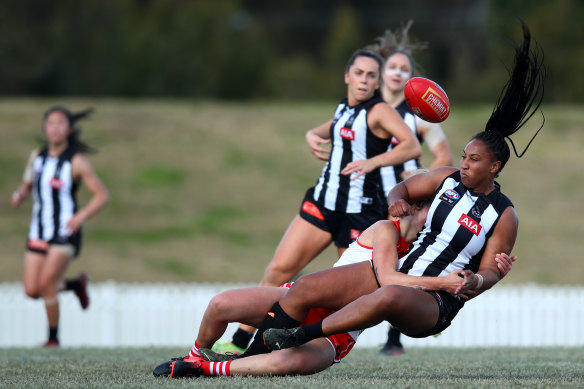 “When Collingwood got momentum in that second half, we were struggling to stop it and that’s something we will be working on next week,” said Gowans.

“What do we do, what are the mechanisms we can use just around things like communication, on-field leadership as far as the collective group, players being able to get their teammates up and going, those types of things.”

“We have touched on team defence but not a lot and it showed so that it’s something we need to spend more time on but I was really pleased with that first half. I thought there were some really good elements to it, clearances, time in forward half etc.”

In other news, Fremantle star forward Ebony Antonio injured her right knee in Saturday’s clash against West Coast and was helped from the ground.