When Jai Opetaia steps into the ring for his world title shot against Mairis Briedis on Saturday, it will mark the anniversary of one of the biggest boxing upsets on Australian soil.

Opetaia’s task is perhaps even more formidable; the Australian, having only recently recovered from serious hand and rib injuries, takes on the IBF and Ring Magazine cruiserweight title-holder, whose only loss was a close points decision to undefeated heavyweight champion Oleksandr Usyk.

The career of the local hope, a $4 outsider with some overseas bookmakers, has been so hampered by COVID-19 and injuries that the Briedis clash will be the first time he has stepped into the ring for 18 months.

When Opetaia made history as Australia’s youngest-ever Olympic boxer at at the 2012 Games in London – he was just 17 at the time – Horn was one of his teammates.

“It’s a massive fight and five years since I beat Manny Pacquiao, so it’s a momentous occasion for Australian boxing,” Horn said. 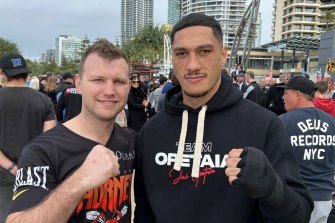 “It’s really cool he gets to do it on the same day that I did. He’s got a big challenge in front of him, it’s a tough job but I’m sure he’s done the work and has the belief in himself that he can do it.

“The 2012 crew from the Olympics have done really well in the professional boxing ranks and hopefully he continues that.

“He’s got a lot to talk about if he’s able to get this victory. He’s had a hell of a lot of things to go through to get to this position.”

Opetaia’s promoter Dean Lonergan, the man who made the Horn-Pacquiao bout happen, reckons the task facing the Australian at the Gold Coast Convention Centre is even greater than the challenge “The Hornet” faced on his own July 2 reckoning day.

“In my opinion, this would be the greatest upset in Australian boxing history,” Lonergan said.

Briedis has a relatively low profile for a boxer so highly credentialed, having fought and beaten the very best all over the world. One of the judges scored his thriller against Usyk a draw, with the other two giving it to his opponent by the barest of margins.

Which is why Lonergan shelled out almost $2 million to ensure the event was staged locally.

“This fight has cost me a fortune to put on, but I wanted to give him every single advantage we could by doing it here and not in Latvia,” Lonergan said. 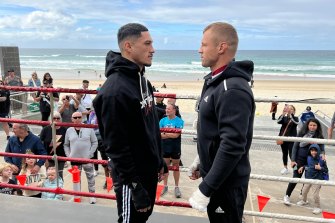 Australian boxer Jai Opetaia faces off against Mairis Briedis ahead of their world title fight.

“Five years with a broken hand. He wasn’t able to spar for more than six rounds before his hand would swell up. That’s the way he thought he had to do it to keep making money.

“We sat out for a year to get that fixed and then he gets this unbelievable injury. The pain associated with broken ribs and rib cartilage injuries is incredible and for him to come back seven weeks after that to have a fight is nothing short of incredible.”

Opetaia fractured his thumb in the amateurs, fractured his hand twice in his first professional bout and has fought through the pain to assemble an imposing 21-0 record. The Briedis bout was then postponed when the 26-year-old had his ribs busted in sparring.

The surgery scars present a clear target for Briedis, a setback which could make an Opetaia victory even more unlikely than the one achieved by Horn.

“I don’t think it will be a bigger upset, because I know how good Jai is,” Horn said.

“I’d be very interested in those [odds] and see what they’re paying for him to win.”